The Green Ghana Project is a great green pillar 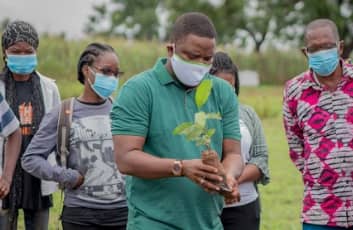 In 2007 the African Union endorsed a project dubbed the Great Green Wall for the Sahara and the Sahel Initiative. It had taken years of deliberations among the Community of Sahel-Saharan States to bring the idea into fruition.

The Great Green Wall involved planting a wall of trees stretching across the entire Sahel from Djibouti in the East to Senegal in the West. With a length of nearly 8,000 kilometres – ten times the distance from Accra to Lawra or Damongo – and 15 kilometres wide, the trees were to serve as a buffer to combat desertification of the Sahel region and hold back expansion of the Sahara Desert.

Back home in Ghana the Ministry of Lands and Natural Resources has instituted an annual Green Ghana Day under a Green Ghana Project. It comes after an on-going Youth in Afforestation Programme and aims at protecting existing forests and wildlife resources and restoring degraded landscapes in the country. Also, in the words of His Excellency, President Nana Addo Dankwa Akufo-Addo, the project would inculcate in the youth the value of planting and nurturing trees. Ultimately, it helps to mitigate and adapt to climate change. A re-afforestation programme is one logical way to mitigate the effects of climate change in any country.

A bird’s eye view of the vegetation of Ghana and how we managed this natural resource will enable us appreciate the current state of tree cover in Ghana. Broadly speaking, we have four main agro-ecological zones in Ghana. These are Coastal Savannah, Forest, Transition and Guinea Savannah.

Guinea Savannah is the largest and is located in the north. It is predominantly grass interspersed with trees. Shea butter, acasia, baobab, dawadawa and the “famous” rosewood are found there.

The Coastal Savannah lies at the south of the country. It is an area of grass, shrubs and few trees.

The middle section, and extending to the south-western part, is the Forest zone. It consists of tropical rain forest and moist semi-deciduous forest. This is where we have most of our valuable timber species like Mahogany, Wawa, Odoom and Sapele.

As the name suggests, transition lies between the forest and northern savannah and where tree cover is less dense than in the forest zone.

At the turn of the twentieth century in 1900 Ghana had 8.2 million hectares of forest. In order to protect water bodies, biodiversity, land and the environment in general, the colonial government created over 200 forest reserves covering an area of about 1.6 million hectares in the 1920s to the 1940s.

Ghanaians continue to derive numerous environmental benefits from our forest resources. Those in the wood industry, for example earn their livelihoods from forests. Similarly, it is estimated that a substantial amount of rural household income is obtained from non-timber forest products.

As a nation, we need the foreign exchange from timber. We need the food and raw materials from agriculture. So also do we need clean air, clean water, biodiversity and energy for cooking. What matters most is how we extract these things to make a living.

Regrettably, the overexploitation of natural resources through illegal and unsustainable logging and mining, agricultural expansion and urbanization cause much havoc to our forests. Population growth, bush fires, charcoal production and poverty are other human related factors. There is no doubt that climate change – long droughts in particular – contribute to the rapid depletion of our forests to the extent that only 35 percent of 1900 area exists at the moment.

It is in response to the combined effects of forest degradation and climate change that the Green Ghana Project was launched. This initiative is aggressive, nationwide, more inclusive and apparently cost-effective compared to previous re-afforestation projects. Meanwhile, in the past two years a day was set aside as Green Ghana Day.

The first Green Ghana Day in 2021 realised seven million tree seedlings planted exceeding the target of five million with estimated survival rate of 80 percent. The enthusiastic participation might have informed a higher target of 20 million for the 2022 edition. Ten million trees were consigned to degraded forest reserves and the other half to farms, institutions and open spaces in urban areas.

Participation in the 2022 edition was equally enthusiastic, if not more. From the President and top government officials, chiefs, religious leaders, foreign diplomats to students and ordinary Ghanaians, all hands were on deck. The non-political manner of participation must be commended and sustained. Tree planting should become a passion of the nation next to soccer.

It is furthermore suggested that each community be sensitized to identify its peculiar needs, for example, erosion control, watershed management, woodlot, income diversification etc. for planning purposes in future.

Major outcomes were expected of which the following stand out strongly:

In conclusion, deforestation and its associated problem of land degradation affect all Ghanaians. Trees are a renewable natural resource and should not be allowed to deplete completely. We have to surmount every obstacle to reverse the decline of tree cover.

The Green Ghana project is therefore in the right direction. Further actions need to be taken to reduce poverty and make Liquefied Petroleum Gas (LPG) accessible and affordable.