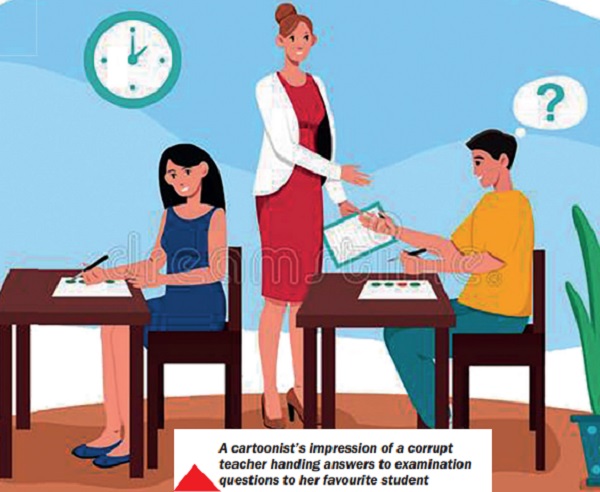 Two years ago, a student approached his new postgraduate lecturer who had just finished taking his new students through the semester’s course outline. The student (by hypothetical name: Osei) asked the lecturer if he would sell handouts to them as did his undergraduate lecturers.

Upon enquiry, Osei explained to the lecturer that during one of his undergraduate courses, he assumed if he attended classes and actively participated in class discussions, he would finish at the top of his class since he could not afford the lecturers’ handouts.

Unfortunately, his assumption led to his failure in the mid-semester exams. Apparently, the questions were picked from the lecturer’s handouts, which contained specific answers that needed to be memorised.

Deviation from the expected answer was marked wrong, even if it was paraphrased. No provision was made for new ideas leading to the need for memorisation of handouts.

Osei further said that the lecturer often missed classes and referred them to read particular chapters in his handout. His attempt to impress the lecturer by reading current publications ahead of the class incurred his displeasure, which earned him the title “too known” from his classmates.

In such a situation, what qualities may be attributed to such a lecturer?

This article throws light on the corrupt behaviours of teachers and proposes remedies.

The corrupt teacher exhibits attributes that are contrary to the attributes of a good teacher. Such teachers depend on and sell obsolete notes to students as handouts to make extra money. Moreover, this makes the setting of exam questions and the development of marking schemes easier.

The teacher then uses the extra time available to engage in part-time money-making activities. Using handouts may be very detrimental to students’ learning as it encourages absenteeism because they already have notes on what is going to be taught.

It restricts students from exploring new knowledge as in the case of Osei who tried to explore but failed his exam in the process; promotes rote learning, and encourages students to emulate corrupt behaviours exhibited by their teachers. It stifl es creativity because students pay more attention to the obsolete handout rather than to research.

There are several Oseis in schools who want to be proactive by acquiring new knowledge but are inhibited from doing so because they are compelled to do what the masses are doing to pass their exams.

Other ways corrupt teachers operate are organising extra classes on which the fi nal exams are based and having illicit affairs with female students in exchange for high grades.

Most teachers make extra income by taking on part-time jobs in other institutions, which leads to work overload, thereby neglecting their main teaching jobs.

The assumption that any individual can teach so long as that person has an academic qualification in the subject area is farfetched.

On the contrary, a good, ethical and competent teacher has excellent tutoring skills and a positive attitude towards instructional practice while contributing to the development of well-equipped future leaders.

Teaching is typically more of a benevolent venture meant to shape society than a money-making venture. Francesca Jacobs Ret, in her attempt to address corrupt practices of teachers, proposed some qualities of a good teacher, which are interwoven with other virtues for the purpose of this article.

It is proposed that a good teacher has good communication and listening skills that build rapport and eventual trust between teacher and student. More so, a friendly attitude creates a student-teacher relationship characterised by the development of students’ self-confidence, leading to honest conversations and teachers’ guidance about students’ aspirations.

A teacher’s strong work ethic encourages emulation from students even when nobody is watching. The teacher’s ability to research current information before preparing lesson notes, organising class activities in a coherent way, and building on precepts that result in exciting class activities, leaves inspiring and memorable impressions on students.

Further, the ability to discipline students while maintaining love and respect between teacher and students is an attribute of a good teacher.

It is believed that helping students know as much about themselves as they know about the world around them, as well as managing both to thrive and equipping them with the relevant skills to excel wherever they find themselves, is what makes a teacher superior.

It is important to make courses rigorous and demanding, thereby piquing students’ curiosity, while merging theory and practice with the hope that students leave each class more excited and knowledgeable.

This is key rather than making them glued to the memorisation of handouts contents and extra classes, which often fatigues them.