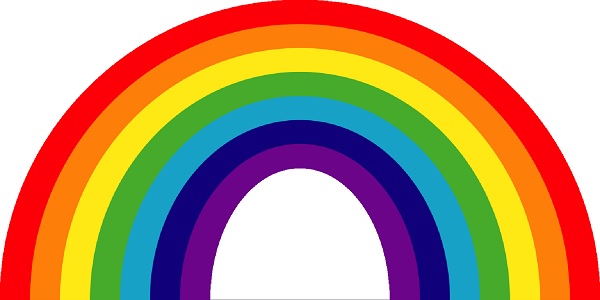 One of the fascinating spectacles of nature is the rainbow. From infancy, I have always been delighted by this beautiful spectrum of colours in the skies, especially on a clear day, against the blue backdrop of the sky.

Rainbows are formed when sunlight enters raindrops, causing dispersion and refraction of the light.

In other words, out of light (white) comes seven colours.

Remarkably, this natural phenomenon has a history, taking it beyond the merely physical realm into that of symbology, with associated meanings.

You would recall reading in the Bible that God destroyed the world with a deluge of water: the global flood.

Only Noah and his family survived the flood in an ark. Apparently, God was not altogether pleased with what He did, and He promised not to destroy the world by water again.

To remind him of the promise, He formed the rainbow in the sky, so that its appearance would put him on his guard against another deluge of water to destroy the world!

God says: “I set My rainbow in the cloud, and it shall be for a sign of the covenant between Me and the earth.

14. It shall be, when I bring a cloud over the earth, that the rainbow shall be seen in the cloud;

15. And I will remember My covenant which is between Me and you and every living creature of all flesh: the waters shall never again become a flood to destroy all flesh.” (Gen 9: 13-15)

The rainbow has seven primary colours. These are red, orange, yellow, green, blue, indigo and violet. These colours have meanings given to them.

When one observes that the rainbow has seven colours, one would then ask: Why seven?

From ancient times till date, seven is universally acknowledged as the number of perfection.

We have the six days of creation and rest on the seventh (Sabbath); also, we have seven days of the week and the seven planets.

Summarily, here are some references to seven in major religions of the world.

• Seven declarations of Jesus on the cross

• Seven spirits of God, seven churches and seven seals in the Book of Revelation

• Seven circumambulations of Muslim pilgrims around the Kaaba during the Hajj

Hinduism, Buddhism and the rest of religions all have their sevens.

Let’s get back to the rainbow for a deeper exploration of its meaning. There are three primary colours: red, yellow and blue.

By their combinations, several other colours are formed, known as secondary and tertiary colours.

For example, red and yellow produce orange; red and blue give violet; yellow and blue produce green. And these colours range into innumerable tints of colours with variants of mixtures.

Can anyone say which colour is “superior” and which is “inferior”?

As light (white) differentiated itself into seven distinct colours, so did God differentiate himself into different races from Noah, whose children were Shem, Ham and Japheth.

By these three, the whole world was populated. We have the major races as follows: White/Caucasian, Mongolian/Asian, Negroid/Black and Australoid. Whether this is arbitrary or not, let’s work with it.

It is reasonable to say that each of these races (with their subsets) have specific roles they perform towards global harmony and development, depending on their distinct qualities, just as the colours have their specific virtues.

Such understanding will necessarily preclude from our relationships the racism, discrimination, genocidal tendencies and oppressive and repressive governments working against other races of different political ideologies or religious persuasions.

Anti-Semitism, apartheid, slavery, extermination of Bushmen in Australia and native Indians in North America and South America, and current repressive action against Uighurs and other Muslims in the Chinese province of Xinjiang: all these are examples of man’s intolerance of racial and religious differences based on a mistaken and evil “superiority” complex of the dominating people.

For us in Ghana, no leader should ever make the tragic mistake of thinking his “tribe” or “people” are superior to “others”!

Such perverted thinking does influence political appointments and other subtle discrimination against others.

We have seen such things in our society, and the symbolism of the rainbow should teach us wisdom in how to handle our nation.

Beyond political intolerance and repressive conduct of governments, we also have religious intolerance of other faiths by, again, the dominant faiths.

Subsets of these religions are Bahai, Druze, Jainism, Gnosticism, Rastafarianism, Zoroastrianism, Shintoism and others.

The symbology of the rainbow comes across over and over again with respect to man’s spiritual aspirations and understanding of the world.

Each of these religions comprises social, political, religious and spiritual prescriptions that provide the multiple needs of its adherents and give them hope in life.

How could one government then outlaw another’s religion by persecuting its adherents?

Every nation owes itself the duty of working incessantly at creating a society of mutual respect for the various constituents of society.

Human rights that promote the dignity of man, tolerance of differences and oneness of the human family, as proceeding from one Creator-God, just as seven distinct colours are formed by the rainbow, are what will redeem us from the burgeoning bestiality that is overwhelmingly destroying the peace and security of humanity.

According to Marie Curie (distinguished Polish scientist), “Each of us must work for his own improvement, and at the same time share a general responsibility for all humanity.”

The rainbow symbolises the unity of diversity.

And the greatness of any nation is founded on mutuality of respect for the various races and tribes in the society; their varied professions; their distinct cultural identities and beauty of expression; their different values and strengths, and, above all, the synergy they produce to make the nation what it is.