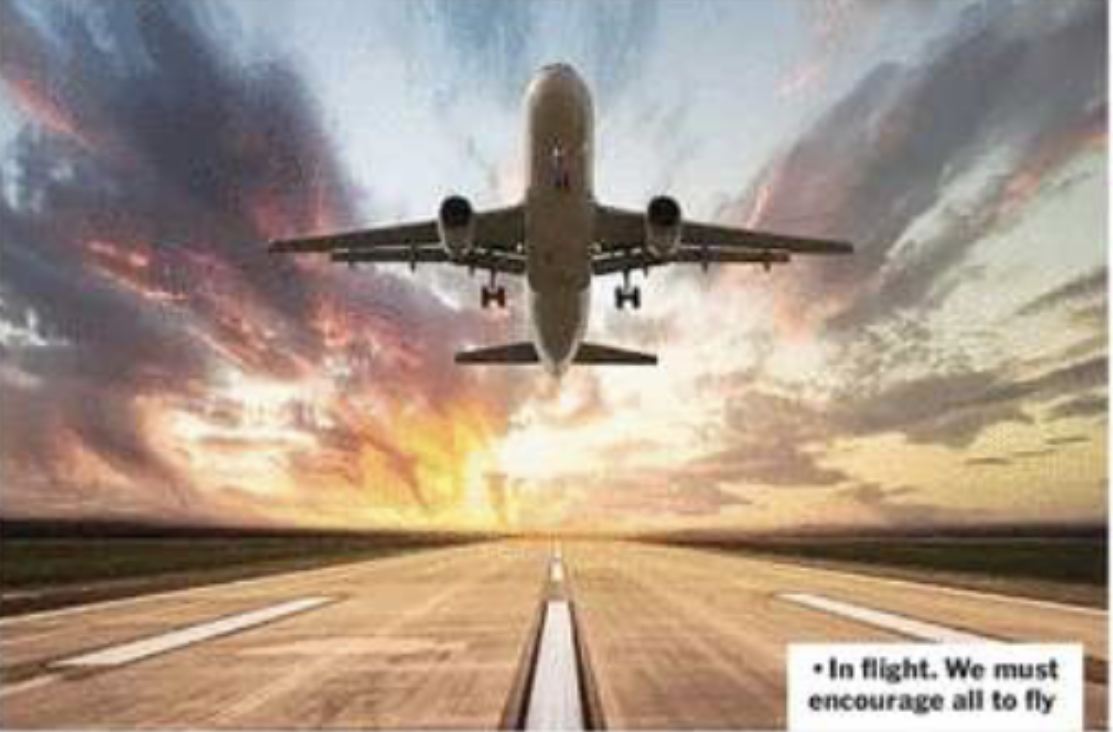 In flight. We must encourage all to fly Follow @Graphicgh

My recent flight from Accra to Kumasi on Friday for funerals took thirty minutes. On Saturday morning, driving a distance of 15 km from Kumasi to Mamponteng took one-and-half hours.

The return journey to Kumasi through a storm which disrupted the funeral took three hours as indiscipline and confusion reigned supreme on the single lane “face-me-I-face-you” road.

The 15-kilometer journey from Mamponteng to Juabenfor the second funeral using the “Ntonso-KasaamHighway” was very fast.

During the flight to Kumasi, my mind raced back to an incident at Bouake, Ivory Coast in 2006.

In 2006, Ghana became the first African country to provide an aviation unit for UN Peacekeeping Operations when a helicopter Squadron flew from Accra to Bouake, Ivory Coast. Soon after that, the Chief of Air Staff (Air Force Commander) and a delegation of senior officers flew to Bouake to visit the squadron.

On our second day at Bouake, a young pilot with his Ghana Air Force wing proudly on his chest came to me and after a smart salute asked if he could talk with me for a minute. “Sure, why not? I replied.

He started; “Sir, I have been trying to have a chat with you since your arrival yesterday, but it has been difficult.

He was right on the first count! I did not remember him. As for the second count of me making him a pilot, I thought it was a case of mistaken identity as I was an Army officer, and not an Air Force Officer. So, I asked, how did I make you a pilot?

He started, “Sir, you were the Commanding Officer, Ghana Military Academy (CO, GMA) at my first attempt at becoming an Army cadet, aspiring to be an engineer officer.”

The designation has subsequently been changed to “Commander, Ghana Military Academy.”

The pilot continued, “about 500 of us met you at the fourth stage of the Selection process which was the Outdoor Leaderless Test (OLT) which you conducted.  From the thousands who started, I was one of the 500 who had successfully gone through the Documentation Checks, Body Selection, Initial Medical Examination and Aptitude Test organized by the University of Ghana, Legon.

After the two-day OLT, we the candidates were anxious and apprehensive when it came to the results being announced. This was because we had been told only 25% would be selected for the final phase of the selection which was the interview with a Selection Board.

In a fatherly manner however, you defused all the tension and fear by telling us that, life is not always straightforward and that failure that day should not be seen as failure for life.

It could be God’s way of opening other doors and creating more options for those who would not be invited for the next phase. Those who would not hear their names for the next phase should therefore not go home downcast! Rather, they should leave with their chest out, happy that they gave it their best shot. Those who strongly wanted to join the military could try again the following year.

You concluded by telling us of your personal experience of a colleague of yours who failed at one stage of your cadet training overseas, but later in civilian life became a pilot. Like your mate, I failed the outdoor leaderless Test. However, I was so fired by your inspiration that, I swore to be a pilot. I, therefore, applied the following year this time as an Air Force cadet. By God’s grace, I was successful. So here am I today with the greatest pleasure of flying you as an Air Force pilot.”

With this, both of us struggled to keep our emotions under control as tears welled up in his eyes.

So, what story did I tell the candidates, which inspired my young friend to rise like a phoenix, from the ashes of failed Army engineer cadet to the cockpit of a successful Air Force pilot?

At the Military Academy, I trained in at the foothills of the Western Cordilleras in Chilliwack, British Columbia, Canada in the early 1970s, Bill was one of my mates. Bill was the oldest in my class because unlike us little boys, Bill entered as a university graduate. For some strange reason however, Bill had difficulty doing basic things like stripping and assembling a weapon. Rather than sympathise with him, we made him the target of our teasing. Unfortunately, Bill failed the course, dashing his hopes of becoming an Armour officer!

In 1986, I visited Robin who was a mate of Bill and mein Chilliwack, at the Command and Staff College, Toronto, Canada. Going through an old photo album of us in Chilliwack, Robin updated me on each one of our mates. When we got to Bill, I asked with anxiety, where is Bill and how is he?

Smiling, Robin’s calm answer was, “Dan, you won’t believe it, but Bill is a helicopter pilot for an offshore oil company!”

After a long silence, Robin and I went into a long philosophical discussion about life’s ups-and-downs and twists-and-turns! Bill could not become the Armour officer he aspired to be! But like Robin, he had become a pilot!

During my stay in Bouake, I was flown a few times by my young friend the Ghana Air Force pilot, who was inspired by the story of Bill to become a helicopter pilot. He is a “big boy” now and when we meet, he always refers to that inspirational address which galvanized him into positive thinking after failing his first attempt at becoming a military officer.

For the younger generation of Ghanaians, whatever difficulties you may go through, remember that nothing good comes easily in life. With a positive attitude, determination, honesty and integrity, one can rise from the ashes of defeat into the cockpit of a helicopter as the young officer demonstrated telling me,