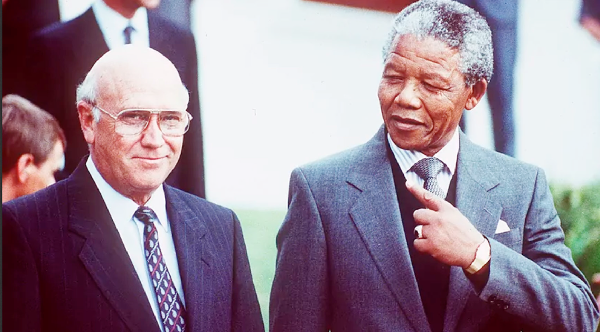 On November 14, 2021, news of the ransacking of a Catholic-Cardio-Hospital, Bamenda, North-West Cameroons, which serves Central Africa, by government troops looking for separatist fighters shocked many.

Blacks hunting fellow blacks to kill in a hospital?

This sordid demonstration of man’s-inhumanity-to-man took me back to Martin Meredith’s book The State of Africa in which he describes atrocities in Rwanda, DRC and South Africa, etc.

He was the last South African president under apartheid, and initiated reconciliation between blacks and whites.

A video of his death-wish states: “Let me tell you today, in this last message, repeat: I without qualification, apologise for the pain and the hurt, and the indignity, and the damage to Black, Brown, Indians in South Africa.”

Continuing, he said he changed his views on apartheid since the early- 1980s.

“It was as if I had a conversion and in my heart-of-hearts, I realised apartheid was wrong.

I realised that we have arrived at a place which was morally unjustifiable.”

Who was de Klerk and why did he talk of the “conversion” of Saul to Paul on the Damascus road?

Under apartheid, whites were considered a super-race, with all others as second-rate citizens at best, or at worst non-human.

Blacks were at the bottom of the social ladder, with no human rights!

Designated “Whites only” areas were out of bounds to blacks.

They could only go there to work as servants, with specially issued passes/ permits.

On February 2, 1990, de Klerk who had only been president for five months since August 1989, made a surprise announcement that Mandela would be released from jail.

Once he got Mandela out of jail, de Klerk started negotiating with him on democratic rule in South Africa to the chagrin of the whites.

It was the efforts of the two for elections in early 1994 that won Mandela and de Klerk the 1993 Nobel Peace Prize.

At his acceptance speech in Oslo, Norway, for the Nobel Prize, de Klerk stated that even though there were strong disagreements, they would move on “because there is no other road to peace and prosperity for the people of our country”.

At the swearing-in of Mandela as president of South Africa on May 10, 1994, de Klerk stated as follows: “Mr Mandela has walked a long road and now stands on top of a hill.

A man of destiny knows that, beyond the hill lies another and another.

The journey is never complete.

As he contemplates the next hill, I hold my hand to Mr Mandela in friendship and cooperation.”

If a white, de Kerk, and a black, Mandela, could put away their personal differences for the good of South Africa, through reconciliation with an apology from the perpetrator to the victim, why can’t blacks in any African country resolve issues by simply saying “I am sorry,” as de Klerk did.

In an earlier article, I stated that when whites humiliate blacks, we get offended.

But, if Cameroonian troops desecrate the sanctity of a major hospital, a Cardio-Hospital for Central Africa, looking for fellow Cameroonians to execute, what moral right do we have condemning racism against blacks?

In Ghana, the report of the Truthand- Reconciliation Commission in 2001 on the atrocities of June 1979 and post-31 December 1981 has not been made public.

Unlike de Klerk’s public apology which set the stage for reconciliation, averting possible civil war in South Africa, there has not been a public apology by the perpetrator/s to the families of the executed generals, murdered judges, molested market women, harassed businessmen who were called thieves simply for being successful.

Entrepreneurship was killed in Ghana.

We cannot continue pretending nothing happened, and continue rubbing it in!

We must confront our past for national reconciliation/ healing.

In 1649, when Colonel Oliver Cromwell executed King Charles 1 in his revolution, he did not apologise.

After his death, Cromwell’s body was exhumed in 1658, tried and executed.

He remains the most divisive ruler in British history!

Current accusations/counteraccusations of who did what for Ghana and who did not are unhealthy.

For, as Ralph Waldo Emerson said, “What you are, shouts so loudly in my ears that I cannot hear what you say about yourself!” Leadership, lead! Fellow Ghanaians, wake up.