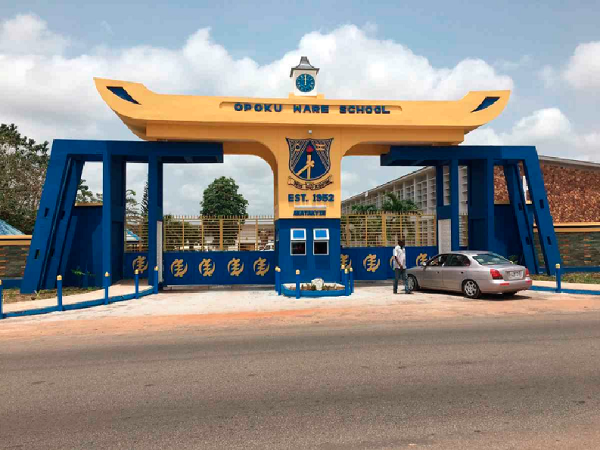 On October 24, 1980, I turned up with my mother as a nervous 12-year-old in my crisp white shirt and khaki trousers at the Opoku Ware School to begin my secondary education, my trunk and ‘chopbox’ in tow.

My father, an old boy of the school, had drummed it into me much earlier that he had long decided, even before he met my mother, that his first son would attend his school, so I had little choice in the matter.

As the school prepares to celebrate its 70th birthday next year, with a launch on Saturday to kick things off, I look back 41 years ago and my experiences over the next seven years and beyond.

I believe it was the best decisions my father made back in 1980, when it came to filling my secondary school choice forms.

Dear reader, please brace yourself over the next 12 months on these pages, because I will be waxing a tad lyrical about my school every now and then.

I can see, in my mind’s eye, our intense Kumasi rivals from Sofoline grimacing and hyperventilating over this notice, which of course gives me intense pleasure.

Up until the end of the Second World War in 1945, there was no government secondary school anywhere in Ashanti.

For Catholics in the region, this meant that those who sought Catholic education for their male children or wards had to send them down to Cape Coast to attend St. Augustine’s College.

This led to some agitation in the region for something to be done about the situation. His Lordship, Bishop Hubert Paulissen, the first bishop in charge of the newly created Diocese of Kumasi, tirelessly wrote several letters and held several consultations with the Gold Coast Director of Education, making a strong case for the need to have Catholic secondary schools in the region.

This agitation bore some fruit and culminated in a meeting on January 31, 1951 of some top officials of the Education Department.

It was decided to build for the church a Roman Catholic mission secondary school in Ashanti.

Much earlier, in the early-to-mid 1940s, Otumfuo Sir Osei Agyemang Prempeh II, the Asantehene, had impressed upon the colonial government, the need for a secondary school in the region, but that had not materialised.

The colonial government therefore approached the Catholic, Methodist and Presbyterian missionaries in the Kumasi and offered them a piece of land on which they (the missionaries) could build a secondary school and manage together.

The Catholic Church thanked the government for the kind offer but politely declined to be a part of the tripartite arrangement, on the grounds that the Church was not sure of the nature of the Christian component of the education to be provided to the young boys.

That view was based on differences in the philosophy of education between the Catholic Church and the two other churches.

It therefore declined to be part of this arrangement.

With the Catholics out of the picture, the Presbyterians and Methodists went on to establish Prempeh College in 1949 on the land given them by Nana Prempeh.

The Catholics continued to press for a separate land to build an institution that would provide a Catholic education, resulting in the January 1951 meeting.

Otumfuo Prempeh generously granted a parcel of land for the new school, which opened its doors on February 28, 1952.

We are, therefore, in quite good company when it comes to school birthdays.

Because of its name, many people do not realise that Opoku Ware is a Catholic school, and it is perhaps the only school whose name does not project an obviously Catholic identity.

But from the mother house (St. Paul) to the eleventh and newest kid on the block (St. Joseph), all our dormitories are named after Catholic saints.

Then, there is our numbering system. The pioneering class of 60 boys was given the batch number K, with the first to be admitted being allocated the school number K1, all the way to K60.

The following year the AB group took over and it ran all the way to AZ, and with the BC group entering in 2000.

The permutations are such that there are enough alphanumeric combinations to go round till Judgment Day.

A student’s school number is a key part of his identity during school and beyond, and gives a clue not only of his year of entry and completion but also his house.

Even if you are dismissed or you leave school prematurely, your number can never be allocated to another and you carry it to your grave.

Long before the idea of a national identity system was introduced in this country, our first headmaster, Rev. Fr. Burgess, had the foresight to introduce such a system in his school.

Saturday will see the launch of the year-long anniversary celebration at the school’s Burgess Hall under the theme ‘Seven Decades of Leadership through Self-Discipline: The Opoku Ware School Story’.

Kat. Most Rev Gabriel Anokye,(AF354), the Catholic Archbishop of the Kumasi Archdiocese, will be in attendance as Special Guest of Honour.

It is going to be real fun, with the school’s cadet corps, cultural troupe and regimental band showing off their skills.

Activities in the course of the year will include a public lecture, community outreach programmes, sporting events, gospel shows, a homecoming event, a grand durbar and a 70th anniversary ball, among others.

This Saturday, all roads lead to Santase in Kumasi and nowhere else.

Rodney Nkrumah-Boateng E-mail: This email address is being protected from spambots. You need JavaScript enabled to view it.