One birthday, one funeral, one weekend 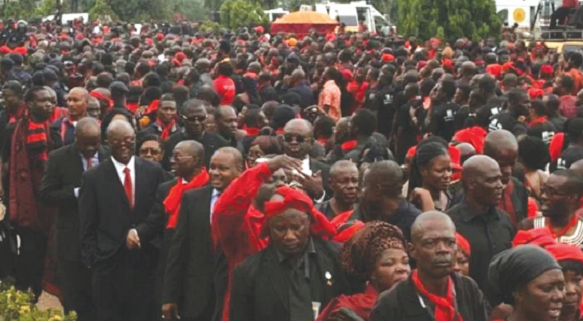 Funerals in Ghana are elaborate

Last week, in my article on akpeteshie, I inadvertently stated that the packaged drink in the accompanying photograph was produced by GIHOC.

Over the weekend, I had to deal with two separate but interwoven social issues.

You see, it was my birthday on Friday and most of my day was spent in deep reflection as I recalled the years gone by – the good, the bad and the downright ugly.

Of course in all of this, I am grateful to the Lord - Ebenezer! See how far the Lord has brought us.

In the evening, it was time to let one’s hair down a little, gather some family and friends and break bread, to be washed down with all manner of liquids before hitting the night life on the streets.

It was a long night. It was a Kumasi affair.

To a certain extent, the Kumasi angle of the celebrations was not entirely voluntary.

I have had my past few birthdays there and my friends and work colleagues in Accra have been complaining about my bias, claiming that Accra is where it all happens.

“Accra is Ghana and Ghana is Accra”, they boast. I usually would roll my eyes.

But then earlier this year, I decided I would quieten my Accra gang with a small but intimate barbeque in the yard of my humble abode, where we can get some meats sizzling on a hot grill and some drinks overflowing glasses, cups and calabashes.

My Kumasi celebrations were occasioned by the fact that it was the same weekend the funeral of one of my maternal grandmothers was being held.

If I had any say in the matter, the funeral would have been held on another Saturday.

But in the ‘abusua’ scheme of things, my lips were sealed as I have no ranking because I am a ‘small boy’, so to speak, meaning I could only throw up my hands in quiet impotence when my mother announced the date to me.

The funeral was to be held in Ashtown, where I live whenever I am in Kumasi.

I could not possibly turn up in Kumasi on Saturday morning or even on Friday night.

And so it came to pass that on my birthday, I had to dress in black in honour of my grandmother who had passed at the grand age of 98 and mourn her passing whilst I celebrated my birth.

Luckily, because she had died at such a ripe age, the mourning part was also in effect a celebration of her life, which meant of course that in a way, I was celebrating twice, albeit for different purposes.

One of the redeeming qualities of beer or indeed wine or any other drink with some alcohol, is its versatility – one can drink it in sorrow or in celebration.

But then, I could not have my birthday celebration at home whilst the undertaker was working his skills on her body or other family members were gathered in a sombre mood, which meant relocating the entire affair to a coded location, still dressed in black.

As I savoured both the moment and aftermath of my birthday celebrations and prayed to God to live beyond 100 years (for what, exactly?), my mind could not help but wander around the whole business of Asante funerals as events unfolded before me in the runup to the funeral - heated arguments and disagreements at family meetings, petty quarrels here and there, tight deadlines to be met ensuing in mad rushes, meticulous checklists on what could have been overlooked and phone calls to various service providers, including caterers, rental companies, an undertaker, kete groups and others to ensure they were on point and on standby to deliver that crucial service.

Everyone had a role to play and the CEO of the family, the abusuapanyin, kept everyone on a tight leash to ensure deliverables were met within the relevant timelines.

For a woman of such advanced age who had led a fruitful and productive life, it was important for my grandmother to be sent off properly.

There were standards to meet. We could not slip. The undertaker, for instance, had to be topnotch and the best that money could get because grandma had to look fabulous as she lay in state.

In the end, she did after he had performed his magic on her as he did with my father six years ago and the old girl got quite a lot of compliments, which of course she did not hear.

Asantes place great emphasis on their funerals and do take steps to ensure it is elaborate.

A person who is used to Accra funerals and attends a Kumasi funeral is likely to find the whole experience rather overbearing, in the same way as a Kumasi man like me finds Accra funerals rather sterile and abrupt. But then to each, their own, I suppose.

It has been a long weekend celebrating life and death.

May many birthdays come in my life until I am tired of life itself, as my late paternal grandmother used to complain whenever I visited here in her old age.

She would explain that all her classmates were gone, that she had already acquired her visa to go and was just waiting for her plane to land and carry her away.

As for the funerals, may they be very few and very far between in my family and yours.

If God grants me life, I want to be nowhere near a funeral next year on my birthday.

Instead, I hope to spend it on a sun-kissed Caribbean island, sprawled lazily and topless on a sandy beach sipping exotic cocktails and watching the waves crash gently on the shores without a mobile phone, a laptop or any other modern contraption in sight.

Just nature all around me. Pure bliss.

Looking at my bank account balance, this is a rather bold hope, but I serve a miracle-working God.

Now let me dig my rusty ‘susu’ box from under my creaky bed….