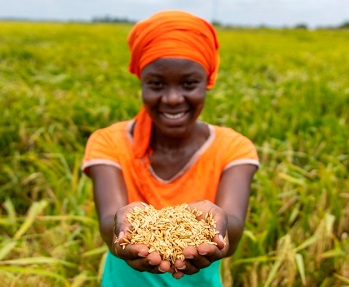 A farmer on a rice farm in the Volta Region. Follow @Graphicgh

Although Rice has long been an important food staple in Ghana, its availability and consumption have depended heavily on imports over the years, mostly from countries like Vietnam, Thailand, India and the USA.

Rice importation in Ghana rose sharply from it Gh¢151 million to Gh¢1.2 billion between 2007 and 2015, according to the Oxford Business Group, whose report discloses that by 2015, as much as 66 per cent of rice consumed in the country was imported.

This situation is ostensibly caused by the continuous increase in the demand for rice by a rapidly growing population – demand and consumption levels which far outstrip the local production capacity. In 2017 for instance, Ghana was recorded to have produced 721,610 tons of paddy, when consumption stood at about 1.3 million tons, creating a huge deficit of 580,300 tons. The Ministry of Food and Agriculture (MoFA) suggests that the rice deficit has been growing since 2011 despite a 27 per cent increase in domestic production registered between 2013 and 2017.

But besides concerns over the sharp shortfall between demand and domestic production, another problem inhibiting the growth of the local rice sector is the issue of what appears to be a general preference for imported rice by the average Ghanaian consumer.

In recognition of the full implications of this problem, the Minister of Food and Agriculture acknowledges that the country’s overreliance on imported rice is unsustainable and necessitates the need to boost local production to meet growing demand.

The government’s flagship agricultural policy – Planting for Food and Jobs - as of 2017, had provided some 1,699 tons of seeds to farmers at a subsidised rate of 50 per cent and increased seed distribution by 39 per cent. The PFJ programme has also increased access to and developed the necessary channel for the effective and transparent distribution of fertilisers to farmers; it has also increased the land size in strategic regions to foster production in large quantities.

These initiatives seem to be paying off, as Knoema reports, that paddy rice production hit 973,000 tons in 2020 and is projected to increase by five per cent in 2021/22 according to the Global Agricultural Information Network (GAIN). However, overall consumption in Ghana is also projected to shoot up by 1.58 million tons, due to the steady rise in the population, urbanisation, and the rapidly growing middle class.

As indicated earlier, consumer preferences have for many years favoured imported rice varieties. Hagan and Awunvo-Vito contend that whereas preferences may be influenced by educational level, household size, gender, availability and pricing, factors like the quality of grains, packaging, taste and availability are key influencers of preference.

In recent times, there appears to be some adjustment in consumer perception. Researchers agree with the assertion that the market is witnessing a subtle growth in the demand for locally produced rice; and that a section of the consumer public has discovered, either through the media or some other means, that locally produced rice has greater nutritional value than imported ones; while some consumers have simply bought into the general idea of consuming locally made products to boost the local economy.

This, however, does not negate the fact that effective packaging and marketing, easy access made available through well-structured local distribution channels, and most importantly, competitive pricing combine to make imported rice much more attractive to consumers.

To correct this trend, therefore, considerable investments must be made, not only to drive production downstream but also to focus on the entire value chain to generate a well-harvested and packaged league of rice brands that are effectively distributed and marketed at a competitive rate through effective pricing and tactical promotion. This is an extensive campaign which cannot be left on the shoulders of the Government alone and therefore requires strategic partners and investors, willing and ready to commit to improving the value chain through sustainable operations. This is where accomplished food chain institutions and managers like Olam Agri come in.

With over 25 years of operational excellence in the agriculture and packaged food industry, Olam Agri in Ghana has grown to become one of the leading companies within the national agri-space with a focus on the entire value chain - from the farmer through to the end consumer.

With over two decades of rice production, processing, packaging, marketing, and distribution in Asia and Africa, Olam Agri’s rice business has developed expertise in the sustainable growth and development of rice for large-scale consumption and currently ranks number two globally, contributing close to one million metric tons of rice onto the global market. In Africa, the company is rated the second-largest rice trading business with a significant presence in over 14 countries within the sub-regions. 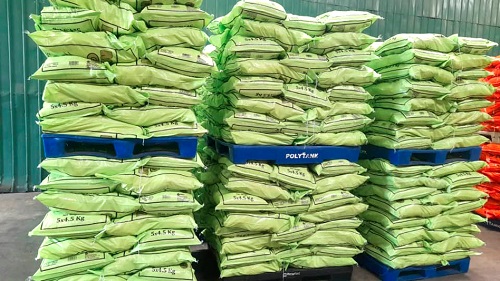 Stacks of Mama Gold Rice in an Olam Agri Warehouse

Olam Agri has contributed to food security and sustainable growth in Nigeria by investing over 20 billion Naira in various portfolios in the rice sector and is currently operating over 10,000 hectares of farmland in Nasarawa State, with over 500 km of road network, making it one of the largest farms in Africa.

In its quest to localise operations and contribute to the sustainability of rice production in the country as well as increase food security, Olam Agri’s rice business in Ghana has collaborated with local millers, aggregators, and other strategic partners who can produce and stock rice according to conventional market specifications. The business provides the necessary infrastructure and funding to ensure downstream support to increase local production.

The company also collaborates and supports local farmers and out-growers by providing the requisite training to ensure that farmers produce quality yields to complement the produce. In Nigeria for instance, Olam Agri has established an ultra-modern milling facility that is targeted at increasing overall production.

This significant contribution has helped increase domestic production while supporting economic and agricultural development opportunities for local rice farmers. In Ghana, Olam Agri’s rice business has packaging facilities in major parts of the country and maintains warehouses across all 16 regions, making it one of the largest rice businesses within the country with popular brands like Royal Feast, and Royal Aroma being the market leads.

The company also has the requisite funding necessary to promote local produce through effective advertising to make home-grown rice more competitive when pitched on the market with other brands, as is evident in its operations in Nigeria, Cameroon, and now Ghana.

Olam Agri’s operational infrastructure, strewn between the farm gate and the marketplace, is an asset not only for stimulating production but also for promoting the consumption of local rice. The availability of well-equipped warehouses and laboratories stationed at vantage points across the country makes it possible for Olam Agri to store high volumes of rice under healthy conditions during the peak season to guarantee an uninterrupted supply all year.

All things being equal, the future of domestic rice production looks promising, especially with the renewed interest and commitment by the government.

Olam Agri in Ghana, as part of its commitment to transform food, feed, and fibre for a more sustainable future means, is poised to provide the necessary support to help develop local rice production by complementing the government’s effort within the agri-space.

There is no doubt that stakeholder collaboration is critical for uplifting the domestic rice production agenda. Such collaboration will help accelerate the development of rice production, promote employment within the agriculture sector, and assist in the production and effective distribution of quality rice to meet local appetite and demand as well as international standards.

It is this vision, driven by functional and effective partnerships within the domestic rice production space, which evolved into the birth of Olam Agri’s maiden and one of Ghana’s most popular local rice brands, ‘Mama Gold’.