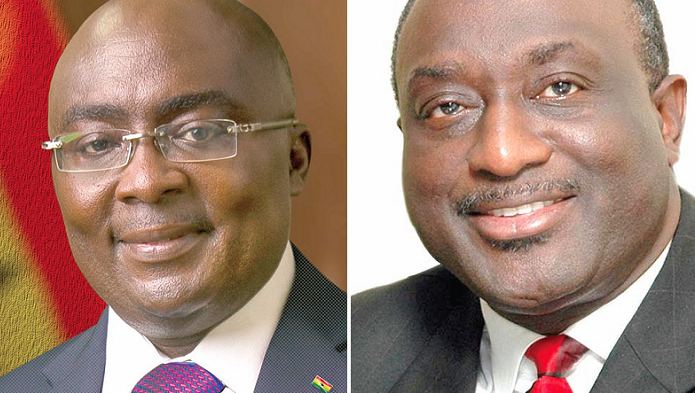 If anybody had lingering doubts about the full line-up for NPP’s next flag bearer race, all the doubts were cleared on October 7, this year.

In a move unprecedented in Ghana politics since 1996, it was the office of the Vice-President that announced the candidacy of a sitting Vice-President in a presidential race.

The announcement was in the form of a text message congratulating Alhaji Dr. Mahammadu Bawumia on his 58th birthday anniversary.

The message made no attempt to pretend that it was a mere a birthday wish; it was an “official” announcement with innuendoes announcing the Veep’s next station in life as the “soon-coming king”.

In obedience to an Akufo-Addo fiat that no appointee of his should announce their presidential ambitions ahead of the lifting of his ban, Bawumia has wisely been mum on his intentions. But with the unambiguous text message sent to the radio station, he has practically fired the first shot.

There is silence in the camp of Allen Kyeremateng, the man thought to be the highest contender in any Akufo Addo succession race, but people say he is waiting to see the President’s flag go down.

To all intents and purposes, therefore, the battle lines are drawn. Besides these two contenders are names including those of ex-Railway Minister, Joe Ghartey and Agric Minister, Afriyie Akoto.

The list may be as long as in 2008 but the end story will not change from what is known today: Bawumia and Allan are the frontrunners.

Although in the 2010 primaries, only 2,226 votes were counted for Allan, representing 19 per cent, the circumstances were different from the 2008 contest where 32.30 per cent of delegates voted for him, against Akufo Addo’s 47.97 per cent: in 2008, there was a sitting Vice-President, Aliu Mahama, in the race, though a disappointing 6.39 per cent of votes were cast for him.

But Mahammadu Bawumia is a Vice-President of a kind, totally unlike Aliu. In the Fourth Republic, he is the most actively involved Vice-President in terms of policy initiatives whereas the noisiest policy associated with Aliu was the Campaign against Indiscipline, which failed.

Indubitably, Allan has been NPP’s second favourite since 2008. But that was before Bawumia entered the scene.

Whilst every Vice-President has been the chairman of the Economic Planning Team in all governments of the Fourth Republic, Bawumia has been the economy itself since 2016, the “chief promiser” in the 2016 campaign.

His influence is felt at the ports, DVLA and other sectors where they call him “Mr. Paperless”.

Allan comes with equally impeccable credentials. Like Akufo Addo, he is an Economics Major and Barrister at Law.

Over 4,000 African entrepreneurs and small businesses benefited from those programmes.

He transformed the EMPRETEC Foundation of which he was CEO into a world-class institution recognised as a successful model and best practice institution for enterprise development in Africa.

As minister in both the Kufuor and Akufo Addo governments, he is the private sector man.

It is not known along which lines the delegates will vote at the NPP’s next congress but without doubt they are going to take a hard look at the 2020 election results.

The message from that poll is that without Ashanti, the NDC’s John Mahama would be the President today. Will they want to reward Ashanti and ,therefore, go for Allan?

The permutations are, however, not going to be this straightforward. A latter day NPP convert, Allotey Jacobs, has hinted of Mathew Opoku Prempeh as Bawumia’s running mate. ‘Napo’ (his other name) is a Manhyia royal and will, therefore, expect Ashanti backing.

Religion has not been a prominent factor in Ghanaian elections. Will the NPP’s 2023 delegates do the unthinkable by voting on religious lines?

That will be dangerous, like playing the tribal card on the assumption that the northern populations are not sizeable.

What people overlook is that northerners, as a people group, are not resident only in the five northern regions. In areas such as New Edubiase, Madina, Ashaiman and Asawase, the northern populations tilt the votes in favour of the NDC all the time.

If the NPP dismisses Bawumia on grounds of both tribe and religion, the backlash will be the party’s undoing, perhaps for a very long time to come. Communicating the message is key.

The fact, however, remains that so far, going by polls results over the years, Bawumia will be no match for Mahama among northerners.

In the “Zongo” areas and in the north itself, supposed to be Bawumia’s stronghold, the NPP fared badly in 2020.