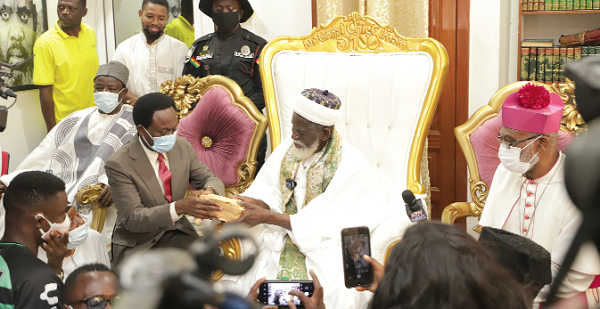 The donation of GH¢50,000 by the National Chief Imam, as his contribution towards the construction of the National Cathedral, has stirred much controversy among Muslims in Ghana and beyond.

News accompanying the gesture pointed to it being intended to strengthen the solidarity and goodwill between Muslims and Christians, as well as foster inter-faith harmony.

The stated objectives are good but the gesture is questionable on a number of grounds and these exclude those enjoined by the Islamic faith.

Many of the opinions of those raising questions about the Chief Imam’s gesture are secular in nature and are summarised as follows.

First, that there are more pressing challenges facing the Chief Imam’s immediate constituency that need urgent intervention. Zongos in Ghana, for example, are a concentrated expression of the myriad of problems facing the country in terms of poverty and underdevelopment in their worst manifestations.

These challenges are so serious that a separate ministry, the Ministry of Zongo and Inner City Development, was created to concentrate its attention on addressing them.

A flagship initiative was the Zongo Development Fund of the now defunct ministry.

The Chief Imam’s action, some argue, is the equivalent of a father leaving his starving children at home and going out to make a lavish contribution towards a royal banquet.

This is not what Prophet Muhammad and Prophet Jesus (peace be upon them) would have approved of.

Second, to achieve the Chief Imam’s stated objective of fostering inter-faith harmony, he necessarily has to carry the Muslim community with him.

Unfortunately, what he has done has the potential of a boomerang effect, the consequence of which will be that the constituency the Chief Imam represents, will be alienated.

So far, there is no evidence that the approach the Chief Imam has chosen, to reach out to our Christian brethren, has popular support in the Muslim community.

On the contrary, there is a feeling of utter disbelief among the Muslim clergy and the Muslim masses as well.

Third, the National Cathedral is a political project, conceived by a high-profile political personality in fulfilment of a promise he made to God in an earlier bargain.

With the country so acrimoniously divided along partisan political lines, the Chief Imam should have been advised to tread more cautiously.

Whether he likes it or not, he has now been painted with a partisan political brush.

Therefore, the gesture was ill-conceived and it is doubtful if it will have any meaningful impact on the much-desired and cherished inter-faith harmony.

One thing is sure. It has added an unfortunate dimension to Ghana’s raging partisan political acrimony into which the Chief Imam has now dragged himself into and by extension the entirety of the Ghanaian Muslim community.

I am sure this is not what he had wished for and could easily have been avoided.

The writer is with the Islamic University College