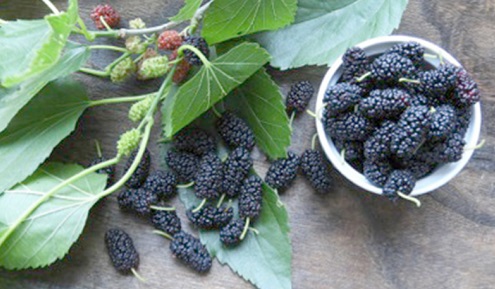 Mulberry has an interesting history. For instance, in the story of Pyramus and Thisbe, two next-door neighbours turned lovers, were forbidden from getting married because of their parents’ rivalry.

However, they arrange to meet under a mulberry tree.

But due to a misunderstanding, Pyramus believes Thisbe was killed by a lion and ends up stabbing himself, Romeo and Juliet style, with his red blood staining the white mulberries.

In fact, in the 17th Century, King James I imported 100,000 mulberry trees from all over Europe in hopes of increasing silk production in Great Britain.

However, his project failed when he accidentally ordered black mulberries instead of the white mulberries that produce the leaves eaten by silkworms.

Due to their extraordinary antioxidants, one study by Sakagami et al., (2007) found that mulberry juice was able to effectively reduce levels of oxidative damage caused by free radicals in mice.

Another retrospective similar animal study by Sakagami et al. (2006) found that mulberry juice acted as an antioxidant and reduced stress caused by these cancer-causing free radicals.

Fast-forward, a study by Cho et al. (2017), isolated a specific compound from mulberries and found that it was able to induce cell death in breast cancer cells and slow the growth and spread of tumor cells in mice.

One retrospective study by Stephen and Cummings (1980) found that one cup of mulberries can add 10 per cent of daily fiber needs.

The study notes that fiber adds bulk to stool and enhances satiety, keeping you feeling fuller for longer to reduce appetite.

A prospective study by Peng et al. (2011) agrees that mulberries could have an anti-obesity effect.

The study demonstrates that treating hamsters with mulberry water extract for 12 weeks lowered both body weight and visceral fat.

Ruggeri(2019) agrees that the fiber found in mulberries is mostly insoluble fiber, “but it also contains about 25 percent soluble fiber in the form of pectin”.

Additionally, a study by Imran et al.(2010) found that soluble fiber can absorb water and help reduce cholesterol levels and decrease the risk of heart disease.

One retrospective study by Liu et al. (2008) demonstrates the weight loss effect of mulberry. This is done by engineering the compounds in mulberry to avert the oxidation of LDL cholesterol, one of the major risk factors of heart disease.

In this animal study, mulberry water extract helped decrease levels of both triglycerides and cholesterol.

Some studies agree that Mulberries may be, especially effective in the prevention of fatty liver disease.

For instance, Chang et al. (2013) study which involves a test-tube found that the compounds in mulberries helped block fat formation, prevented fat accumulation and also promoted the clearance of fat out of the liver.

One study by Wang et al. (2013) in PLoS One agrees that mulberry extract was able to significantly lower blood sugar levels in diabetic mice.

A similar study by Stefănuţ et al. (2013), where diabetic rats were given mulberry extract for five weeks and their blood sugar was measured after.

The study found that the diabetic rats blood sugar dropped from 252 mg/dL to 155 mg/dL.

Although minimal, there are some allergic reactions. For instance, one study by Choi et al. (2015) found reactions in those who are sensitive to birch pollen due to cross-reactivity.

This means that one must discontinue use if he or she experiences any mulberry fruit side effects.

This notwithstanding, for most people without sensitivities, mulberries can be a nutritious addition to the diet and can come with many benefits to health. Moderation is always the key thing to do (Links, 2019).

In conclusion, studies demonstrate that mulberry fruits avert cancer, reduce cholesterol and blood sugar levels, aid in weight loss and protect the health of your liver.

The writer is President, Nyarkotey College of Holistic Medicine & Technology (NUCHMT)/African Naturopathic Foundation. E-mail: This email address is being protected from spambots. You need JavaScript enabled to view it.