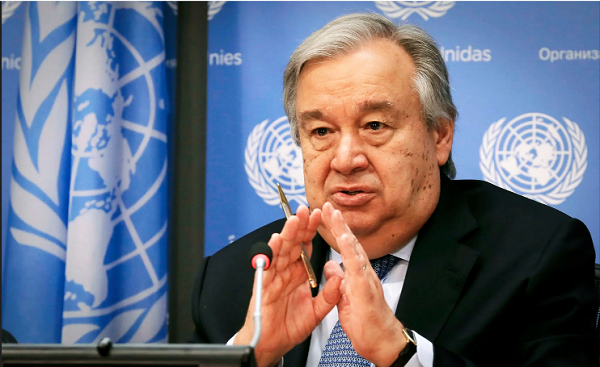 The United Nations is very concerned about climate change, and its effect on the global economy, and also disturbed about the COVID-19 pandemic.

The UN is committing financial resources and human expertise to abate the harmful effects of these two evils.

Whereas it is a fact that natural disasters have broken out in several countries as a result of the much touted climate change, there is also another angle from which to see the natural disasters: moral evil.

The inevitable consequences of the rapid technological and material transformations taking place on earth have created a backlash of reversals in the pattern of natural processes.

Climatologists and environmental scientists have listed those factors that impinge on the climate and on nature.

These are some of them:

• Temperatures are rising worldwide due to greenhouse gases trapping more heat in the atmosphere.

• Droughts are becoming longer and more extreme around the world.

• As temperatures rise there is less snowpack in mountain ranges and polar areas and the snow melts faster.

• Overall, glaciers are melting at a faster rate.

• Sea ice in the Arctic Ocean around the North Pole is melting faster with the warmer temperatures.

• Permafrost is melting, releasing methane, a powerful greenhouse gas, into the atmosphere.

And, true to facts, we have had daunting wild fires in Siberia, France, Greece, Israel, California, Australia, Morocco, Algeria, Turkey and others.

Severe flooding took place in Germany, North Korea, China, and Turkey, while disastrous hurricanes hit India and South Eastern coastal states of the US, with massive destruction of property and power lines.

Most countries are grappling with natural distortions within their environment, of which some are volcanoes in Congo and in Spain.

On top of these disasters, we have the global killer as well: COVID-19!

Our expectations are that once we succeed in enacting stringent laws that control waste, deforestation, carbon emissions, and so on, we would rein in the destruction of the environment and reduce the attrition of the climate.

Certainly, all such interventions would be most welcome, and we must pursue them rigorously.

However, from another perspective, the bizarre climatic conditions and the natural disasters accompanying them could be the effects of moral and spiritual evil against man and God.

In other words, the harmony that should exist between man and nature is a harmony based on man’s obedience to the laws established by God for the governance of the universe.

Please refer to the quotes above.

When we turn to the Bible, which some people scorn, we see how fundamental God’s interest in man is, and how grievous it is when we disobey Him.

In His anger, he uses nature to punish us! Let’s look summarily at some of the wrongs taking place on a colossal scale on earth, then we can appreciate the consequences for ourselves.

Human rights abuses: To turn aside the justice due a man/ Before the face of the Most High /Or subvert a man in his cause-/The Lord does not approve (Lamentations 3:35-36 NKJV).

Homosexuality: In the same way the men also abandoned natural relations with women and were inflamed with lust for one another.

Men committed indecent acts with other men, and received in themselves the due penalty for their perversion. (Rom 1:27 NIV)

Corrupt governments: Your princes are rebellious/And companions of thieves/Everyone loves bribes/And follows after rewards. (Is 1:23 NKJV).

Assassinations, murders and bloodshed: The iniquity of the house of Israel and Judah is exceedingly great, and the land is full of bloodshed, and the city full of perversity; for they say, “The Lord has forsaken the land, and the Lord does not see”. (Ezekiel 9:9 NKJV)

There are far more passages one could quote than space would allow.

These few examples testify to how the pervasive and global corruption, disobedience to God’s laws, man’s immorality, and arrogance, invite divine retribution against humanity, and thereby upset the ecological balance on earth.

In effect, beyond whatever material decisions we take to minimise climatic disorders and ecological imbalances, the nations of the world would have to think about their relationship with God, and begin to redress wrongs of governance, and to uphold personal probity in business and in human relations.

The great nations would also have to think about the support they give to adversarial political forces within a country, and their interference thereof.

The wars in Yemen, Syria, Iraq, Libya, and murderous attacks on civilians by the ISIS, Boko Haram, and Jihadists, produce massive bloodshed and incalculable suffering.

The effects of these evils are that the natural forces of life are distorted, and the disasters that follow are the unavoidable results.

The United Nations and other intellectuals may scorn the idea of divine intervention to right wrongs, but whether the United Nations downplay God or not, their attitude won’t change the natural and spiritual order of things. What is wrong is wrong, and cannot be rationalised.

The United Nations should consider the moral and spiritual consequences of man’s actions as well, and persuade governments to improve governance and avoid interference in the affairs of other nations.

When these considerations are in play, in addition to the scientific solutions being sought for the climatic disasters, I am confident there would be immense desirable changes for the benefit of humanity.