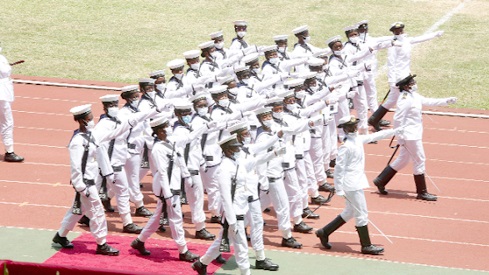 When, with a thunderous ovation, we shot our hands into the air, and with joy exclaimed Freedom! Freedom! Independence! Singing, dancing, and reeling with joy, what did independence and freedom mean to us?

In our 65th year of independence, we are riding the choppy seas of nationhood, our compass awry, uncertain of our destination.

In our 65th year of independence, we are like travellers wandering on the desert, painfully and vainly moving from one mirage to the other.

In our 65th year of independence, a desperate hunger for bread, shelter, work and money claws at our stomach.

In our 65th year of independence, we are full of questions: wondering which government would provide the leadership to transform Ghana, and wondering how we shall attain our vision, plans and aspirations.

In this article, we shall look at what impact our attitudes have made on the nation, since independence.

On analysing Nkrumah’s statement, we shall observe two salient conditions fundamental to the assurance of independence.

The first is change of mind; the second is hard work. These two conditions are inseparable: hard work depends on the attitudes and mind of the Ghanaian; and the attitudes affect our relationship with the nation.

Ghana’s independence merely delivered us from the political control of the British. It was a specie of freedom; not the full freedom, for, indeed, freedoms are of kinds.

It did not mean we were completely free! True freedom is psychological. It is here that the greatest struggle lies.
Independence led to the transfer of allegiance from a foreign power to our national government.

What confronted Nkrumah then was how Ghanaians were to adapt to the new phenomenon of a Ghanaian government.

Nkrumah remarked on this and said: “One subject which should occupy our attention during these discussions is the subject of the Ghanaian attitude to state property. Under the colonial regime, the people were made to feel so remote from the government and so divorced from it that they grew up with the idea that the government and the people were two different entities. In those days, government property was treated with deliberate negligence. Unhappily, this attitude has, to a great extent, remained, and it is causing a good deal of harm to our society today.” - Nkrumah, at Winneba Ideological School, February 3, 1962.

Here we have a succinct picture of the first major attitudinal change which is a prerequisite for national development: we must see government as our own creation, from which we derive our sustenance, and to which we give our energies and pledge our fealty.

A cursory look at our environment bespeaks negligence, waste, and compromise of national assets and, even, our own things.

These elements are outward reflection of our inner state of mind.

Attitude should then be understood to mean our outlook on things; how we see things, and the interpretation we put on matters. And our attitudes flow from our personal values.

If we are not careful in taking good care of national assets, to wit: vehicles, bungalows, electronic gadgets, hospitals, schools, monies and so on, it means we still see government as an entity that is not part of us, and to whom we could do whatever we fancy, without accounting for our actions.

The Public Accounts Committee (PAC) reports of huge financial misappropriations and property misuse, among others, are examples of negative mindsets inconsistent with nation building, or national development.

Distance
It is remarkable that, whereas we pride ourselves in our parliamentary democracy, this has turned out to distance us from the idea of government, because of the partisan nature of such democracy.

Put differently, when one party is in government, the rest who do not belong to the party in government distance themselves from it, and wish to see it fail, for the other party to campaign on its failures, as a means of getting into power at elections.

In other words, Nkrumah’s diagnosis of the panacea to our development is far from realisation; we still see government as the “other entity” that we don’t belong to!

And, to exacerbate such psychological alienation, the government in power tends to neglect or abandon whatever projects or even policies that have been initiated for the good of the country, by the previous government.

Independence and freedom imply responsibility. And responsibility is hard work. That was what Nkrumah stressed. Hard work is not just an enormous expenditure of energy and resources.

Hard work entails vision, organisation, planning and management. Overlaying all these is integrity.

Whereas Nkrumah knew what he wanted for Ghana, and planned for them, and we began to see the beginnings of a beautiful dream, his premature exit from office doomed the development of this nation, as no one else had his drive and vision to realise what he fought for so much.

As we celebrate our 65th birthday, we must remind ourselves Ghana needs a master development plan which the ordinary citizens have bought into, and made integral to their life. We have heard of a 40-year plan of the National Development Commission. How does it concern the ordinary person at Makola or Nima?

Do we even know the contents? Each Ghanaian should by now have had certain knowledge of the direction in which the nation is going, and what is expected of us.

Such knowledge would impact our attitudes towards our governments and the nation.

Myles Munroe, known as a great inspirational speaker and author, wrote in his book:

The Burden of Freedom: “National independence does not guarantee freedom; it only proffers deliverance from imperialism. The spirit of industry, work and responsibility determines the success and development of a nation.”