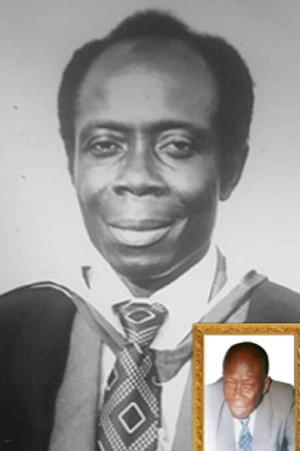 What a difference a personality can make! Mr Dontwi — like the earlier housemaster and then headmaster of Mfantsipim, Mr O.K. Monney — was one of the coolest and patient teachers ever.

We remember him way back in the mid-1960s for a chemistry class he taught us in Form 3.

He had just arrived from University of Ghana, I think; and we happened to be his guinea pigs at the start of his long trajectory as an educator.

Some of the naughty boys used to taunt him. Those were the days of wet science labs with bunsen burners, beakers, funnels, spatulas, measuring cylinders, glass tubes, etc. At one time, we had finally succeeded in an experiment that produced hydrogen sulphide (H2S), whose peculiar charm was the smell of a rotten egg.

Somehow, we found the odour mind-blowing, so in our naivete – and for the fun of it - we’d quietly adjust a knob in the apparatus to release the smelly gas.

When the smell finally reached Mr Dontwi, he stopped in his tracks with a warning of the hazardous kind.


He cautioned about the danger of inhaling H2S, which, when mixed with the watery fluids in the lungs, could create the sulphuric acid to corrode the lung tissues.

Mr Benjamin Kwame Dontwi started teaching at Mfantsipim in September 1963. He retired as the Headmaster on 31st August 1997, spanning a period of 34 years. He was appointed Acting Headmaster in 1980 and later confirmed Headmaster. He served in this position for 17 years, thus, being the longest serving teacher and Headmaster of Mfantsipim.

His first students were in Form 3 in 1963, the present Class of MOBA ‘66. He taught Biology and Chemistry and was also a Form Master to Form 3B. It was during the Chemistry lessons on acids and bases that earned him the popular nickname ‘Corrosive’.

At first, he detested the nickname and would quickly respond: “Who shouted corrosive?”. The classroom would fall dead silent!

As this nickname gained wider popularity in the school, he accepted it, but grudgingly. He continued to teach this class and be their Form Master from Form Four to Upper Sixth in 1968.

Mr Dontwi motivated one of his students to take to teaching, after his University education, at Mfantsipim and by astute mentoring, he encouraged this individual’s teaching career and performance at the School.

As a teacher, Mr Dontwi was thorough, systematic, patient and supported theory with practical demonstrations. He ensured that all assignments were marked and discussed in class.

At the Sixth Form, he paid particular attention to practical details, especially how to weigh chemicals to prepare solutions for titration and analysis.

His teaching of Chemistry influenced many of his students to take the subject as their favourite course. Although a friendly teacher, he maintained discipline by ensuring strict attendance to classes , punctuality to class, and strict adherence to laboratory standard operating procedures and submitting class assignments on time.

He rose through the ranks as House master, Senior House master, Assistant Headmaster and finally, Headmaster of the School. In all these positions, he acquitted himself creditably and with distinction.

He assumed office as Headmaster of Mfantsipim School in 1980, a very difficult time in the history of this country, when the exodus of teachers to seek greener pastures outside Ghana — especially to Nigeria, was at its peak. With a depleted staff, Mr Dontwi had to double as Headmaster and a full time Advance Level Chemistry teacher.

Again, he had to navigate through these difficulties cautiously, diplomatically, and tactically. Discipline among students was at a low ebb.

He countered this firmly and decisively at times, incurring the displeasure of many, interestingly including old boys of Mfantsipim, some of whom sadly wanted his dismissal.

As a teacher and an administrator, he made time for recreation. He played hockey in his youthful days and was a member of the formidable Cape Coast Hockey Club of the 1970s and 1980s.

As he aged, he stuck to ‘dame’, a game of checkers he played every evening when time permitted. As Headmaster, he was fair, firm, accommodating and quite loyal to Mfantsipim and the Methodist Church.

He improved relations between the School, the Church, the old boys and parents, resulting in stakeholders providing more substantial assistance to the school in its hour of need during the difficult periods.

By his death, Mfantsipim School has lost one of its most dedicated Headmasters whose humility was a great asset to the School. We extend our heartfelt condolences to the wife, children, and the wider extended family. May the Good Lord grant them the fortitude to bear this irreparable loss.

We — the Class of 1966 — recollect, with fond memories, our first encounter with Mr Dontwi almost 60 years ago. We will always remember his teaching skills, friendliness as a Master, and his great sense of humour. May the Good Lord receive his soul at last.