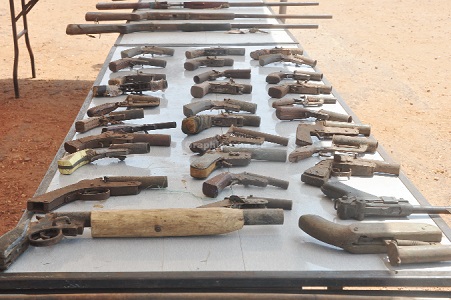 Our Constitution, which majestically perches at the apex of our laws, does not specifically guarantee Ghanaians the positive right to guns.

Persistent horrific occurrences elsewhere abroad and sporadic sad incidents here at home bloodily stain a clear positive right under any constitution to own and use guns.

The right to own guns appears to have been stipulated in the Second Amendment to the Federal Constitution of the United States of America:

“A well-regulated militia, being necessary to the security of a free State, the right of the people to keep and bear Arms, shall not be infringed.”

Against four liberal Justices in spirited dissents, five conservative Justices of the Supreme Court of the United States have given an originalist interpretation of this Second Amendment to mean that Americans have a right to own usable guns in the case of District of Columbia v Heller decided in 2008.

The exercise of the Second Amendment constitutional right to own and use guns by some in the US has seen mass massacres of fellow Americans at homes and concerts, in shops, classrooms and nightclubs and even in the most sacred of places: churches, synagogues and mosques.

The evil exercise of the right to own and use guns has cut short young and promising lives, leaving many in that country to question the propriety of the Second Amendment.

Under our Constitution, to be clear, Ghanaians do not have a clear positive right to own and use guns.

But Ghanaians, to be clear too, are not forbidden under the Constitution to own and use guns. Ghanaians may, in fact, legally obtain guns if they meet the requirements under the Arms and Ammunition Act, 1972 (NRCD 9), the primary legislation on arms in Ghana. Resultantly, guns are in the hands of some Ghanaians, sometimes in evil hands.

The evidence points to a continuous increase in the possession of guns, including in the hands of those with unlawful and evil motives for obtaining them.

Yet our guns safety jurisprudence is nascent, if existent. Our gun safety legislation is unjustifiably unenforced.

This lack of gun governance persists despite the pains that gun crimes continue to cause in the country.

Ghanaians reel frequently from pains of the criminal use of guns. On May 28, 2022, a lawyer, Richard Badombie, was fatally shot on his way to Jirapa on the Bole-Bamboi highway in the Savannah Region by armed robbers.

The diabolic cowards who shot him ran away with their tails between their legs on hearing the dog bark in the car which Mr Badombie was driving.

The sad end of Mr Badombie is one of many sad fates of victims of gun crimes in Ghana. The loss of lives to gun crimes is random, and anyone could be the next victim. Even armed security officers are not exempt from gun crimes.

The Minister for the Interior, Mr Ambrose Dery, recently revealed that about 15 police personnel die each year in the line of policing our dear country.

The Police in Ghana and other security agencies are paying the ultimate sacrifice in the battle against the unlawful use of guns.

The illicit and unlawful use of guns is taking so many lives of our compatriots.

While we may not be able to completely prevent the loss of every single life to gun violence, we can do far more to drastically curtail the loss of lives to gun crimes by aggressively enforcing the existing laws governing the licensure and acquisition of guns along with promulgating laws to tighten the loose ends and cover the loopholes in our guns control.

Gun violence and related crimes have a global trail, requiring Ghana to engage international, continental and regional partners in the strive for gun safety.

ECOWAS is aware that arms violence in one country affects the others and is taking steps to shepherd arms brokering activities in the region.

The ECOWAS Small Arms and Light Weapons Division (SALW) is understudying a Report on arms regulation.

The ECOWAS Arms Brokering Regulations, if properly followed through, would ensure that member states supervise how guns are imported and exported, transferred and diverted within the region.

Elsewhere, gun violence leads the causes of death. In the United States, for example, gun crimes have killed more people than the lives lost in all the wars that Americans have fought since the American Revolutionary War.

The guns are coming to Ghana in numbers and sophistication. If guns proliferate in the wrong hands, as appears to be the case now, the odds are high that you could die of a gun crime. Such a death is meaningless. It needs not happen.

The writer is a lawyer/doctoral fellow at Fordham Law School, N.Y., USA. E-mail: This email address is being protected from spambots. You need JavaScript enabled to view it. Cell