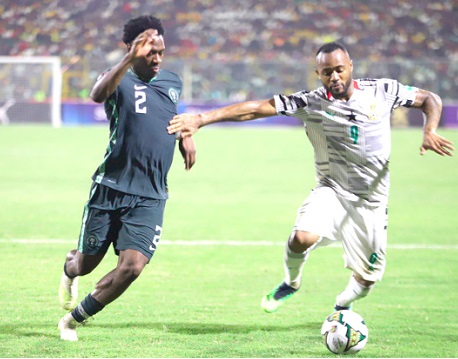 Jordan Ayew (right) controls the ball with Ola Oluwa Auna close on his heels in their match at the Baba Yara Stadium in Kumasi. Follow @Graphicgh

As you no doubt must have read from these pages on several occasions, I am no football fan.

Aside bereavement, I can think of no other reason to forgo my fufu meal.

I find the idea that someone would lose their appetite over a lost match quite strange.

However, certain exceptions apply to my indifference, the first of which is when the Black Stars are engaged in a major tournament.

Actually, let me revise that to specifically when the Black Stars clash with Nigeria’s Green Eagles. Of course, in the firmament, the stars sit and tower way above the mere eagle, but that has not always translated into footballing terms, sadly.

And so it came to pass that on Friday, the Stars met the Eagles in Kumasi for a World Cup qualifying match.

This was a big deal, because our rivalry with Nigeria is literally on all fronts, including the famous Jollof War that has been going on forever.

A football clash, therefore, evokes all the little battles and sabres rattling on each side. My Nigerian friends and I exchanged a flurry of Whatsapp messages over what each side predicted would be a walloping of the other side.

True, the national team has on many occasions caused many Ghanaians deep heartaches and despair, but somehow, as pertains in a bad marriage, walking away is not quite as simple as that, even though the excuse of “but for the sake of the children” does not arise in football divorce proceedings.

After a major upset, as happened in Cameroun lately, one may swear by heaven and earth that one is done with the Stars, and yet come another engagement a few months down the line and s/he begins to root for the team, albeit guardedly.

For many, it makes a lot of sense to eat before settling down to a Black Stars match because they do not want to go to bed on an empty stomach, as they definitely would if the team lost the match which means loss of appetite.

Insurance is a good thing, apparently, particularly in delicate situations such as these.

And when the final list, which of course did not move me either, because I hardly knew the names, eventually came up, another round of criticism and praise erupted among these ‘experts’.

All I was itchy for was the opportunity to give my Nigerian friends a taste of pure hell following a win by Ghana.

When it became a settled matter that the match was going to be played in Kumasi’s Baba Yara Sports Stadium, I decided I would be there to soak up the imminent euphoria and carnival spirit that I had no doubt would reverberate throughout the stadium and beyond.

I must admit quickly that I have been to the stadium on several occasions, but that was back in secondary school during inter-college athletics events.

Alas, as it turned out, I was unable to make it because I had to travel out of the country ahead of the match for work.

But I saw the photographs and video clips from the packed stadium and cementing the fact that indeed my beloved Kumasi is the capital of Ghanaian football. No ifs, no buts.

Ahead of the match, a couple of my Nigerian friends assaulted me most brutally with photographs and video clips of the Nigerian team disembarking in Kumasi and also of the press conference held with what their compatriots back home call a ‘banku’ table.

All I could do was grimace and hope these embarrassing images and footage had been photoshopped.

I prayed fervently for an emphatic win for Ghana to drown out the ensuing Nigerian ridicule.

As it turned out, the gods conspired to deny either side its desperately desired victory with a goalless draw, evoking former Nigerian Head of State General Yakubu Gowon’s famous declaration at the end of his country’s devastating Biafran civil war that “there is no victor, no vanquished”.

Because I was (and still am) out of town, I did not have the opportunity to watch the match, relying only on snippets of information from Facebook and Whatsapp platforms.

In a way, whilst I was disappointed that we had not clinched the match with an emphatic victory and therefore my arsenal had been rendered impotent, I consoled myself with the fact that it could have been worse with a loss to the Nigerians, in which case I would have had to find a hole and crawl into it, to avoid the onslaught that would inevitably have come my way.

Ghana and Nigeria share so much in common and go back a long time, especially in pre-independence and post-colonial politics, migration, commerce and many more, and yet are almost always at each other’s throat, albeit in a friendly way.

Perhaps we are like bickering siblings, drawn to each other and sharing deep bonds, but at the same time finding space for little fights that ironically then reinforce those very bonds.

We have our varied notions about each other and yet we can’t seem to have enough of each other.

Of course, on the critical subject of jollof, Ghana wins hands down. My Nigerian friends think it is quite a disgrace I have never been to their country and I think this year, I must make it a point to visit Lagos and sample what delights it has to offer.

By the way, I am delighted to learn that when I arrive in Ghana tomorrow, I will not have to fork out $50 for a COVID-19 test at the airport.

The saving could go towards a hefty fufu meal and a cold beer, with lots of change left over.