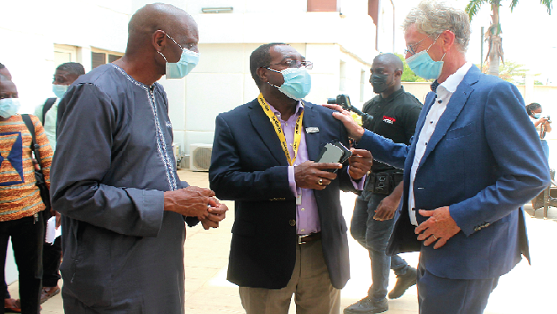 As the European Union (EU) takes radical steps to rid the cocoa value chain of child labour and other unacceptable practices, the onus has fallen on cocoa producing countries that largely depend on the produce for survival to demonstrate practical commitment towards the fight to avert a ban in the near future.

The EU in January this year informed cocoa producing countries to brace up for stricter cocoa laws that the body hopes to ratify later this year with the aim of protecting forests, curbing child labour and ending farmer poverty.

Last year, the EU launched an initiative to improve sustainability in the cocoa industry in collaboration with officials from the world’s top cocoa producers - Ghana and La Cote d'Ivoire - as well as member states, cocoa growers and civil society.

With Ghana and La Côte d'Ivoire accounting for more than 60 per cent of the global cocoa beans production, the sector is crucially significant to the two economies as it makes up 20 per cent of all exports by value, as well as being a major employer.

The EU represents the leading destination for Ghanaian and Ivorian beans. According to Trase, a supply chain transparency initiative, in 2018 and 2019, 65 per cent and 54 per cent of Côte d'Ivoire's and Ghana's exports (by weight), respectively went to the EU and UK.

Thus any policy directive from the EU bloc has far-reaching implication on the economies of the two countries. The cocoa industry is estimated to be worth 80-100 billion dollars annually. It is disheartening that Ghana and Cote d’Ivoire only receive around three per cent of global revenue.

Child labour, forced labour and discrimination are illegal in all cocoa producing countries in West Africa. Nonetheless, in spite of many years of sector-wide interventions, these challenges persist in the sub-region.

Globally, countries are adopting measures to sanitise the cocoa supply chain. Existing national regulations on transparency – such as the UK Modern Slavery Act, the California Supply Chain Transparency Act, and the Australian Modern Slavery Act – have made requirements for transnational corporations to report on forced labour and human trafficking in their supply chain.

In 2016, the first ladies of Ghana and Cote d’Ivoire at the time – Mrs. Lordina Mahama and Mrs. Dominique Ouattara, respectively, signed a joint declaration against child labour in cocoa production.

Earlier this month, the two countries signed another agreement in Accra, committing to end child labour, support sustainable cocoa production, and push for better prices for their beans to improve the income of farmers.

However, the criticism has been that globally, such laws and declarations appeared toothless as they do not hold the powerful accountable, but rather demands that farmers change.

The concept of child labour has over the period divided opinions about what constitutes child labour considering the socio-cultural practices of farmers in the sub-region.

Some analysts and stakeholders have repeatedly challenged the EU’s description of child labour, arguing that the concept could not be applicable in all situations given that culturally children are encouraged to support their parents on the farm as a way of introducing the children to farming and ensuring continuity.

Speaking at a stakeholder meeting to discuss emerging issues in the cocoa sector in Accra last month, the Regional Director of Solidaridad West Africa, Mr. Isaac Kwadwo Gyamfi, urged cocoa producing countries to “sit up and respond” to the growing misinformation against the origins of cocoa.

He said West African countries, for instance, “need to be more aggressive” in tackling the issue and must establish a balanced reportage on what constituted child labour.

“If you take your child to the farm to support with work within a reasonable time frame, that is not child labour. That is child work,” he said.

Speaking with journalists at the end of a meeting, the Honorary President of Solidaridad Network, an international civil society organisation, Mr. Nico Roozen, urged Ghana and Cote d’Ivoire to set their own national standards and use that as a basis to negotiate with the EU over the proposed sustainability legislation on cocoa production and supply.

He further urged the governments of the two countries to conduct a detailed analysis of the proposed EU legislation and establish its advantages and disadvantages prior to the dialogue.

Mr. Rozen cautioned that the legislation could create more bureaucracies in the supply chain which, he added, could increase operational cost.

“All the regulations they (EU) are presenting are not solution-oriented and they don't have the incentive to bring the practices to the next level. It's restrictive and costly and I am not sure it will solve the issues,” he said.

“The best way forward now is to do an analysis of the pros and cons and start a dialogue. So long as nothing is definitive, you need to do a detailed analysis and set out a clear negotiation strategy and as a serious negotiation partner, you have to present your own ambition and clear plans that's realistic to your own situation.”