Digging our own graves 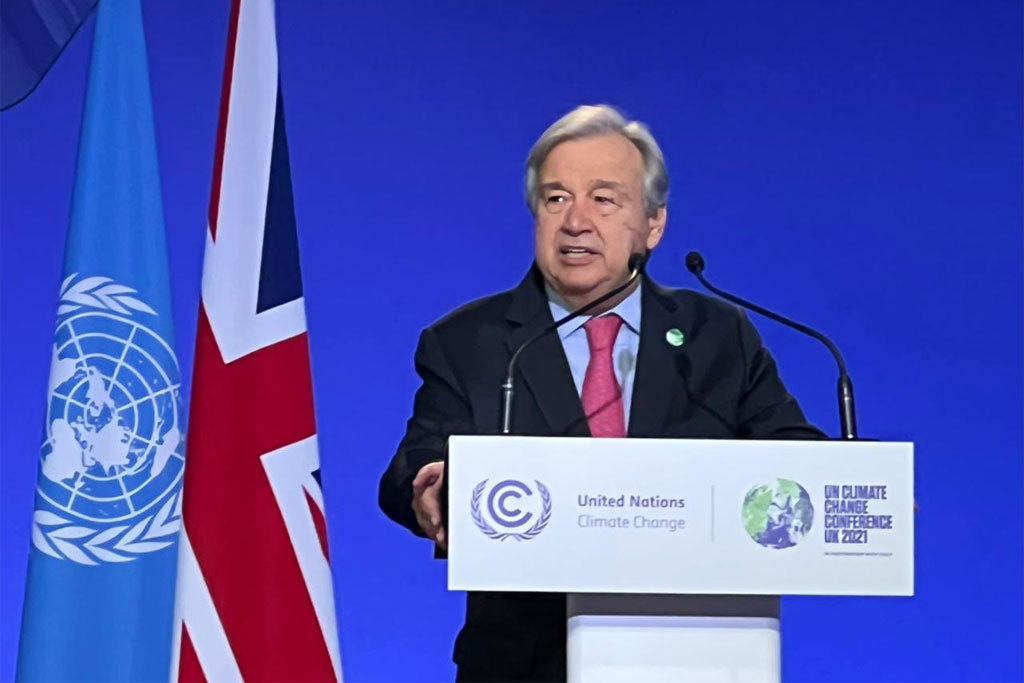 “We are digging our own graves!” — UNSG Antonio Guterre

In his opening address at the UN Climate Conference COP-26 in Glasgow, Scotland on November 1,2021,UN Secretary-General Antonio Guterres had very strong words for the 197 nations, particularly the developed/industrialised world.

The COP stands for “Conference of the Parties,” where “Parties” refer to the nations that agreed to a new environment pact, the UN Framework
Convention on Climate Change at a meeting in 1992.

The pact was originally signed in Rio de-Janeiro, Brazil in June 1992 by 154 nations at the UN Conference on Environment and Development, informally called the Earth Summit.

The Secretary-General of the United Nations, Antonio Guterres stated that, “The six years since the Paris Climate Agreement (COP-25) has been the hottest on record. Our addiction to fossil-fuels is pushing humanity to the brink.

“We face a stark choice - either we stop it or it stops us.

“Enough of brutalising biodiversity, killing ourselves with carbon, treating nature like a toilet, burning, drilling and mining our earth deeper. We are digging our own graves!”

He added that at the current rate of global-warming, the 1.5 degrees Celsius targeted at COP-25 would be exceeded.

However, in the first 20 years only of the 21st Century, the sea has risen by 60cm. Unless COP-26 seriously addressed Climate-Change, island nations would be submerged.

In his contribution, former US President Obama decried the absence of the leaders in Glasgow of two of the world's worst polluters, China and Russia. Carbon emissions from coal, oil-and-gas constitute the largest pollutants in the developed world, the direct result of massive industrialisation and materialism.

The Amazon Forest of Brazil and the Congo Forest of the Democratic Republic of Congo (DRC) have been described as the two lungs-of-humanity because the forests absorb carbon dioxide and produce oxygen for our sustenance.

However, under President Bolsonaro, Brazil has embarked on an unprecedented depletion of the Amazon forest for cattle-ranching for beef production.Unsurprisingly, Bolsonaro did not attend COP-26.

Significantly, at the time of the Glasgow Conference, the Chinese were busy digging cobalt in the DRC.

The DRC has over 70 per cent of the world's reserves of cobalt.

With the desire to change from fossil-fuels, the next generation of cars will be electric-powered.

Their batteries are made from cobalt, hence the rush for the mineral not only by China but by the car-manufacturing nations.

This is leading to serious environmental degradation as trees are hewn down before digging for the cobalt starts.

Most inhumane ,however, is the maltreatment the Chinese subject the Congolese to. This includes physical beatings and putting them on starvation wages.

Another highly toxic mineral used for capacitors in mobile phones blamed for birth defects in the DRC is coltan.

Unfortunately, 80 per cent of the world's reserves are found in the DRC. Like cobalt, the digging of coltan by foreigners in unregulated and exposes Congolese to cancers.

Foreigners are actively helping the DRC dig her own grave!

On November 21, 2021, President Tsisekedi called for a review of all mining laws in the DRC. One hopes he will back his words with action.

The 17-year-old Swedish environmental activist Greta Thunberg scathingly indicted world leaders as using COP-26 as a talking shop for “bla-bla-bla!” with over 200 jet-exhaust-emissions ferrying them to Glasgow.

She accused them of lack of commitment to the environment and climate-change.

In Ghana, “galamsay” has degraded our forests and lands, polluted rivers and poisoned underground water with chemicals such as cyanide.

Children have dropped out of school to do illegal mining, with drug-usage and prostitution resulting.

In recent times, environmentalists have sounded alarm-bells about destroying nature's biologically diverse ecosystem of the Atiwa Forest, a veritable source of drinking-water for Ghana, just to allow foreigners to mine manganese.

Are we deliberately pressing the self-destruct button for our current gain at the expense of future generations who have to import drinking-water?

Are we proving UNSG Antonio Guterres right that, “we are digging our own graves?”

Antonio Guterres' words “we are digging our own graves “may have been directed at the world's leading polluters, the developed world.

In Ghana ,however, unemployment, “galamsay” and its attendant cross-cutting evils such as depleting our forests, poisoning of both surface and underground water, and children dropping out of school into armed-robbery and prostitutes, amount to “digging our own graves.”

If we allow it as the DRC has, foreigners will help us “dig our own graves.”