Defeated by the typhoon in Shanghai

I took the bullet train from Beijing to Shanghai, the second stop on my three-city scheduled trip to China. If you want an example of the technological advancement of the Chinese in the past few years, a good place to start will be the bullet train experience. The Fuxing (rejuvenated, to you the uninitiated) bullet trains started operation between Beijing and Shanghai in 2017 and they are a joy to ride.

We took one that takes six hours to do the 1,225-kilometre journey from Beijing to Shanghai. We couldn’t get tickets for the five-hour one, and had to settle for the six-hour one. Obviously, I would have drawn the line on taking the “snail-paced seven-hour one”. My 160-kilometre journey from Accra to Abutia these days takes three hours and has been known to take four hours.

The train was averaging 307-kilometres an hour and it was luxury on rails. I would take that train any day than a first-class seat on any flight. 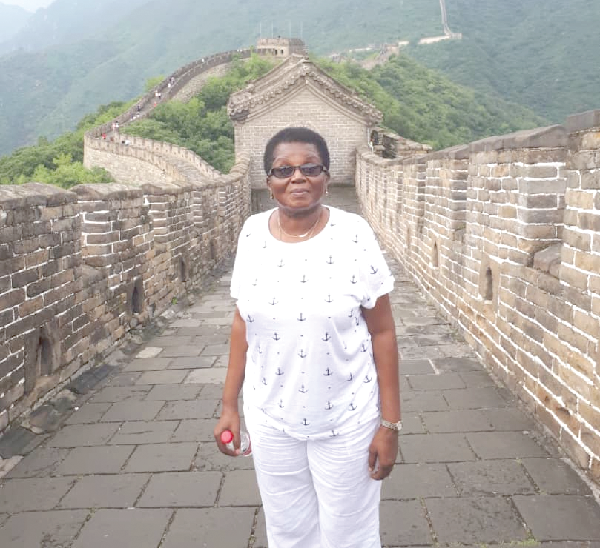 The writer at the Great Wall

We got to Shanghai and into the rain and rain and rain. Shanghai is a city that has come to terms with water; it has to deal with the ocean, rivers, lakes and during the rainy season, a lot of water; and this time we had arrived right in the midst of a series of typhoons.

The drainage system in the city is a wonder; but they don’t take it for granted. I thought they were overdoing it when in the rain, I saw a truck sweeping the street. I asked if it couldn’t be done after the rain and was told, in a matter of fact that with the leaves and litter, it is a good idea to sweep and gather the rubbish in the rain so the drains are not clogged and the water can run without hindrance. We have a lot of water, it was pointed out to me, as though I couldn’t see.

At every turn, my mind went back to Ghana and what one rainfall does. I had never been in the midst of a typhoon and I thought how great it was to experience it in a place where so much has been done to tame nature and you can watch the wonder of the whistling winds swooshing the rain around.

But it meant I was unable to go up the 632-metre, 128-storey skyscraper Shanghai Tower, which has the world’s highest observation deck within a building or structure and the world’s fastest lifts at a top speed of 20.5 metres per second.

They so wanted to show me this particular example of their technological wonders. I went to see it in the rain but the typhoon had forced it to be closed.

After having to spend an unscheduled extra night in Shanghai, the typhoon lost its attraction; all flights were grounded.

This meant I couldn’t get to Guangzhou, the last stop on my scheduled three-city trip. When the rain and the wind abated and it became possible to fly from Shanghai, the typhoon moved to Guangzhou and that airport was also closed temporarily.

There were many reasons why I wanted to go to Guangzhou.  That, I was told, is the place for all the Africans in China and the place to shop. As it turned out, however, I was defeated by the typhoon, we had to give up on Guangzhou and go back to Beijing to take the flight out to Accra. The bullet train back then to Beijing, and to the last day of my trip.

Without Guangzhou, I decided shopping wasn’t meant to be part of the trip, and I was quite ready to risk being the only Ghanaian to have gone to China and not done any shopping. I did go to a famous shopping haunt of visitors from Africa, the Silk Tree Shopping Mall in Beijing.

It is the unabashed home for all fake designer goods. Shoes, handbags, leather goods of all kinds, jeans, clothes of all kinds, toys and  electronic goods. There are five floors of small-sized shops, all full to the brim. They do not pretend that the shoes and handbags they are offering are indeed Christian Dior or Salvatore Ferragamo items. If you look closely, you will notice the brand names printed on the goods are often spelt wrongly.

It is a grand charade played out on both sides by enthusiastic sellers and equally enthusiastic buyers. It extends to what you pay for the goods as well. By the way, the fact that you paid 125 Renminbi for something that was displayed at 1,350 Renminbi does not necessarily mean you have had a good buy. You can take it as a given that you will never outsmart a Chinese trader at the Silk Tree Mall. They have 5,000 years of trading skills behind them, which could never be overridden by 70 years of communism.
They will accept United States (US) dollars but no one thinks you are doing a great favour by paying in dollars instead of Renminbi.

I noticed it is only the visitors that use cash, they themselves rely on electronic transactions to conduct all their monetary businesses, big or small. Everything on sale has a barcode, and with one click of the smartphone, it is paid for; in the restaurants, in the trains, in the shops and on the roadside outside the towns.

I wondered about this enthusiastic wholesale embrace of technology by the Chinese as I delved into their history and went to visit some iconic historical sites. The Forbidden City, right in the centre of Beijing, north of Tiananmen Square is an obvious place to go. It is  the world's largest palace complex and covers 74 hectares, surrounded by a 52-metre-wide moat and a 10-metre-high wall, with almost 9,000 rooms. It was the home of 24 Chinese emperors for 500 years. It took 14 years to build and almost 600 years since its completion, it inspires awe.

I took two things away from that visit: (1) Mathematics is critical for any society that wants rapid progress and orderliness is not new to Chinese society, (2) concubines have always had a better deal than wives.

I went to The Great Wall on the last day. It cannot be exaggerated and breathtaking is the apt word to describe it. One little bit of tittle tattle: I rode in the same cable car that Melania Trump did to the place where you start walking.

Again, after I was overwhelmed and impressed and my mind went to the pyramids in Egypt, I left in the hope that the New Patriotic Party (NPP) Manifesto promise to do something about Mathematics in our country would indeed happen. Then we can think of transforming our economies.

There will be a third instalment of this travelogue; the food, the voices that I heard and what I make of it all.

The writer is a former Editor of the Daily Graphic, BBC Correspondent and a former Minister of State.