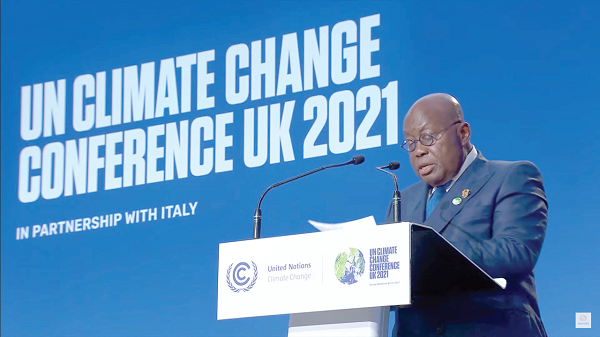 Ghana this week joined the rest of the world in Glasgow, United Kingdom, for solutions to keeping the rising global temperature below 1.5 Degree Celsius.

It will be the 26th United Nations Framework Convention on Climate Change (UNFCCC), the biggest meeting on UN’s calendar.

That, he indicates, has altered the natural course of for instance, the rainfall pattern.

Rains have become unpredictable and erratic.

Equally, the average temperature in the country has increased by more than a degree over the past 10 years.

Dr Tachie-Obeng’s observations align with the assertion that the past seven years are on track to be the seven warmest on record according to the provisional World Meteorological Organisation State of the Global Climate 2021 report, based on data for the first nine months of 2021.

It attributes the cause to human activities.

Although countries like Ghana and the rest of Africa have contributed less than four per cent of the global emissions, their citizens are the most impacted by the phenomena.

Ghana’s economy and most rural livelihoods rely on natural resources-based sectors, such as, agriculture, energy, water, transport, which are vulnerable to the impact of climate change.

Data available to the Ghana News Agency (GNA) shows that many farmlands were flooded in the months of August and September, affecting the livelihoods of some 40,000 people nationwide.

In the Upper West Region alone, 6,880 acres of farms were destroyed by the floods. It affected the livelihoods of 6,623 farmers.

Even before the unusual rains set in, some crops were already failing due to long spells of extreme dry weather conditions.

Floods in parts of Ghana

The minister of Food and Agriculture, Dr Owusu Afriyie Akoto, is concerned that climate change is affecting the country’s food production.
Abdulai Antiku Seidu, an agro-inputs dealer, who has been supplying quality seeds to farmers under the government’s signature, “Planting for Food and Jobs (PFJ)” programme, under which farmers are given fertilisers and planting materials to boost crop yield and returns, said he would be unable to meet the demand of the farmers, in the coming planting season.

Distraught looking Domayiri Yendooma, 71, lost her home and two-acre farm to the floods and has been wondering where her next meal will come from.

Of the key propositions of the Ghanaian delegation to the COP26, is funding to implement and upscale adaptation measures in the agriculture sector and build resilient farmers.

Dr Daniel Tutu Benefoh, who is the country’s Focal Person to the UNFCCC, said that Ghana desperately needed funding to implement interventions in the Nationally Determined Contributions (NDCs) in the area of smart agriculture, landscape restoration, access to water and alternative livelihood skills to build resilience among farmers and fisherfolks.

“Having a facility to harvest water for use when the rains cease is crucial. Farmers especially in the north can have a second season and even plant high yielding vegetables for consumption and sales. By this action alone nutritional issues will be sorted,” he said.

He says the country’s updated NDCs with some 47 adaptation and mitigation measures on climate change requires between US$ 9.3billion and US$15.5 billion of investment to undertake climate interventions from the year 2020 to 2030.

The 19 policy actions, which translated into 13 adaptation and 34 mitigation programmes of action, would generate absolute greenhouse gas emission reductions of 64 million tonnes of carbon dioxide-equivalent (MtCO).

It will also help to avoid at least 2,900 premature deaths per year from improved air quality, create over one million decent and green jobs and cumulatively benefit nearly 38 million people with the majority being the youth and women.

Dr Benefoh, touching on the second goal, explains that Ghana is endowed with natural resources such as hydrocarbons and minerals that need to be harnessed to improve the livelihood of people but the global agenda to shift from a carbon-based economy to renewables was prohibiting her from exploring the resources.

“We are going to make our case that we cannot allow these resources to remain untapped because it will compromise our developmental efforts.

We are very mindful of the fact that in doing so we will exploit it in a sustainable way and keep emissions low,” he said.

The UNFCCC Focal Person indicates that Ghana will join force with the Africa Group not to only call on the developed world to meet its annual $100 billion climate finance commitment but also the removal of restrictions to access the green fund to implement its NDCs since Africa countries are equally vulnerable as other Least Developed Countries (LDCs).

“We emit very less but the impact on us is massive therefore access to resources made available for adaptation and mitigation should be improved.

Currently, there are preferential treatment for LDCs in terms of disbursement.

The current arrangement is not fair to us.

The British High Commissioner to Ghana, Madam Harriet Thompson, expressed the hope that the voice of Ghana would be heard, and that her delegation would return home with new networks, allies and partners committed to investing in Ghana’s adaptation and transition. -GNA

Article part of the 2021 Climate Change Media Partnership, Journalism fellowship by Internews’ Earth Journalism Network and the Stanley Centre for Peace and Security.