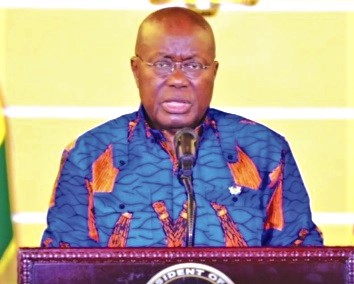 President Akufo-Addo during his speech on Monday, October 31, 2022 on the economy
30.5k Shares

It must be quite a torrid experience being a government communicator at present, and I feel both a sense of sympathy and admiration for those communicators who wake up every morning and present themselves on radio or television panel discussions on what is, no doubt, the number one issue on many lips – the economy.

In a way, it must be quite akin to strolling voluntarily into a den full of hungry, irritated lions.

There is no doubt that times are hard, with the price of everything from ‘pure water’ to rice, flour, oil and other basic commodities jumping hysterically in recent weeks in response to the exchange rate, and fuel price increases have not helped with transport fares either.

The pinch is felt everywhere. We are in crisis, as the President admitted the other day in his broadcast to the nation, and it is no laughing matter.

The head of the finance minister is being demanded by many, including members of parliament (MPs) from the Majority in Parliament. Some, including demonstrators at the ‘Kume Preko II Reloaded’ demonstration last Saturday, have even scaled up to demand that the President must step down and take his Vice-President along with him.


I think it is an unrealistic demand that will only result in a constitutional crisis. But then free expression is guaranteed by our constitution.

We do not operate a parliamentary system where resignation of the prime minister results in fresh party elections for the next leader to serve as prime minister, as has happened in the United Kingdom (UK) recently. Our presidents are elected for a four-year term and that is the mandate he and his government have.

The party in power does not get dislodged from power with fresh elections held even if the president and his vice resign in tandem ahead of the end of their tenure.

On a personal level, I have experienced a spike in requests for financial support, both from people I know and others I have never met, the latter on Facebook in particular.

In many cases, the amounts requested are not much, and mostly it is to buy food, medicine or even to cater for transportation to and from work in a particular week, because people simply cannot afford some bare necessities.

I have also been berated by friends and acquaintances over the economic situation, and in most cases, they just want to vent their frustrations because they do know clearly that I am nowhere near the levers of power and therefore cannot do anything about their personal experiences or issues.

But I suppose working in government makes one a useful punching bag, so I just go with the flow.

But where I drew the line in the sand the other day was a young man in his late thirties telling me that even though he was not born during the 1983 famine, he was very sure that it pales into insignificance, compared to what we are going through now.

How he could, on one hand, accept he was not born then, and on the other, undertake an emphatic comparative analysis truly amused me.

I could not allow him to go down that path because the facts simply do not support his claim. I had to set the records straight.

I was 15 years old at the time, and firmly but politely, I shared with the young man my recollections of what it was like back then, including the scarcity of food and other items, the bush fires, the effect of the deportation by Nigeria of over one million Ghanaians back home, fuel shortages and the general security issues in the country arising out of the political climate back then.

Of course, this is not to downplay the realities of today and the many hardships that our people are going through – far from it.

Whether 2022 is worse than 1983 was or vice versa is hardly the point, because neither is or was acceptable.

But it is also important, in the narrative, to get things right without unnecessary hyperbole. Facts are sacrosanct and they have to be, thus, preserved.

From my little corner in the government space and in my personal dealings, the past few weeks have taught me a great deal about communication in times like these, and I have been making notes.

As I stated earlier, in many cases, when people complain about a situation, they know they cannot get solutions immediately, or that, realistically, the person they are complaining to can do anything about their situation. But having the space to vent on whatever platform one can is a huge relief.

Calm listening is a great tool and so is an acknowledgment of the problem, even if one has heard it over and over.

There is no need denying the fact of the crisis or its extent. It is what it is, even if there are disagreements over how and why we find ourselves where we are. We can argue till pigs begin to fly over the influence and effects of COVID-19 or the Russia-Ukraine war. We can argue ad nauseum over the fact of a global situation and its effects on economies worldwide. For me, those arguments are a distraction. It is what it is.

Generally speaking, I do not think many people in this country respond favourably to the fact of a global situation. For them, however, bad things may be in Europe or North America, it is nowhere near what we are witnessing here. Nothing will budge this view and I do not begrudge them. After all, rising interest rates or food inflation in Canada or Spain are meaningless and therefore irrelevant to my great aunt in Kumasi’s Ashanti New Town. What she simply wants to know is what ‘aban’ is doing to bring down the price of yam or garden eggs at the Kumasi Central Market or the transport fare to our hometown Ankaase.

I have also noticed that in these hard times, many people simply get irritated by references to the Free senior high school (SHS) programme and other flagship initiatives by this government, as well as its other achievements since 2017. After all, when a man’s belly is on fire, reminding him you once bought him beautiful clothes is hardly any comfort at that raging material time.

Further, if government is to carry the people along on this difficult journey, then there must be a strenuous effort to avoid waste and what late President Mills famously called ‘profligate spending’, else any assurance of ‘we are in this together’ rubs people the wrong wat and only evokes public disdain and derision.

In all of this crisis and the way ahead, I take inspiration from the famous Osibisa song ‘Woyaya’, released in 1971, which was also the signature tune of the famous Osofo Dadzie show in the 1970s and 1980s;

It will be hard, we know

And road will be muddy and rough

But we’ll get there.

I know hope does not cook yam. But I suppose it is not a hanging offence to salivate in hope whilst waiting for the water and firewood to cook it, either.