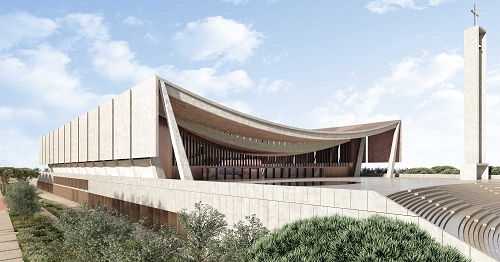 Once again, the nation finds itself in the eye of a very public storm, this time a fresh one over issues surrounding the construction of a national cathedral.

The previous storm was over the basic brass tacks - the reasonableness of the very idea itself, together with its location and other allied issues.

Now it has gone a notch higher to include alleged inconsistencies over the extent of the state’s financial involvement in the project, lots of back and forth over Pastor Mensah Otabil’s involvement as a trustee, various payments made so far and whether or not this project should be a priority project when schools lack funding, hospitals lack basic equipment and many roads are essentially death traps, among others.

All these dovetails into the context of the current economic difficulties in this country.

Of course, strong public arguments over public projects and monuments have been with us for quite some time.

In contemporary times, the Accra International Conference Centre, the National Theatre and the Jubilee House come readily to mind as projects whose construction occasioned public storms in the prism of failing schools, under-equipped hospitals and bad roads and general poverty which could all have been improved one way or the other with all that cash.

It is further said that back in the day, big projects such as the Tema Motorway and the Akosombo Dam that were undertaken under President Nkrumah were heavily criticised as grandiose and overambitious for a new, young country.

Of course, the critics were wrong then, even if they genuinely held their convictions.

Perhaps the bane of our Fourth Republic politics, in particular, is that big projects, both physical and otherwise, are owned and touted by political parties in government as party achievements, meaning it is a tad difficult to bring together both government and opposition parties to see a project as truly national and agree on it without the usual partisan bickering.

This clearly is because of the electoral harvest that usually is associated with such projects.

Once you have government elements digging their heels in and perceiving all criticism to mean anti-government ‘noise’, and opposition elements firing on all cylinders just for the sake of it in an effort to make the government squirm, then you have a recipe for political chaos and snail-pace progress on a truly national scale.

Ordinarily, where one stands on an issue should not be determined by where on the political divide one sits. But it appears in this country we did not quite get the memo.

I believe we have moved away from the baseline of whether or not we need a national cathedral. That was in 2018/2019 thereabouts.

We have moved beyond whether to locate it in central Accra or Dodowa, Nsawam or other outlier locations, as was being advanced in certain quarters, and the ground has actually been broken in central Accra.

Back then, there were several legitimate arguments against the national cathedral project, and in a vibrant political system such as ours, the political market square was awash with them, as one would expect.

In the same context, defenders of the cathedral also made their views known rather forcefully. That is the essence of the kind of democratic pluralism that we must build as a society.

I believe the conversation today should revolve around the ‘how’ and ‘when’, and not quite the ‘if’.

It is legitimate for Parliament to demand accountability from the government on what has been spent so far on the project.

If public confidence trust, not just with this particular project but with governance as a whole, is to be enhanced, then transparency and accountability are key, and those in charge of the various aspects of the cathedral project must be forthcoming with the relevant facts to put minds at rest.

Credibility is key, and any public perception to the contrary is likely to impact negatively on the project as a whole.

Remnants of ‘if’ argument

It appears that a few years after the idea of a national cathedral broke, the public discourse on social media platforms still retains some on the fundamental arguments of whether or not we need a national cathedral, rather than what I believe to be the more relevant questions on accountability, transparency and timing surrounding the execution of the project.

Perhaps it is an indication of the depth of sentiment in section of the population, but I am not quite sure of a volte-face as far as this project is concerned.

As I have stated earlier, several legitimate arguments have been made against the cathedral. However, the argument I find most curious is the claim that God does not dwell in buildings.

Of course, it is trite knowledge that an omnipresent God does not dwell in buildings. In the Bible, he ‘dwelt’ in a burning bush to speak to Moses, and again on a mountain. Several other examples abound.

Where two or three are gathered in his name, he is present, as some of us were taught in Sunday school.

Interestingly, however, many Christians who subscribe to this ‘dwelling’ argument also donate handsomely towards a new building for their church.

There is a reason new church buildings are consecrated and activities such as gambling, fighting and other vices are not tolerated there, for which reason Jesus pulled out the whip at the synagogue once.

God does not dwell in church or synagogue or mosque buildings, of course. I do not think they are built to house him in the first place, but that does not detract from the legitimacy of building them.

There is some considerable public sentiment on the cathedral project and I think government’s communication on it must gear up, confront the issues raised and engage on them in a transparent manner in order to put them at rest.

It is inconceivable that we will all see this project, or any other project, for that matter, in the same light. But that does not stop us from engagement and scrutiny.

By the way, I love fine monuments. Larabanga Mosque is next on my bucket list.

Rodney Nkrumah-Boateng. E-mail: This email address is being protected from spambots. You need JavaScript enabled to view it.