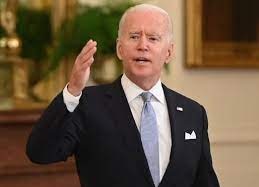 During my postgraduate studies in International Relations in 2004, I came across Prof. Kenneth Waltz’s article in which he had predicted that the United States (US) will lead the world for several years to come. He had stated in the Journal of International Security (fall 1993 edition) as follows: “For some years to come and for better or worse, the United States will be the leading country economically as well as militarily.”

As a novice then, I disagreed with him because I was biased, leaning towards another scholarly view which had predicted the fall of America as a global hegemony after 2000.

However, the invasion of Ukraine by Russia seems to have proved Prof. Waltz right. It has shown that America is a force for good for the world and will continue to remain so for a long time to come.

The attack on Ukraine is wanton, dishonourable and murderous. Clearly, Russia now exhibits signs of pride, arrogance, desperation, aggressiveness and imperious of rule.

President Vladimir Putin claimed he wanted to ‘de-Nazify’ Ukraine. He therefore forged ahead with his plan of expansion, trying to have his way like he did in 2014 in Crimea.

Obviously, he only wants to resurrect the Soviet project, enforce the Russian social system and, most importantly, prevent countries that fall within the Russian sphere of influence from becoming democratic. To achieve this, he has silenced decent, restricted information and jailed his critics.

Destructions and killings in Irpin, Bucha, Kharkiv, Mariupol, Severodonetsk and Kremenchuk are vivid examples. He is holding the world hostage and condemning developing countries to death through hunger by blocking all Ukrainian ports on the Black Sea to prevent grain exports.

His actions have led to soaring oil and gas prices globally. Clearly, he has shown that he is suspicious and dangerous to live with and must be guarded against.

Because of Putin’s aggressive behaviour, Sweden and Finland have decided to join the North Atlantic Treaty Organisation (NATO) while Denmark has opted for the European Union (EU) Security pact.

But thankfully, US president Joe Biden did not overlook Russia’s atrocities in Ukraine. He and his allies have put up a strong and united front to challenge Putin. They have been wonderful in their support for Ukraine. Together, they have spent billions of dollars in military assistance and imposed numerous sanctions on Russia as punishment for the invasion, which is superb. The unity which had eluded the EU for years is now stronger and unprecedented.

The West must help Ukraine now to defend the international order that makes liberty and freedom possible. It must help liberate all from Russia’s aggressive behaviour and warn other countries of similar intentions.

Any military assistance to Ukraine by the West is morally comprehensible because Ukraine neither did any injury to Russia nor threatened it in any way to warrant the cruel massacres and destructions.

The West is only helping to repel Russia’s aggression and, most importantly, punish it.

Sympathisers of Russia may argue that the attack on Ukraine is for self-preservation. However, they refuse to consider the dishonour and hatred the war is growing towards the Russians.

Putin consistently blame the West for causing the war, but he refuses to accept that he forced Ukraine into it. Certainly, he is responsible for the pains, sufferings and deaths from this war. He is only fired by political power to commit these gruesome atrocities.

His actions fully contradict the United Nations (UN) Charter. Therefore, the rights of Ukraine as a country must be protected for it is by virtue of this that there is a UN.

The West must not fail in its support for Ukraine, because we are not ready to live in a tyrannical world. Bravo Biden and allies, keep up the pressure to help ‘de-Putinise’ Russia and save the world.

The writer is a freelance journalist.