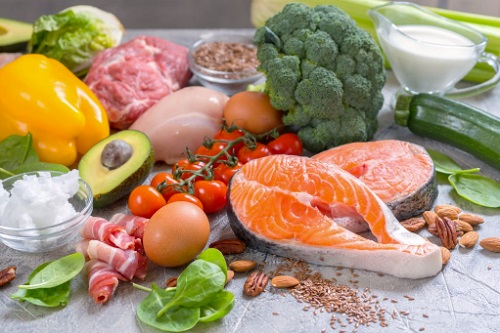 Healthy mothers and children are the foundation of a thriving nation and the first 1,000 days of a child’s life are the most critical for their future health.

Nutrition in the pre-natal stage and early childhood is fundamental to guarantee overall health and well-being.

It brings multiple benefits to the economy through a lowered rate of disease and a boost in productivity throughout life.

Yet, Ghana faces many challenges and nutrition is just one of them.

There are many potentially incredible solutions to challenges from malaria to education, from better transportation to more productive agriculture.

Where should limited resources go first? 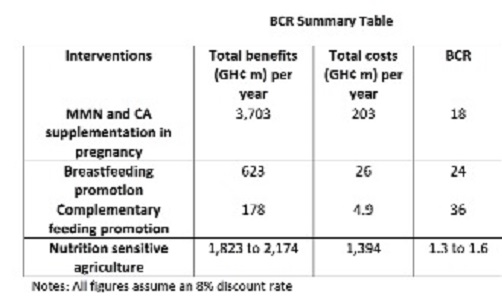 There is no doubt nutrition is an important part of the discussion.

In a new research paper, Richmond Aryeetey of the University of Ghana (UG), Paul Kwame Nkegbe and Haruna Issahaku from the University for Development Studies (UDS) and Brad Wong of Copenhagen Consensus has analysed the most cost-effective mechanisms to reduce childhood malnutrition and do the best for every cedi spent.

The economists took the best, published data to calculate the total benefits Ghana could achieve from adopting different nutrition policies to benefit the public.

Nutrition during pregnancy is crucial for a child’s development. While 89 per cent of pregnant women in Ghana already attend at least four antenatal appointments and 93 per cent receive iron-folate supplementation, pre-eclampsia and anaemia in pregnant women are still prevalent and avoidable maternal deaths are unacceptably high.

Many of them could be prevented through additional supplementation of multiple micronutrients and calcium.

Switching from one set of pills to another for all 850,000 pregnant women is relatively cheap at GH¢202 million annually and could help avoid as many as 4,209 infant deaths and 82 maternal deaths.

Every cedi spent on the implementation of this proposal would produce 18 cedis of social benefit.

Early adoption and continued exclusive breastfeeding during the first six months are extremely beneficial for a child’s development and disease prevention.

Increased breastfeeding counselling given to mothers in their prenatal and postnatal appointments, as well as improved training and protocols for healthcare professionals, would also have a great impact on health.

The costs would be shared at nearly equal parts by the women and the government: around GH¢12 million for the state to implement and an hour per day of time and inconvenience cost for the women, valued at GH¢14 million.

Over the course of two years and with 174,000 mothers included in this initiative, 745 children’s lives would be saved and approximately 160,000 cases of child illness avoided, which would create social benefits equal to approximately GH¢ 623 million.

At the total cost of only GH¢26 million, every cedi spent would deliver social benefits worth 24 cedis.

Stunting, or being shorter than normal for a child’s age because of undernourishment, has been shown to hinder cognitive development and means that the child will do less well later in life. If children get better nutrition, their brain will develop better, they will learn more in school and become much more productive as adults.

Imagine a policy that could help make Ghana’s next generation even more productive.

This is what ensuring that children have diets that are sufficiently diverse and provided at an optimal frequency up until five years of age is capable of achieving.

Child malnutrition could be reduced dramatically in Ghana through complementary feeding promotion.

The researchers found that one-on-one nutritional counselling given to 20 per cent of all new mothers would help reduce stunting in children by nine per cent and save 65 lives over the course of their first five years of life.

Fewer cases of stunting would also mean a significant boost to the economy in long-term improved productivity.

At a cost of GH¢4.9 million, the benefits are significantly higher, at GH¢178 million.

The researchers also studied the effects of nutrition-sensitive agriculture.

This initiative involves providing 174,000 households thirty to forty chickens, along with assistance and training in nutrition and gardening.

The intervention would bring long-lasting benefits in health and increased income for the families involved but would be much more expensive to implement.

Costing GH¢1,394 million, the benefits would range from GH¢1,823 to GH¢2,174, making this the least cost-effective nutrition intervention.

The proposed policies give a great argument for Ghana to spend more of its scarce resources on nutrition to improve life.

They certainly give the Ministry of Health, a great opportunity to showcase why the next budget should increase spending here.

Notes: All figures assume an eight per cent discount rate

The writers are the President of the Copenhagen Consensus and a lecturer at the University of Ghana, respectively