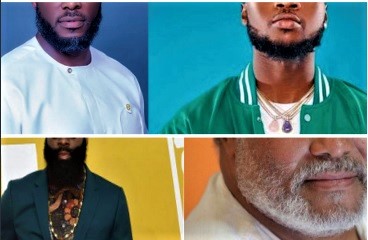 I used to pride myself on noticing new fashion trends quite quickly even if I am not myself among the most fashionable, but I certainly missed the start of something.

It appears full facial beards are very much the in thing with many young men these days.

On reflection, it is something that has been going on for quite a while and somehow I hadn’t taken notice.

I suspect it is more like one of those things that stare you in the face but you don’t really see.

Last week, I went to the customer service unit of the Lands Commission in Accra.

It was in a big hall and there were lots of young men among the members of the public there to conduct whatever business it is that takes people to the Lands Commission.

The first thing that struck me was how very outnumbered the females were in the crowd of people waiting to be served.

I wondered if that was an indication of the fact that when it came to land matters in this country, women usually don’t get much of a look in. Indeed, there are many tribes in which females cannot inherit land, but that is another story for another day.

On this day last week, I was in this hall and wondering about why there were so few females seeking the services of the Lands Commission and then it dawned on me that a substantial number of the young men in the hall were sporting fully grown and bushy beards.

For a moment, I thought they were all part of some religious group, but it soon became obvious that these were individuals on their separate missions.

I looked more carefully and noted that only two out of the maybe 30 young bearded men were dressed in what could be taken as Muslim attire and wore caps.

The beards were lush, uniformly bushy and trimmed from the hairline across the earlobe to the chins. They looked like fashion statements.

I have since discovered that I am embarrassingly late noticing this fashion trend.

Salim, who is my in-house authority on youth culture generally, language, fashion and beliefs cannot believe I don’t know about the Bearded Gang.

Everybody I have tried to mention my discovery to, tells me: “but this is so ancient”, which just goes to show how easily you lose track of the subtle cultural changes that take place without any big announcement.

I acknowledge, of course, that throughout the ages, beards have gone in and out of fashion.

But my reality had been and I had taken it for granted that once a boy reached puberty and started sprouting hairs on his chin, he was expected to shave the hairs on his face.

But now it appears it is no longer the obligatory thing for a young man in this country to shave first thing in the morning and to be clean shaven as he goes through his daily routine.

More and more young people are wearing bushy beards not for religious reasons but simply because they choose What is more, I understand there are lotions and potions on sale to help the growth of the beard to turn into the lush full face covered spectacles that we see.

I haven’t found out yet what sparked the beard growing trend, but one young man (clean-shaven at the moment) tells me the question I should ask is not why people are wearing beards, but rather why men have been made to shave throughout the ages.

According to this young man, shaving is not natural and must have started as one of those things designed to control society.

I can’t quite see that point but at the moment, I am more interested in working out how the beard wearing brigade managed to get beards to be acceptable across the board, without going on demonstration or starting a hashtag.

I don’t know if schools, for example, now accept that their students can stay on campus with beards. What on earth would have happened to that famous line in the school rules, “All boys must be clean shaven at all times.”

I remember someone at school who went to a lot of trouble to get a doctor to give him a medical report which stated that for medical reasons, he should be excused from shaving. He claimed that his skin was so sensitive it couldn’t take the daily shaving.

I must say that in those days, there were not many of the young men who wanted to be excused from shaving; it was after all, a rite of passage that showed you had joined the rank of grown men.

Plus, beards tended to invite a lot of uncomplimentary comments and you couldn’t hope to progress in some professions if you were a young man that wore a beard.

I wonder if the bankers, for example, have relaxed their ironclad rules that prevent any man in the banking hall that deals with the public from wearing a beard.

According to those rules, a bearded man was supposed to be not trustworthy and considered unsafe to leave your money with.

The multi-billion dollar shaving industry probably has something to do with the concerted effort to talk down beards.

It is an industry that depends for its survival on men going through the daily routine of the morning shave before they face the world and sometimes a second shave in the evening when there is a function and they want to present a fresh look.

It would be part of their marketing gambit to portray the clean-shaven man as the regular, sporty, upright man and the bearded man as the dodgy, slow and strange man.

It is interesting to note that when it comes to a judgement on attraction and good looks, there has been no definite finding on whether the female of the human species prefers the cleanshaven or the bearded man.

I have seen a writeup that claims in a 2015 finding that during times with a greater proportion of single men competing for fewer women, beards and moustaches become more fashionable.

In other words, the men believe beards to be an advantage among one another when hunting for mates.

Since the population census consistently shows that there are more females than men in our country, I wonder what we should make of the current rise in popularity of bearded men.

And how do people manage to go through life without aftershave perfume?

And what do you do when you are stuck finding a present for the man in your life?

It used to be a fancy electric shaver and an aftershave perfume was always welcome.