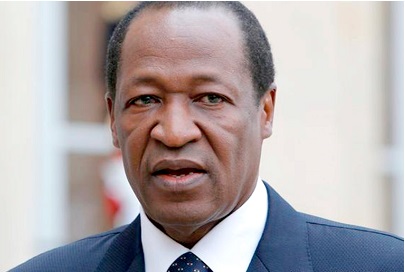 On April 6, 2022, a court trying former President of Burkina Faso Blaise Campaore in absentia, found him guilty and sentenced him to life imprisonment for murdering his friend Captain Thomas Sankara, the sitting President, in a coup d’état in 1987.

Campaore then installed himself President of Burkina Faso. After 27 years’ rule, he attempted to amend the Constitution to extend his stay.

That led to an uprising. In October 2014, Campaore fled to Cote d’Ivoire where he still lives.

The jubilation which met the court’s verdict was uproarious. Thirty-five years after the murder, an elated Mrs Sankara was among many Burkinabes who said justice had finally been done.

Interestingly, Sankara and Campaore are said to have jointly overthrown Maj Dr Jean-Baptiste Ouedrago in a coup in 1983, which made Sankara President.

“The arc of the moral universe might be long, but it still bends towards justice!”

In his famous August 28, 1963 speech “I have a dream” at the Jefferson Memorial, Washington DC, he had a dream of a future peaceful America where racism would be consigned to history!

Five years later on April 4, 1968, he was assassinated in Memphis, Tennessee.

Incidentally, the verdict on Campaore came on the heels of my recent April 2022 article Cross-over for water? which stated:

Sadly, in 1987, he was murdered in a coup d’etat, allegedly by his second-in-command and childhood friend Captain Blaise Campaore, who then installed himself as President.”

A quote attributed to Sankara is,“Choose between champagne for a few or drinking water for all!”

Thirty-five years after committing murder, justice has caught up with Campaore for killing Sankara. Immediately, questions started being asked.

• Was Sankara himself not a coup maker when together with Campaore, he ousted Head of State Maj Dr Jean-Baptiste Ouedrago in 1983?

• If no, what purpose will the verdict serve?

Some opine that, even if he is not extradited and dies in Cote d’Ivoire, the fact will still remain that, he was a convicted criminal.

In 1648, a revolutionary Colonel Oliver Cromwell staged what could be considered the first recorded coup d’état in modern history.

On January 30,1649, Oliver Cromwell, leading 58 others, tried and executed the king of England, King Charles 1.

Interestingly, while Campaore is considered the devil incarnate and perhaps the Oliver Cromwell of Burkina Faso, Sankara has been hailed as a Messiah for the changes he brought to his country although he did not come in through the ballot box, the symbol of democracy!

He came in through a palace coup in which he ousted President Maj Dr Ouedrago in 1983. Thereafter, he raised the level of education from six per cent to 20 per cent. He outlawed FGM and forced marriages.

Shakespeare said, “the evil that men do lives after them, the good is oft interred in their bones.”

In the England of 1648, which cherished the “Divine right of Kings,” Psalm 105:15 “Touch not my anointed and do my prophets no harm,” was an edict!

Oliver Cromwell’s overthrow and execution of King Charles 1 and his attempt to replace monarchy with a republic, was, therefore, seen as regicide.

After his death in 1658, his body was exhumed in 1661, tried and sentenced to death by decapitation. It is still not known where his head is!

In Burkina Faso, Campaore is seen as traitor who betrayed his country by murdering the nationalistic and Pan-Africanist Sankara.

By reversing Sankara’s policies, Campaore was seen as an agent of outsiders and not as one with Burkinabes at heart!

At a time when at the AU and ECOWAS, major rhetoric abounds on coup-makers in Mali, Guinea and Burkina Faso, elsewhere, major airports, institutions and roads are named after past coup-makers. Is this not what George Orwell calls “doublespeak?”

Does it not raise the question in Matthew 7: 5 of removing the plank/beam in one’s eyes before seeing clearly enough to ask others to remove the speck in their eyes?

Until we stop glorifying those who murdered Presidents like Campaore did to Sankara, and others far and near, pontification will be met with the ridicule it met in Guinea as hypocrisy.