Amidu has no case; neither does Jubilee House 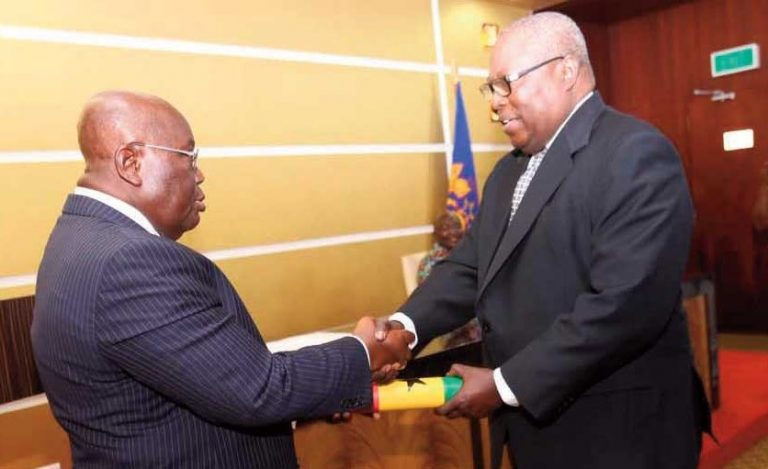 If I meet Martin Amidu in town, I will greet him, but not with a reverential bow, notwithstanding his anti-corruption campaign exploits in his pre-Special Prosecutor days.

In the first place, a fearless anti-corruption crusader should have deemed it a duty to give Ghanaians details of those “threats” and “traumatic experiences” to which he says he was subjected, since he presented his Agyapa Deal anti-corruption assessment report to President Nana Addo Dankwa Akufo-Addo.

In the second place, anti-crusaders and Special (independent) prosecutors are made of sterner stuff.

Many Ghanaians who advocated the setting up of the Office of Special Prosecutor (OSP) did so on the strength of examples, especially from the United States (US). We had followed and applauded the exploits of Archibald Cox Jr., the special prosecutor during the 1972-1974 Watergate scandal, and Kenneth Starr, the independent prosecutor who handled the Bill Clinton-Monica Lewinsky sex scandal.

Cox had a dramatic confrontation with Nixon when he subpoenaed the tapes the President had secretly recorded of his Oval Office conversations.

When the White House ordered him “to seek no further tapes or presidential materials”, Cox refused this direct Presidential order. Nixon fired him, but the firing set in motion the impeachment proceedings that ended with Nixon’s exit in ignominy.

Kenneth Starr’s 445-page report submitted to Congress formed the basis of Clinton’s impeachment by the House of Representatives.

I have no doubt Amidu knows these heroes of the law. The obstructions and frustrations placed in their way were legion.

And, let’s face it; apart from the discomfort of operating from a three-bedroom house and the delayed salaries, what were the “threats” and “traumatic experiences” Amidu suffered at the hands of the Executive?

Is it that Akufo-Addo asked him to hold on with his final report till he (Amidu) had read the written defence submitted by the Finance Minister in reply to his (Amidu’s) findings against him and Data Bank?

In this Ghanaian scenario, what spoils the matter for the President and Ken Ofori-Atta is that they are cousins. This fact introduces emotions and biases into our judgements. However, if we put the family variable aside for a minute, is there no principle in natural justice that dictates that before you crucify a criminal, you must first give him a hearing?

People who have described the judgment as political apparently do not know that Domelovo’s lawyer, Thaddeus Sory, pleaded with the court to be lenient in sentencing Domelovo. In the chaos of radio station noisy debates, many Ghanaians do not, and may never know this.

It seems to me, also, that amid the noise and our haste to pronounce judgment, especially on issues involving politicians, we, as the National Democratic Congress (NDC), the New Patriotic Party (NPP) or civil society people apparently have either forgotten or do not know about one observation of Martin Amidu in his Agyapa Deal risk assessment report.

He said in the report: “This is the first time an independent anti-corruption agency established by any Government in Ghana has undertaken an analysis of the risk of corruption and anti-corruption risk assessment of the processes leading up to the approval by Parliament of Public Agreements ... This has been made possible by the courage and commitment of the President of Ghana ... The President ensured that in the teeth of strong opposition, the Special Prosecutor was able to have his way to have included in the Office of the Special Prosecutor (Operations) Regulations, 2018 (L.I. 2374) the prevention of corruption regulations, which to the best of my knowledge may be the first in Africa and meets international standards and best practices.”

These are words by Amidu written after the gathering of evidence in his risk assessment investigation. Could the actions of the President, after Amidu submitted his report, been so fatal as to now turn him from an angel into a demon?

And he had not been paid all these years! His claim is vindicated in a letter dated Tuesday, November 17 from the Chief of Staff to inform Amidu that the President had directed that all his emoluments be paid to him. Unbelievable!

Was it because government was broke? Couldn’t it be? This government finds the money to pay nursing and teacher training allowances in an age when the supply of nurses and teachers outstrips the demand. Priorities, is the word.