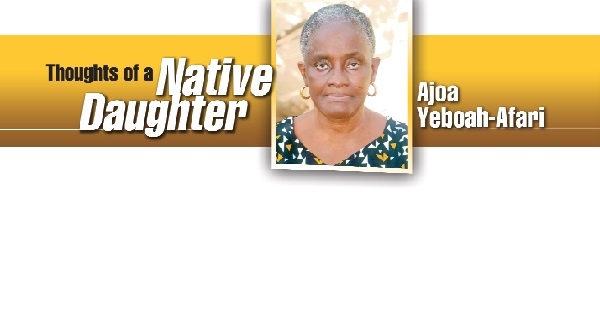 It’s a pity there’s no competition in Ghana for the filthiest gutters, because I believe that some of the examples from Dansoman Estate, in Accra, would certainly be among the first prize nominees, if not the undisputed winners.

Is it that Ghanaians are dirty by nature? Certainly not! But probably that is a question visitors to our shores ask themselves, seeing the state of most of our gutters, rubbish heaps and city environs; the careless attitude to litter of Accra folk.

Yet, ours is a centuries-old tradition of women and children waking up at the crack of dawn to sweep the compound, rooms and around the house, before beginning the rest of the day’s chores.

But apparently that culture was only in villages and towns, alien to city life. City dwellers expect the government to do everything.

Dansoman, a one-time showpiece housing estate, especially during the administration of General Kutu Acheampong, and once even reputed to be the biggest residential estate in West Africa, is not a suburb where one expects to find choked, disgusting gutters. Yet, Dansoman has become one more illustration of Accra and Ghana’s sanitation migraine.

Strangely, the Government’s plan to introduce a Sanitation Levy, a modest sum is, reportedly, being opposed by some people. However, some of us have been campaigning for ages for a creative approach to solving the country’s sanitation challenges, urging “new thinking and more pragmatic measures”.

“Instead of people having to pay directly for garbage collection, a modest charge should be added to other services that people pay for, in order to raise money for rubbish disposal.”

A Sanitation and Pollution Levy (SPL), aimed at raising funds to tackle the country’s sanitation problems, was announced in the 2021 Budget on Friday, March 12, 2021, presented by Minister of Parliamentary Affairs Osei Kyei-Mensah-Bonsu, on behalf of Finance Minister Mr. Ken Ofori-Atta, who was on sick leave.

“(To) ensure sustainable sanitation management, (and) provide the requisite resources to address these challenges and fund these activities, the Government is proposing a Sanitation and Pollution Levy (SPL) of 10 pesewas on the price per litre of petrol/diesel under the Energy Sector Levies Act

Among the SPL’s 10 action points he listed, one that is of special interest to me is “Construct more sanitation facilities to accelerate the elimination of open defecation.”

Nevertheless, I have one regret: the omission of a programme to extend taps to homes as part of the general ‘clean Ghana’ agenda. Access to water is undoubtedly essential to cleanliness and good health. Therefore, it’s a great pity that successive governments have paid little attention to the need to have household taps to replace communal taps.

In my opinion, the current Government policy of having a toilet in every home should be partnered by a similar scheme of having tap water available in homes throughout the country.

As I suggested in this space in 2014, long before COVID-19 and the pandemic safety protocols:

“If hand-washing with soap and running water is deemed vital for fighting disease, why is it that access to safe water is still a dream for masses of Ghanaians?

“Also, the concentration seems to have been on communal standpipes. There has been little or no interest in connecting water to homes to make the directive meaningful when people are told to wash hands often and under running water and with soap.

“The issue is, even if people have soap, how are they to observe the hand-washing- with- running-water advice if they have no access to taps or safe water?

“But I believe that it is because fetching water for family use is usually a chore for women and children that the national focus has never been on connecting water to homes. If our men had to fetch water for the household, probably the need to have taps in homes would have been seen as non-negotiable.

“A new era of taps in homes should begin. Ways should be found to provide at least one tap in each house.

“If the argument is that extending taps to poor households would be too costly, what about the costs the government inevitably incurs when unsafe water leads to epidemics? Are epidemics more affordable?” (Column of August 22, 2014, ‘Of invitations not refused and response plans’.)

Greater Accra Regional Minister Mr. Henry Quartey has launched an admirable initiative with the simple but catchy slogan of ‘Let's make Accra work’. Conceivably, once the capital city is working, is in great shape, the rest of Ghana, too, will have a role model to emulate.

Continuing with the Dansoman situation, it is now fast losing its prestige, the state of its gutters being an indicator. The gutters along its main thoroughfare, the Gen Acheampong High Street, must be among the most stomach-churning of Accra’s choked gutters, notably the one close to the banking enclave at the area of Dansoman known as ‘Sahara’ – despite the importance of that place as a mini financial zone.

Interestingly, recently, I noticed that the gutter there had been covered with cement slabs. Yet, through the slab openings, one could see that it was still disgustingly clogged up with refuse and plastic waste.

It’s encouraging that apparently the state of that gutter is at long last a concern to somebody, but I wonder why they didn’t get the rubbish cleared before putting on the slabs.

What we need is comprehensive, pragmatic, creative problem-solving, not half measures.

On the subject of ideas, President Nana Akufo-Addo’s Government has acquired a high reputation for the imaginative, realistic innovations being introduced to make Ghana work. Therefore, I suggest again that while access to potable water is being expanded, it should not be the same old policy of public or community standpipes.

Ghana should now advance to ‘Operation Household Taps: A Priority!’