Fleeced in Affollabi; how over 100 Ghanaians were taken hostage in an online retail scam 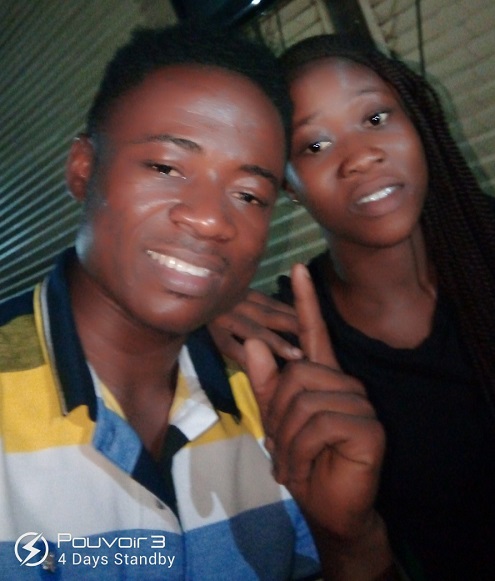 Twene with the criminal ring leader at a Drinking Spot in Affollabi Community in Nigeria
30.5k Shares

"When I was whisked off from a self-contained apartment at Affollabi community, Lagos, Nigeria where instructions are given to hostages on how to do an online marketing business, later I was driven off to a big pink mansion with several rooms.

That place will be my home. In the room, I saw many people sitting, " Isaac Twene, the survivor narrated.

"I met an elderly man from Bawku, Ghana who wore a sad countenance. He had been let off to a wrong place and not to South Africa as he dreamed, " he continued.

Social media influence and how he landed in Nigeria

As a student of University of Education, Winneba (UEW), Twene, was sent to do an attachment at Goka Senior High Technical School in the Jaman North District in the Bono Region in 2018 as part of his course. While there, he met Dorothy Kyerema, 19, his first contact person in the scam who was one of the students he taught in the school. The two had developed strong interest and affection for each other.Their friendship and relationship grew with time.

In 2019, he proceeded to do his internship as a teacher at the Dormaa Senior High School. One time he had met her again in town and she took his number. Few months later, she started chatting him on Whatsapp pretending she was in South Africa working at an Airport Canteen at a Cape Town Hotel.

What made him to believe she was residing in South Africa was that she had solicited others support to create a fake sim card bearing the South African code (27) which clearly showed on the chats with him.

Conversations with him had deliberately centred around seemingly lucrative low skilled job opportunities in South Africa designed to feign his interest.

"Some of them include shipping work, shop attendants, cleaners and distributors, distributors, mall work. She asked me to send my personal information and other details to begin processing for my employment at the hotel.

But when I did i got a reply from a Nigerian agent with a phone number bearing the code(+234), " he stated.

"I asked why a Nigerian agent would reply to a transaction meant for South Africa. Her explanation was that the business was based in South Africa but belonged to a Nigerian who was processing documents including passport for employment in that country, " the survivor added.

She later prompted him to get an amount of GH¢8,000, the equivalent of $5000 for the flight to South Africa when he had no passport. To arouse in him an enthusiasm, an interest,  a drive and an eagerness to find the money and make the deal work, she assured him she was going to add an extra GH¢2,000 to the money and meet him in Nigeria.

Finding the money for the journey became a big hurdle for him. After asking for help around and without much success, he went to see a family in Dormaa Ahenkro who lent him the amount.

On September 5, a Nigerian agent was despatched to meet him at Circle, where they bought a bus ticket at Amadel Transport Company. In the company of three other travellers, and without any particular reason the agent led them from Circle to Tudu Station where they boarded a bus to Aflao Station. Then later to the Togo - Benin border.

At some point, their movement and transportation were conducted on motor bicycle through illegal routes due to closure of the borders as a result of covid restrictions, and in a bus when he had to pay bribe to immigration officials to allow them passage.

Wearing of nose masks was optional and a matter of choice for the travellers and the people at the borders rather than a rule that had to be strictly followed.

In Benin waters on board a boat, they had sailed to Maza Maza Bus Stop, Nigeria, meeting navy officials on sea who became highly suspicious of them and will instruct them to lift hands up to be sure they were not wielding guns or terrorists.

After three hours from Benin they landed in Maza Maza Bus Stop, Nigeria. He became very hungry while waiting for her for a long time to arrive and pick him up.

When she arrived on the scene, they proceeded to a self-contained apartment with a fence wall meant to be the convergence point for those who were recruited for the online network marketing scam.

The room was in poor condition. There were cobwebs at the ceiling. People in there looked shabbily dress, he became alarmed. They stared at him when he entered. He was hurriedly led to the manager's room where he was briefed about the online network marketing operations. The manager told him it was a watch selling business that owned a university. But no documents proved their activities were legal.

"Later I was led into a hall. I heard some people numbering more than 100, some Ivorians, shouting in a different language with interpretation by another person. There was a white marker board, for illustration, teaching and indoctrinating people held hostage. Some welcomed me speaking Twi, a language spoken by the Akan people of Ghana, and asked me to be patient, " he added.

When it was getting late, he was led into a very big pink multiple storey mansion few distance away to spend the rest of the night. There were numerous others in the building with many mattresses on the floor. When he woke up the next day, he went straight up to the ring lady and confronted her with questions about the deal. Twene had several heated verbal exchanges with her and the other leaders - there was vehement disagreement and misunderstanding.

He had enquired from her why they lived in an obscure and secluded area. It was a sprawling community surrounded with a thick forest with poor security. There were lots of mosquitoes in the building and no health centre to take care of any person in time of indisposition. Additionally, his movements were restricted, he did not possess certain vital documents to make his movements easy.

The next day he returned to the self-contained apartment where he received detailed instructions and strategies on how he could engage and defraud 150 more people into the camp in Nigeria, just like how he was tricked. The grades, promotion, levels he would reach using all his contacts including those on Facebook, and the dollar accounts that will be opened in his name were made available to him. These were all designed to buy his mind, heart, his will and time into the scam.

They allowed him back to Ghana when he assured them he would work to recruit others and bring them to the camp on his return.

Ghana and Nigeria have enjoyed good relations over the years but recent developments on trade have threatened to ruin this historical bonding between the two states. The trade war has gained the intervention of all relevant, key stakeholders notably the Ghana Union of Traders Association (GUTA), the Nigerian community and the regional economic bloc, Economic Community of West African States (ECOWAS), but it appears solutions are yet to be reached.

Aside from Accra, the national capital, it has spread like a wild fire to Kumasi and Dormaa, a migration-prone community, on the list of third places in the Bono Region with high incidence of irregular migration. The International Organisation for Migration  (IOM), Ghana, says in 2017, over 1,800 returnees were supported to voluntarily return to Ghana.

Alhaji Irbard Ibrahim, International Relations Expert, describes as sad the numerous tale of human trafficking cases taking place across the West African sub-region noting this should serve as a wake-up call to the youth to be vigilant about who to trust when there were promises of travel opportunities to seek for greener pastures.

He made a recommendation to GUTA and Africa Continental Trade (Afcta) to intervene to address these forms of trade issues between Ghana and Nigeria to enhance bilateral ties between these two sister nations.

Mr John Morcher, the Commander, Migration Information Centre, observed that traffickers fall on the blind side of immigration officials to sneak people through the borders at night. He adds that there were plans to recruit more officers into the immigration service and equip them adequately to carry out night patrols. Twene is yet to report the matter officially to the Police. All efforts to reach the Police for comments has proved unsuccessful.