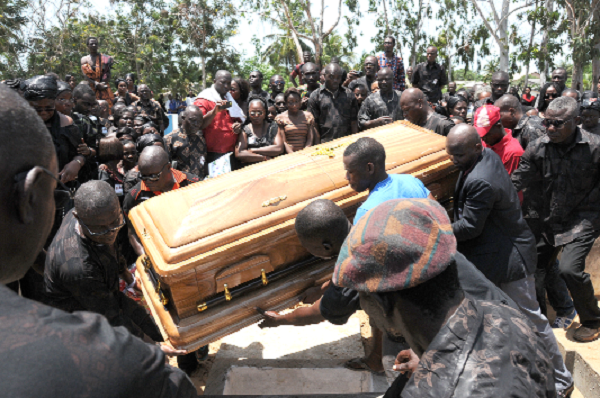 Saturday, March 12, 2022 was a significant day for me as it was the birthday of three of my friends. When I called my colleague General to sing the “Happy Birthday” song, he was on his way to Aburi for a funeral.

Happily, I sang the birthday song for all three with back-up vocals from my “Manager” whose voice sounded more alto than the treble/soprano I would have preferred to back my baritone!

A fortnight earlier at a funeral, a friend accosted me saying, “Dan, you must write an article on funerals! We waste too much time and money on them!”

Knowing how controversial this topic could be, and where it could land me, I told him, “Please, lead me not into temptation, for I can find it myself!”

We both laughed after which I told him of a radio programme I had listened to during the week on funerals, described as an important part of our “culture!”
Before delving into what the chief said, I shared my Kenyan experience on funerals with him.

He called his friend Ambassador Bethuel Kiplagat, Kenya’s top diplomat and probably the equivalent of our HE Kofi Annan, to inform him about my appointment.
Within a week of my arrival in Kenya, Ambassador Kiplagat visited me to welcome me. Indeed, he was the Patron of APSTA!

My joy of enjoying the support of such a distinguished personality unfortunately vanished when Ambassador Kiplagat died at 81 before I could settle down.

After a week, going by Ghanaian practice, I asked my secretary to organise a visit to Ambassador Kiplagat’s residence for me to commiserate with his family. Smiling, she said “Sir, he was buried yesterday!”

When she saw the surprise look on my face, she added “Sir, here in Kenya, we bury our dead in a week. Where children overseas have to fly down, the funeral is postponed by another week, but certainly not beyond two weeks!”

In his opening remarks, the chief’s statement that the funeral industry is “very good’ for Ghana in that, it provides employment, caught me flat-footed!

He opined that funerals provide work for many “professionals!”

Starting with Funeral Homes/Morticians and the coffin makers, the chief went through the whole funeral industry “value-chain.”

Once the coffin maker finishes the “box,” the shroud/costume is done by a dressmaker for the deceased.
Printers and décor-makers get busy! Buildings get repainted!

He continued with caterers/ “chop-bar” owners who provide food, together with drinks by “beer bar” owners. Since Ghanaians will always make new clothes for funerals, textiles manufacturers benefit from the funeral industry.

Musicians and transport owners also feature prominently during funerals. Then come the “professional cryers” who cry beautifully to generate the appropriate sad atmosphere for funerals.

Churches and event centres are not left out!

In recent times, there is a squad of young men “pall-bearers” uniquely attired in black-suits, white shirt and black ties, sometimes with black hats, who carry the coffin. Finally, there are the grave-diggers who complete the chain!

So, to the chief, the funeral industry feeds positively into Ghana’s economy.

Incidentally, our eastern neighbour Togo treats funerals with the same simplicity/decency that the Kenyans do.

There is minimum expenditure of money, time and other resources in seeing off their dead, albeit no less dignifying.

So, how come our psychology of “funeral-sophistication” appears to be growing exponentially?

For some families in the villages, funerals present the opportunity to extract from city-dwellers the perceived millions of cedis they make as “government workers.”

Young men/women starting life are forced to take funeral-loans to bury their parents in the village because the family-head dictates sophistication.
Meanwhile, his contribution to the funeral expenditure is zero.

As I told my friend who asked me to write on funerals in Ghana, “lead me not into temptation”!

Like religion and partisan-politics, funerals constitute an aspect of life one cannot subject to logic. With rational analysis in such discourses impossible, it is unwise to venture into any debate as one is likely to come out badly bruised, no matter the stance!

However, the old saying, “cut your coat according to the size of your cloth” is still valid! While it is desirable to see off loved ones decently, it does not justify extravagant show of lavishness of “befitting-funerals” to please society, only to be followed by silent pain, anguish and tears.

Let us spend on the living! May the souls of the faithfully departed Rest-In-Peace!