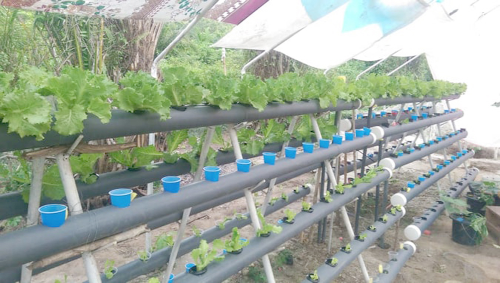 Farming is unattractive to Ghanaian youth because they do not think it has any prospects. COVID-19 has brought in its wake the new normal with masks, social distancing and lockdowns. With the lockdowns, people are now entertaining thoughts of growing their crops and vegetables at home themselves.

Hydroponic farming, thus, is a farming method where greens are grown organically without soil but with nutrients and 90 per cent less water.

Spurred on by his own fascination for hydroponics, a 38-year-old IT specialist, Richard Agyapong-Dadzie, after learning about the method, has started training farmers on the hydroponics technology to spread the message of “grow what you eat”, particularly among the youth. He also states his other aim as encouraging more people to grow their own food.

He says the aim is to encourage more people to grow their own food at home.

According to him, hydroponics would be very important in the future considering the population shift towards apartment lifestyle.

“In future, we will have lesser access to good soil, most of which is already polluted due to the use of pesticides,” he said.

Richard had no initial knowledge of hydroponics; he started by sprouting seeds and putting the roots in water after observing the Water Lilly; that was how he began his hydroponics.

“I studied Information Technology at the university. I had lofty dreams like any other graduate, apart from my interest in agriculture and a lesson from food poisoning by pesticides. I, therefore, decided to look for options to grow food without soil,” he said.

“It was while I was experimenting that I discovered that there was something known as hydroponics, so I decided to enrol in an online course to study the technology, and I am still practising it as a hobby at home,” he added.

Richard’s motivation in studying hydroponics was to enable him to contribute to the hydroponics sector in the country and train others in the technology.

As fate would have it, fortune smiled on him when he received funding from a friend to start his own semi-commercial hydroponics at Adukrom, near Cape Coast.

Though on a small scale, his hydroponics farm is the talk of his community at Adukrom.

According to the young farmer, most indoor hydroponic farmers could derive greater profit without extensive capital outlay.

He said for home construction, one might need only a minimum of GH¢100 to start a “Do It Yourself” (DIY) system, while for the conventional system, one would require GH¢220 to GH¢500 for the setup.

He added that hydroponics required minimal labour as the cost of weeding was completely eliminated.

“Hydroponic systems, regardless of what structure they are used in, are 60 per cent more profitable,” he said.

Currently, Richard has trained more than 500 farmers to start their own hydroponic projects at home and hopes to spread the technology across the country for free to minimise the degradation of lands and forests in modern agriculture.

He expressed the hope to fully digitalise hydroponics in Ghana for farmers to manage their farms from remote locations.

Meanwhile, his organisation, Ridolf Hydroponics, is in partnership with Apes-10, a biotech company, to develop different kinds of hydroponic systems to make food production through hydroponics sustainable.

The Food and Agriculture Organisation (FAO) estimates that by the year 2050, the world will need to increase its food production by 50 per cent to feed 9.3 billion people.

The goal cannot be achieved if land is lost to construction, mining and other such activities.

Hydroponics is the best option that allows society to minimise the use of space for food production.

According to MarketsandMarkets, a marketing research company, the global hydroponics market was estimated to grow from $8.1 billion in 2019 to $16.0 billion by 2025.

Even if the country assumes a meagre 0.5 per cent of this overall market translating into hydroponic method, there will be humongous opportunities.

The government needs to support the system of farming to achieve the UN Sustainable Development Goal which talks about decent work and economic development.