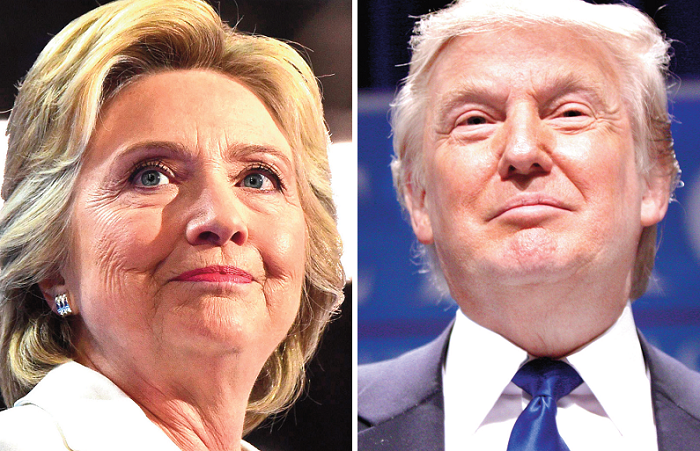 Hillary Clinton is on the cusp of history as the first female President of the United States, and the Donald ain’t stopping her, especially if proceedings from the third and final presidential debates are anything to go by!

Hillary appeared better prepared, had better counters, did a better job of showing how different her proposals were, succeeded in putting the Donald on the defensive, and was generally the more presidential. My main challenge with the Donald on the night, and I had not earlier realised how serious this challenge was, was my uncertainty regarding where reality ended and fiction began in the Trump world of facts. A reading of post-debate fact check by various analysts amplifies the root cause of my challenge.

After the debate,  Cable News Network (CNN) fact checked various statements made by both candidates on the Supreme Court, Immigration, Syrian refugees, Guns, Nuclear proliferation, Abortion, Clinton's State Department, Russian hacking, Jobs, Trump's accusers, Taxes, Trump Foundation, North Atlantic Treaty Organisation(NATO) and Debt. CNN then rated selected key statements from both candidates as “true; mostly true; true, but misleading; false; or it's complicated.” On the basis of this fact check, the Donald’s record on false statements is outstanding, comparatively. Trump made as many as 10 false statements compared to two by Clinton.

Take the example of Trump’s claim that under Clinton’s watch as the Secretary of State, six billion dollars simply disappeared from government coffers, a statement proven by the CNN fact check to be patently false. CNN issued a false verdict because, “The man in charge of the same office that issued the management alert said the conclusion that $6 billion was lost is false. Rather, the State Department misplaced important documents related to valuable contracts.”

The debate itself was fascinating to watch. Hillary proved highly skilled at baiting the Donald, pivoting when under attack, and turning defense into attack and leaving the Donald on the defense instead. In one instance, she even succeeded in baiting the moderator to open a line of questioning into her area of comfort. This was on the issue of WikiLeaks, a hot issue that prior to the debate, most people had assumed the Donald will floor Clinton on.

So moderator Chris Wallace took Clinton on over a statement made in one of her high profile speeches to corporate America, subsequently leaked by WikiLeaks, in which in contrast to Trump’s proposed border wall, she reportedly talked about “Open border.” “You had the uncomfortable sense of foreboding that a can of WikiLeaks’ worms was about to open.” But this is where Clinton showed great pivoting skills.

Clinton acknowledged the statement, but pointed out that further reading would show that her use of “Open borders” was in reference to aligning energy interests of the United States to those of other countries across borders. She then focused her attention on the source of the information – WikiLeaks! Clinton pointed out that what was actually important about the WikiLeaks releases was what it represented; a cyber attack against the United States (US) sponsored from the highest levels of the Russian government in an attempt to influence the US election. And this is according to 17 US intelligence agencies.  In her estimation, the most important question of the evening was whether Donald Trump would condemn the actions of the Russian government and make it clear that he would not have the help of Putin in this election. Pressure now on Trump!

Here, although the Donald recognised that Clinton was leading him astray, he still went for the bait, finding it necessary to be on the defensive about his relationship or non-relationship with Putin who he subsequently claimed had absolutely no respect for either Obama or Clinton.

This, of course, started some very testy exchanges between Clinton and the Donald, with Clinton saying the reason Putin may not be so enamoured of her and Obama was because “Putin would rather have a puppet as President of the United States.” Trump took to strenuously denying the Putin puppet label. Of course by the end of the testy exchanges, Clinton was accusing Trump of encouraging espionage against the US, an apparently unthinkable crime by a US President! In the end, Chris Wallace could not help joining in, asking whether in fact Trump would not condemn any attempt by external agents to influence the election.

The ultimate effect of all these exchanges was that there was no further opportunity to scrutinise the actual content of the WikiLeaks information to the potential embarrassment of Clinton, while putting Trump on the defensive. Not bad at all, Secretary Clinton!

this was however, not the only testy exchange. Tackling Clinton’s leadership credentials, the Donald lambasted Clinton for having the wrong kind of leadership experience. In his words, “The only thing you have over me is experience but you have bad experience… you talk but you don’t get anything done. You run the state department and allowed six billion dollars to get lost …” As this attack unfolded, Clinton watched calmly with the slightest hint of a smile. As her own response was subsequently delivered, it became obvious why. She provided what virtually amounted to a response that might as well have been prepared in advance in precise expectation of this type of attack. She was that good as she waxed eloquently, contrasting her experience to that of the Donald.

“Back in the 1970s, while I worked for the Children’s defence fund and I fought against discrimination against African-American kids in schools, he was getting sued by the justice department for discrimination in his apartments. In the 1980s, while I was working to reform the schools in Arkansas, he was borrowing 14 million dollars from his father to start his businesses. In the 1990s I went to Beijing and I said, ‘women’s rights are human rights’ , he was insulting a former Miss Universe, Alicia Machado, called her an eating machine and on the day when I was in the situation room, monitoring the raid that brought Osama bin Laden to justice, he was hosting the celebrity apprentice, so I am happy to compare my 30 years, what I have done for this country, trying to help in every way I could, especially kids and families, get ahead and stay ahead with your 30 years and I will let the American people make that decision.”

I know the focus of the international media so far has been on the Donald’s unpreparedness to concede the results of the election. As an African, long used to Americans calling for credible elections in Africa, calling on candidates to gracefully accept the will of the people, I am roundly amused. I hereby appeal to Secretary Clinton and Mr Trump to accept and respect the will of Americans in the same way the US preaches to us. Hopefully, the Donald will not emulate bad examples and take to an armed guerilla warfare in the bushes of America. Ghana’s democracy has long fled these crude tactics, including violent rallies, and may have a lesson or two to share with our friends across!