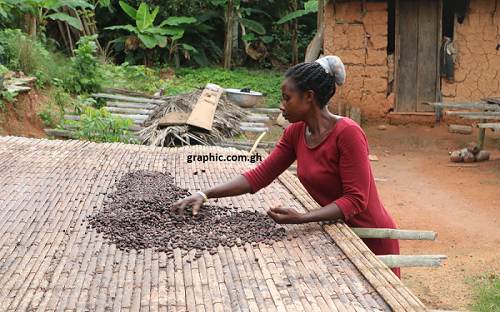 Ghana is one of the world’s major cocoa producers and for many years, cocoa production has been the backbone of Ghana’s economy, raking in several millions of dollars in foreign exchange annually.

The sector is also very critical in job creation, particularly for the rural dwellers who are into cocoa farming and other value-chain activities.

According to COCOBOD, the agency responsible for Ghana’s cocoa industry, the sector employs approximately 800,000 farm families across the country’s cocoa growing areas, and contributes about US$2 billion in foreign exchange annually to Ghana’s Gross Domestic Product (GDP).

As a result of the critical nature of the cocoa sector to Ghana’s economy, the Ghana government over the years has invested so much into the cocoa sector with the hope of enhancing production and boosting the incomes of cocoa farmers.

However, in spite of the huge investments that government continue to make in the cocoa sector, cocoa production in the country continues to decline and the reasons are many.

Some of the reasons for the declining state of Ghana’s cocoa production are low producer price, decrease in areas under cultivation, non-compliance with standard farm practices, incidence of pests and diseases, and low yields per hectare, as well as land degradation by illegal miners (galamsey) operators.

Even though it is true that the above mentioned factors all contribute in one way or the other to the declining state of Ghana’s cocoa production, one issue which often escapes mention is the welfare of cocoa farmers.

The welfare of cocoa farmers and cocoa production goes hand-in-hand. This is because there cannot be any meaningful growth in the cocoa sector if the players (farmers) themselves are not in good shape. When the cocoa farmer is happy and well-resourced, it will have direct impact on his output, hence when cocoa farmers are not in the right frame of condition, the output can be affected negatively.

Some of these poor cocoa farmers sometimes out of frustration, sell their cocoa farms to illegal miners (galamseyers) for their farms to be mined for gold in order to get money for their upkeep and other family responsibilities.

This is why perhaps, the framers of the very act that established COCOBOD mandated the agency to establish a farmers’ welfare fund to cater for some of these challenges cocoa farmers face in the country. But for so many years, the fund had not been established.

The Farmers’ Welfare Fund would help provide some sort of financial reliefs to the poor cocoa farmers and their families as a form of Social Security Scheme.

Until recently that President President Akufo-Addo launched the cocoa pensions scheme on December 2, 2020, which has been on the drawing board since 1984, the Ghana Agricultural and Rural Development Journalists Association (GARDJA), is one of the NGOs in Ghana that has been very vocal about the establishment of the Farmers’ Welfare Fund.

The Deputy General Secretary of the association, Mr Joseph Opoku Gakpo, on Thursday, August 27, 2020, noted that the establishment of the Farmers’ Welfare Fund would help to transform the lives of many cocoa farmers in the country.

He was of the view that the Farmers’ Welfare Fund would, among other things, provide the opportunity for cocoa farmers to access financial credit with flexible terms of payment.

He explained that due to hardships, many cocoa farmers mortgaged their farmers to individuals in order to get some financial assistance, a situation he said, the Farmers’ Welfare Fund could have prevented.

Although the scheme is anticipated to benefit about 1.5 million cocoa farmers in the country, cocoa farmers such as Kwame Annan and Opanying Esilfi all at Assin Fomaya in the Central Region, are not too sure if it will be properly done to benefit cocoa farmers.

For them, until they see the full implementation of the project, they cannot trust COCOBOD since this is not the first time they are hearing that they (COCOBOD) wants to do something for cocoa farmers.

Kwame Annan believe that when properly implemented, the Farmers’ Welfare Fund will help many poverty stricken cocoa farmers to come out of their abject poverty.

The Chief Executive Officer (CEO) of COCOBOD, Mr Joseph Boahen Aidoo, at the launch of the cocoa pension scheme pointed out that the scheme would provide a solid future for cocoa farmers, most of whom were now overage.

Under the policy, he explained, farmers would be paid compensation of GH¢1,000 per acre and would be helped to replant their farms with improved cocoa seedlings and inter-planted with plantain as an alternative livelihood.