Ex-WO1 Hammond: I will kill my mother if the state thinks so 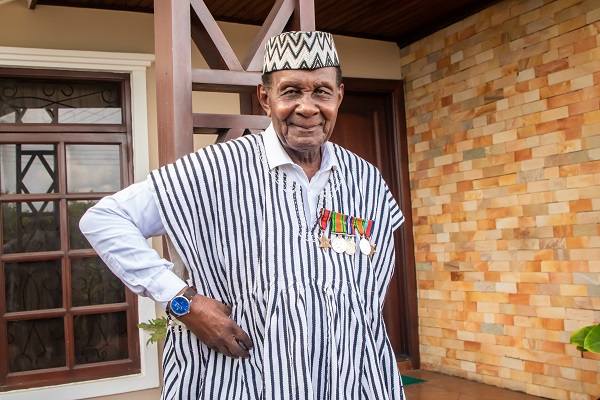 Ex-WO1 Joseph Ashitey Hammond looks back with pride after serving society over the years as a soldier
30.5k Shares

Ex-Warrant Officer Class One (WO1) Joseph Ashitey Hammond looks back with pride after serving society for decades as a soldier.

He was a brave heart who was ready to risk his life in the fight for justice and in defence of his creed, even if faced with the difficult choice of killing his own mother if instructed to.

Old soldiers, they say, never die and so has it been for 95-year-old WO1 Hammond, a member of the Gold Coast Regiment who is currently the only known survivor of the historic 28th February Crossroad incident that claimed the lives of Sergeant Adjetey, Corporal Attipoe and Private Odartey Lamptey — a landmark moment in Ghana's struggle for independence.

A few years away from joining the exclusive class of Centenarians, the retired Ghanaian soldier is still blessed with good health, strong retentive memory and clarity of vision.

And many decades after dutifully serving society, including putting his life on the line during World War II, he still found motivation in Captain Sir Thomas Moore’s incredible fundraising achievements in the UK last year to support the vulnerable run-up to his 100th birthday during the COVID-19 pandemic.

Ex-WOI Hammond's heroics know no bounds. Last year the nonagenarian took up his own challenge by walking 23km over seven days to raise about £600,000 for frontline workers supporting the COVID-19 relief effort and vulnerable veterans across Africa.

At the age of 95 years, he walked for about 3.2 kilometres a day to raise funds and also presented boxes of disposable face masks, hand sanitiser and drinking water to frontline health workers in the country.

His endeavour caught the attention of Ghanaians, including President Nana Addo Dankwa Akufo-Addo, Commander-in-Chief of the Ghana Armed Forces, who in July 2020 promoted then Private Joseph Ashitey Hammond to the rank of Warrant Officer Class One (WO1) in recognition of his patriotic exploits and continuous service to the nation.

Recognition also came from the Queen of Britain who conferred on him the “Commonwealth Points of Light Award” with his residence at Osu, a suburb of Accra, hosting the British Deputy High Commissioner to Ghana, Thomas Hartley, and the British defence attaché to Ghana, Lieutenant Colonel Alastair Mckechnie, who delivered the award and a handwritten letter from Prince Charles, the Prince of Wales and heir apparent to the British throne.

Last week when The Mirror visited WO1 Hammond at his residence ahead of his 96th birthday on May 10, the old soldier looked very energetic and smart and read magazines without the aid of reading glasses.

One striking thing was that the veteran loves to look good and paid attention to his surroundings.

He was wearing a black and white smock with five service medals pinned on it.

Ex-WOI Hammond surely takes pride in his accomplishments in the military. He took the team on a sentimental journey from living in the Gold Coast to the present while describing the many awards and citations displayed in his living room.

Life of WO1 Hammond

An engineer by profession and an occupant of the Teshie stool in Accra, WO1 Hammond was born and raised at Osu by his father, Mr Peter Abraham Hammond and mother, Ms Felicia Adoley Mingle, daughter of the Sempe Chief in Accra (both deceased).

Two decades ago, he lost his wife, Ms Bernice Awo Mensah, who hails from Anyako in the Volta Region, with whom he had five children. He remarried and had two more children.

As a child, young Joseph always had the desire to join the army. Therefore, at age 16, he got enlisted as a driver mechanic straight from school after passing a simple interview where he was asked if he would kill his mother if asked to undertake that difficult task.

“My answer to the question was straightforward, I told them if the state thinks she should be killed I will do just that.

The whiteman then tapped my shoulder for my bravery. I joined the army on July 31, 1943 and I went through my mechanical training. After my training, I was posted to Third Advanced Based Workshops in Takoradi, in the Western Region.”

“In November 1943, we were drafted to go to the war. They said they needed the best soldiers from our unit, so 10 of us were drafted. About a week later, all 10 of us were taken to the Takoradi Harbour. We saw a very huge ship, HMS Circassia, with 2,500 troops on board and on its way to India.

“I was in the 82nd. The 81st were trained earlier so they had to start fighting the Japanese to push them. They went in for six months and then we joined them at Buthidaung in Burma. The fight against the Japanese forces was far more ferocious and brutal than the war against German and Italian forces in Europe,” Ex-WO1 Hammond stated.

“If a Japanese soldier is captured in the war, as a war prisoner, he has disgraced his family. But when you die it’s an honour to your family - this was their mentality."

The veteran recounted how the war brought a lot of fatalities with its attendant shortage of food and water.

“We had to drink water from rivers that had dead bodies floating on them. You find your colleagues or blood brother killed and you don’t have to show any emotion but keep fighting the enemy.”

In the course of the war during intense fighting, he realised he was injured in his left eye.

“Unfortunately, I realised that my eye was protruding. I didn’t know what happened. I was flown by plane with two wounded people to India, Pune city where soldiers were being treated for their injuries.”

“My specialist Lieutenant Crockett, the eye specialist, told me my sickness was caused by contaminated blood.

Somebody was wounded and maybe I touched the person and the blood may have touched my face reason for the infection.”

Unfortunately, because of his illness, he stayed in the hospital in India until the end of the war in August 1945.

After the war, he returned home to the Gold Coast with his fellow surviving soldiers.

“I feel very proud today that I also defended the British Empire. We fought ferociously, we fought very well against the Japanese and we conquered them. And I’m happy that I took part in it. I Joseph Hammond, I also took part and I feel very proud I contributed a lot during the war," he said proudly.

Recounting the February Crossroad incident to he said he was an eyewitness and participant of that peaceful protest march by unarmed ex-servicemen who were agitating for their benefits as veterans of World War II, which was broken up by police, leaving three leaders of the group dead.

“We were promised pensions and jobs after the war; however, when we returned home, jobs were scarce and our pensions were never disbursed to date.”

He said the 28th February incident is considered as the straw that broke the camel's back, marking the beginning of the process of the Gold Coast towards being the first African colony to achieve independence on March 6, 1957.

As an engineer, he constructed the tarmacs at the Independence Square in Accra, did some of the linking roads from Labone to Kofi Baako Junction and Cantonments. He also played a role in the construction of the El Wak Sports Stadium in Accra.

“The inspection of the building of El Wak was done by late Air Marshall Otu, Colonel Simpe Asante; Colonel Victor Coker-Appiah and Colonel Koomson of the Garrison Engineers.”

Currently, all he wishes for himself is to support the destitute and other veterans with his Hammond Foundation.