Elizabeth Ohene writes: They do it better abroad

A week ago, the former Kenyan President Daniel arap Moi was laid to rest at his Kabarak home. Many things came to mind when the news came that the 95-year-old had died.

Were the obituaries going to talk about the “disgraced former dictator” or were the Kenyans going to speak no ill of the dead and send home the conquering hero who had ruled them for 24 years?

The current President, Uhuru Kenyatta, set the tone quickly with the announcement of the death: “One of Africa’s greatest, a man who made his nation and the continent immeasurably better”. The rest of the nation followed suit. One television anchor announced: “Today, Kenya, Africa and the world is mourning.”

But it was not really the total rehabilitation of reputations that comes with death that I found the most striking; we do that here in Ghana regularly. What impressed me the most was how long it took to organise and lay the former President to rest.

These days, the news of death is likely to be published as soon as it occurs, but there is something called a formal announcement that might not happen for months.

So, here is how the arrangements went in Kenya.  Daniel arap Moi died on Tuesday, February 4,  Uhuru Kenyatta made the formal announcement on the same day.

The funeral started four days later, as the body was laid in repose at the Parliament buildings for Kenyans to file past and pay their respects. In the event, according to the Police, some 213,000 people did just that on Saturday, Sunday and Monday.

The formal state funeral was on Tuesday, and it had all the trimmings of a state funeral, the flag draped casket was drawn on a gun carriage and accompanied by a long formation of military personnel. About 30,000 people thronged the Nyayo National Stadium in Nairobi and went through the speeches and tributes and other things that made such a funeral.

Gideon Moi, son of arap Moi, told the world a juicy titbit about the man the family knew. He described his father as "a man with an elephantine memory and a compassionate heart". But this is the bit I liked: "He also loved meat, and nothing could come between him and meat even when the doctors warned him."

The people who came to the stadium were fed, an announcement had gone out that the first 30,000 people to arrive at the funeral grounds would be given a loaf of bread and a drink.

After the ceremonies, the body was then taken on a 220-kilometre journey to Kabarak, which is Moi’s hometown and the next day, Wednesday, February 12, he was laid to rest by the side of his wife Leah.

He died on Tuesday, February 4, and on Wednesday, February 12, it was all over. They had packed into the eight days, everything plus more that we Ghanaians would have done.

I can’t imagine what else we would have done, except perhaps order a special cloth which everybody would wear once and never touch again.

The Kenyans did not keep Moi in the morgue for weeks and months while an argument ensued about who would serve on the funeral committee.

They did not spend weeks having discussions between the family and the government about the funeral programme.

They did not have arguments over who would be listed as chief mourners and in what order.

They did not have endless meetings over the order of service and the hymns that would be sung at the ceremony.

And they certainly did not have to worry about which dates were suitable for which important personality who had to be at the funeral. 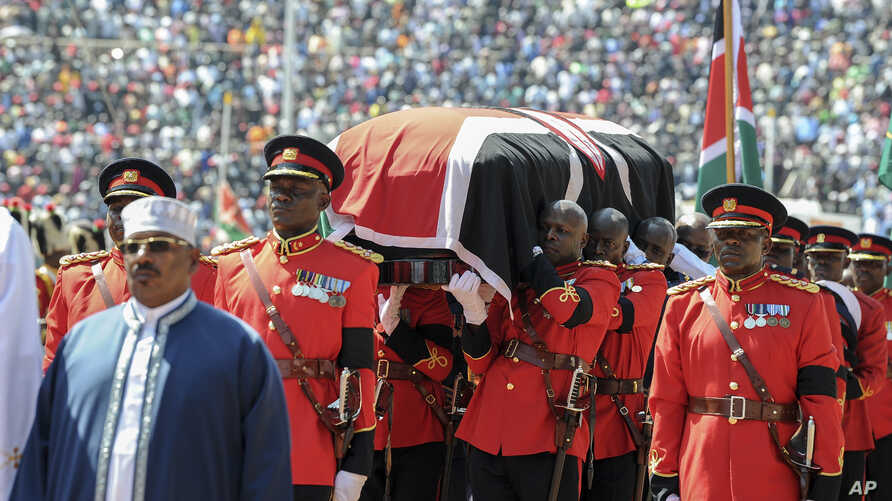 It simply did not occur to the Kenyans that they could have kept the body of their 95-year old former president in the morgue for weeks and months to be able to produce a magnificent funeral brochure.

It is worth pointing out that no one has suggested that by burying the former president within eight days after his death, any form of disgrace or disrespect had been shown.

Indeed, while I was impressed by how fast it took to get it all done, I read a story that said Moi had “finally” been buried in his hometown more than eight days after he had died!!.

On February 11, the South African, Joseph Shabalala, the founder of choral group Ladysmith Black Mambazo, died at the age of 78. Those of us who are of a certain age know Shabalala with deep affection and still sing his songs especially those in the Graceland album he famously produced with Paul Simon.

On Sunday February 16, President Cyril Ramaphosa declared that the state would honour Shabalala with an official category two funeral to be held on Saturday, February 23. In 12 days, it will be done; the funeral of one of the biggest musical stars.

And just in case, anybody is thinking these are not really big people, we might care to remember that Nelson Mandela died on December 5, 2013 and his funeral was held on December 15, 2013. It might also be recalled that the whole world was at that funeral. And it took 10 days between him breathing his last and being buried.

So, why do we in Ghana insist on keeping bodies in the morgue for such long periods?

Why are you accused of disrespecting a dead person if you try to bury early, where early could be within four weeks?

I accept that we want to spruce up the house but why does that mean keeping bodies in the morgue for more than six months?

I accept that we Ghanaians are now spread all over the four corners of the world and it takes time to gather the family, but we are not the only ones in the diaspora.

Do we really accept that we should be defined as the people who keep dead bodies in the morgue for months on end? Nobody else in the world does that.

Even our Nigerian cousins, who never do anything by halves, somehow manage to organise grand funerals within a fortnight of a death.

In Zambia, everybody is buried within four days.

Surely there is something we can learn from other parts of our continent? It cannot be a demonstration of love to keep dead bodies for as long as we do.