Elizabeth Ohene: News is on sale 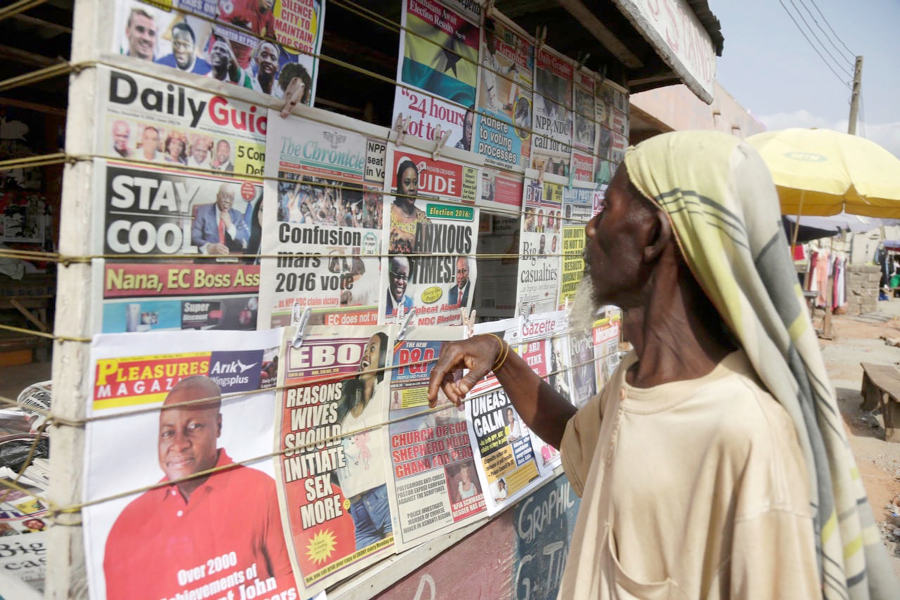 A passer-by at the newsstand
30.5k Shares

I note that advertising is in the news.  The dreadful event at Kasoa, in which two teenage boys reportedly murdered an 11-year-old boy, is being blamed on the unrestrained advertising on our television channels by fetish priests and occultists which are influencing innocent minds.

Advertising is one of my favourite subjects. I used to approach the subject from the perspective of an old saying that I learnt from my favourite English teacher.

The saying goes: Good wine needs no bush, and it can be translated as: Something of good quality does not need to be advertised.

The origin of the saying dates back to the times of old when grapevine or ivy or other greenery (ie bush) would be hung outside the door of an inn, a public house, or a guest house to indicate that alcohol was available on the premises.

The saying good wine needs no bush, therefore, is meant to say that if you have good quality wine on sale, you won’t need to hang any bush outside your door, its reputation will speak for itself.

Taken further, it will mean that there is no need to advertise or boast about something of good quality, as people will always be attracted to it even without any advertisement.

I admit that I should be the last person to express disbelief in advertising, seeing as the two professions that I have dabbled in all my life both rely very much on advertising for their very existence.

Where would journalism or politics be without advertising?

When a newspaper or radio or television station is doing well, you can tell by the number of adverts it carries.

It leads to all kinds of interesting problems of course, with the editorial department usually being on a different path from what the advertising department is pursuing.

I remember that time was when the two inch by five inch advert allowed on the front page of the Daily Graphic was solidly booked for a popular brand of cigarette.

Then came the days when there would be a feature article inside the paper on the dangers of cigarette smoking and the front page would be urging people to buy a particular brand of cigarette to show you were among the top people.

It may well be that whereas good wine does not need any bush, cigarette advertising shows that once you have lots of bush, you can push the wine, no matter how bad or how indifferent it may be.

The problem with advertising is that in trying to convince you to buy something that you may not otherwise want to or need, the product must be projected in the best possible light or be shown to have attributes that it couldn’t possibly have.

Thus in the old days, the biggest stars were paid and hired to be filmed smoking particular brands of cigarettes, in the hope the rest of us would be convinced to buy that cigarette. It worked pretty well until campaigns stopped it.

We might not be using stars to sell cigarettes or liquor today but we are doing something not very different in our country.

If you listen to the radio in this country, all the famous presenters go seamlessly from reading the news and leading the discussion on the great events of the day to reading adverts urging us to buy herbal concoctions and assuring us that a particular brand of cream is the best and we should buy an apartment in a new estate being developed.

How can listeners be expected to understand that the discussion, led by a famous voice on Free SHS or the government wasting our money, or the difference between DUMSOR caused by lack of money and DUMSOR caused by maintenance, is different from that same voice telling us to buy Milo because it is the best chocolate drink?

In other parts of the world, no media personality is ever allowed to lend his or her voice for any advertisement.

It is understood that you take liberties with adverts but the news and subsequent matters are sacred.

This will mean that a Kwami Sefa Kayi, a Bernard Avle, a Kojo Yankson, a Nana Yaa Mensah and others in that category, who front programmes, will not switch from selling miracle herbal concoctions to discussing corruption in the timber industry, to school uniforms and back to selling cars.

The next step is to tell us which of the pastors or churches are more powerful than the other and can possibly help us make more money.

When it comes to food and drugs, it has been determined that we the people need to be protected from the likelihood of anything being sold to us or advertised unless the product has gone through a lot of rigorous testing.

All foods and drinks and drugs have to be tested in the labs of the Food and Drugs Authority (FDA) and every advert of any food, drink or drug carries the legend, “this advert has been approved by the FDA”.

When it comes to matters spiritual, there does not seem to be an equivalent of the FDA that polices the spiritual offerings on sale for our needs.

And yet it appears there is more damage being caused by fake priests and their offerings than the danger posed by expired biscuits or dodgy concoctions.

I wonder who or what or how we shall go about testing the spiritual offerings to be able to pronounce them fit for public consumption.

The same way we have now learnt to look out for the FDA symbol on every bottle or packet or adverts on billboards or on the radio and television, we would look out for the spiritual clearance symbol that would tell us it is safe to listen to this priest, the oil he is selling is indeed holy and you can rub it in your hair.

There would be an acceptable definition of what is holy and what is fake.

Indeed, before anyone offers any religious or spiritual wares to the Ghanaian public, we would look out for the reassuring label that would tell us, “this church, or this fetish shrine has been approved by the Spiritual Assurance Authority”.

This article will, of course, be approved by some authority.