Listening in on the IMF 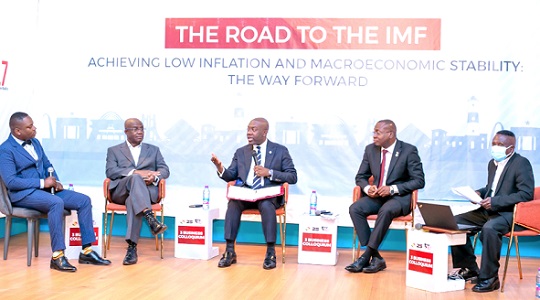 (Our Columnist is a fly on the wall in the room where the talks are being held between the government and the delegation from the International Monetary Fund).

Dear Lord and Father of mankind, the man intoned, forgive our foolish ways, reclothe us in our rightful minds and let us speak the same language and understand each other. Let flesh be dumb, let sense retire, speak through the earthquake, wind and fire, the still, small voice of calm. Amen.

I hadn’t closed my eyes during the prayer and I was watching the leader of the IMF delegation. He didn’t look happy and as soon as the Amen came, he said: “We were told this was likely to be a difficult trip but I had no idea it would be right at the start, let me state quite clearly that we, on this side of the table, don’t like the tone of the prayer”.

Let’s move on, the man at the head of the table said, the one thing we don’t have is time. Prayers are aimed at the Almighty and not at us mere mortals. It is only when we start talking to you that you can make comments about language.

Welcome to our country, you know it very well, you have been here many times, indeed, this is the 18th time you are here on this type of trip.

Both sides know the drill, so let’s get on with it. We need some money urgently to back us up with our Balance of Payments, the normal avenues for money have been closed to us since the rating agencies did their number on us last year.

The IMF man said: I am not sure if this is the time to mention this, but since you asked in your prayer that we all speak the same language and be brutally frank with each other, I should tell you that there are many Ghanaians who have sent messages asking that you should be denied the funds because they say they do not agree with the way you have been spending the money in the national treasury.

We have taken the trouble to look at some of the things you have been spending money on. The loudest item is Free SHS. I can tell you that this is something that has been discussed in our offices over the past four years and the feeling is you were getting above yourselves.

If you want some free advice, I would suggest you rename it Compulsory SHS. “Free” is political, it connotes campaigning for votes and the IMF cannot be seen to be doing anything that will make a government or political party popular, “compulsory” is more like what the IMF does; we don’t do free things, we impose things.

At least that is the reputation we have. A reputation that we got from years of bad mouthing from some people seated across the table in this room.

At this stage, the man at the head of the table cleared his throat loudly. Mister, he said, the word out there was that the IMF had changed its ways and was no longer synonymous with austerity, but it seems your language remains unchanged.

I note that you have some preconceived ideas about us and I think it is fair that I tell you how we see you just so nobody is under any illusions.

You deal in poverty, we have set our minds on prosperity. You are happy helping countries to just about manage to keep their heads above the waterline, we want to transform our economy to grow into an established and prosperous nation.

It is not the happiest day of our lives to have you here poring over our books. There is nobody among you or at your headquarters back in Washington DC who is more adept at figures than we are and when it comes to the language of Economics, you have nothing to teach us.

We have asked you to come because we are faced with what the Ewes among us call NYAWUAME. (the word is not translatable) Look into your books carefully and you will find that we were keeping to the straight and narrow and the figures demonstrate as much up to the end of 2019.

This is the government, after all, that brought legislation to restrict all governments to not exceed five per cent deficit spending. If it is a question of ideology, that is what we believe in.

The issues that have brought us to this state of affairs are truly beyond the normal. Since the inception of the IMF, it is not likely that we can find the convergence of so many extraordinary events that wreak havoc on an economy.

The COVID-19 pandemic, by itself, is enough to have turned the world upside down and it did. The repercussions are still reverberating around the world, with both the economic and health consequences hitting us hard.

If ever there was a lesson in how interwoven the world had become, we are learning it from the effects of Mr Putin’s adventures in Ukraine on our pocketbooks here in Accra.

We had inherited some dodgy contracts which impose excess capacity charges in the energy sector. They are enough to bring any economy to its knees.

We had undertaken a major clean-up of our banking sector. It was expensive but necessary, and it is something that would normally have won us a lot of kudos, but having done it just before the onset of the cataclysmic world events meant the stuffing was knocked out of us.

So, you are not dealing with a group of know-nothing spendthrifts who have spent their way into trouble.

If it would make you feel any happier, let me tell you that we have recognised more keenly than ever before that countries like ours are at a great disadvantage in the world economic architecture as currently constructed.

The past nine months of trying to find a way out of the economic morass we found ourselves has brought home to us more than ever before, the painful truth that we must be self-reliant, and take Ghana truly beyond aid.

We also know that in the scheme of things in the world, you are powerful. Our bonds are suddenly attractive on the bond market and friendly lenders, who wouldn’t return our calls, are suddenly making offers, simply because the IMF has come into Accra. We accept that you have the key to unlocking the international financial market.

If there is a Muslim among you, can he say the closing prayer please and we will bring today’s meeting to an end.

There is a Muslim among them and he said, now that you recognise our power, all I need say is Ameeen.