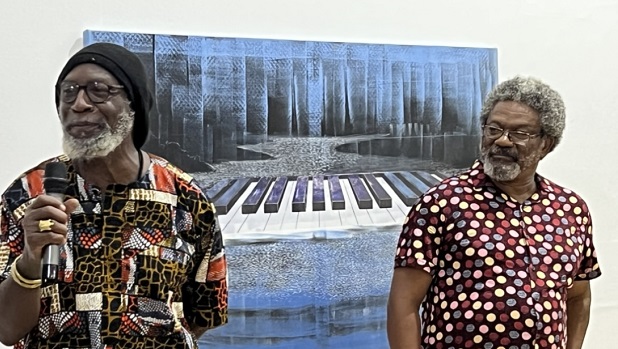 Decades of maturity as painters manifested on their canvasses as the latest exhibition by Sami Bentil and Wiz Kudowor opened on Thursday, November 25, at the Museum of Science and Technology on Barnes Road in Accra.

Many different things serve as inspiration for the works of the two artists. These include beauty of the landscape, love of music, traditional symbols, distinctive faces and gait of women and spiritual disposition.

The artists have synthesised all those elements and more in energetically fluent and highly individualised ways that Wiz Kudowor describes as an “exploration of the boundaries and grey areas between the physical and spiritual manifestations of humanity.”

‘In a Space of Suspicion’ by Kudowor

The opening reception was a lively affair with lots of Sobolo, Asaana, Pito, Palm Wine, Atadwe Ginger, Lamugin, Brukina and other local drinks on offer to go with tasty finger foods. Recorded kora music played non-stop in the background.

Guests admire some of Kudowor’s paintings

A work by Bentil fascinates some guests

The works on show are obviously open to interpretations. Guests were seen discussing specific items among themselves or engaging the two artists for broader views.

Sami Bentil and Wiz Kudowor have been active painters for more than four decades and it doesn’t look like they are slowing down anytime soon. 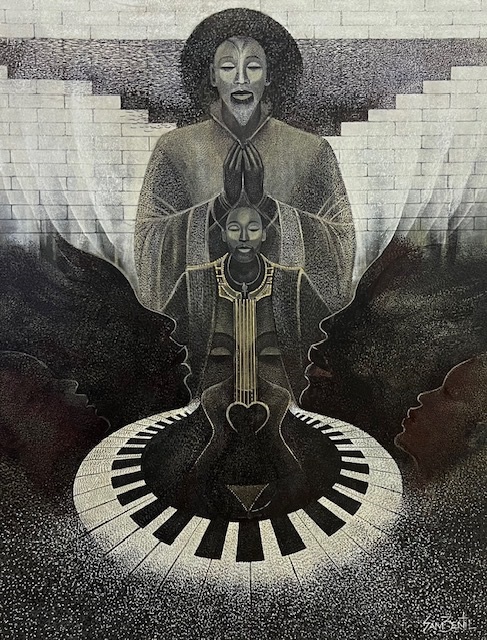 ‘The Maestro’ by Bentil

‘Reclined Woman’ by Kudowor
Newcomers to their works would see fascinating, distinct styles to feast their eyes on. Those already familiar with what they do would find the two artists still pushing themselves to excel and holding on strongly to their  Ghanaian and African heritage.

Guests discuss a work by Bentil

The PropaGhanaArt exhibition ends on December 14.