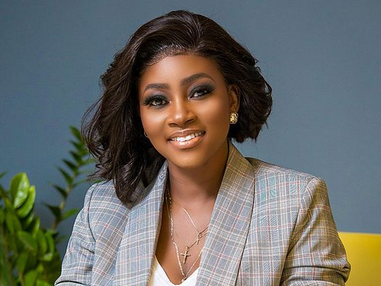 She appears on television looking all glamorous but TV3’s Cookie Tee, real name Shirley Emma Tibilla, says she comes from a very humble beginning and has really paid her dues to be where she is now.

In an interview with Graphic Showbiz recently, Cookie Tee opened up on growing up and the struggles she went through.

“I remember when I came to Accra; when I moved from the Volta Region to Accra many years ago, my mother wanted to enroll me in the best of schools. She took me to Achimota School but it was full so we couldn’t get admission and she struggled to put us in one of the international schools in Abeka called Harrow.

“For my entry exam, I couldn’t even spell words like mango and friend and that was the turning point in my life. My mother was extremely disappointed so she got teachers for me at home.

“I would go to school in the morning, do afternoon classes after school and come home to do evening classes. When I started Harrow, I had to repeat Class Five. We were 79 in the class and I remember the first term I placed 16th, the second term I was 9th and the third term I placed 4th.

“I was 4th until I left the school because there were three strong boys I couldn’t beat. I just want to give hope to people like me from humble beginnings, people who feel that there is nothing left in this world for them to know that it is possible if you put your mind to it,” she said.

Away from that, Cookie Tee, who joined Media General last year from EIB Network and has been co-hosting the morning show, New Day, on TV3 said the experience was helping her to be more versatile.

“You need to read a lot and be on top of everything. Currently, I am an all rounder, I do current affairs, politics, social issues and entertainment, I do everything and it makes me versatile.

“I see every day as a new challenge, you wake up very early in the morning to just face the day and it could be anything; your discussions could centre around social or political issues so the more you know, the better. It is a lot more demanding in terms of reading, research, having the facts and knowing what you are talking about,” she explained.

Interestingly, Cookie Tee started out as an actress before she moved to the media. “I have always been an actor, my career actually started with acting but because TV presenting has taken a lot of my time now, I haven’t had time for scripts in recent times.

“I have had to decline a number of scripts that I got because there is actually no time to be on set,” she stated.

She answered in the affirmative when Graphic Showbiz asked her if she was dating and if she has plans of settling down anytime soon.

“Right from when you are born as a woman, per our orientation as a Ghanaian or an African woman, every woman wants to get married so yes someday when God blesses me, I would love to settle down,” she stated.

On where she sees herself in the next couple of years, Cookie Tee said, “When you mention the name Cookie, I would love it to be a household one. You mention my name and everybody goes like ‘yes I know that lady on this TV station or I know this lady for that programme.’

“I want to be able to give hope and life to young ones. I have always said that I didn’t start off like this and I come from a very humble beginning. I just want to give hope to people who have never thought that they can become anything in life,” she concluded.