What is a Bisht? The black cloak Lionel Messi wore 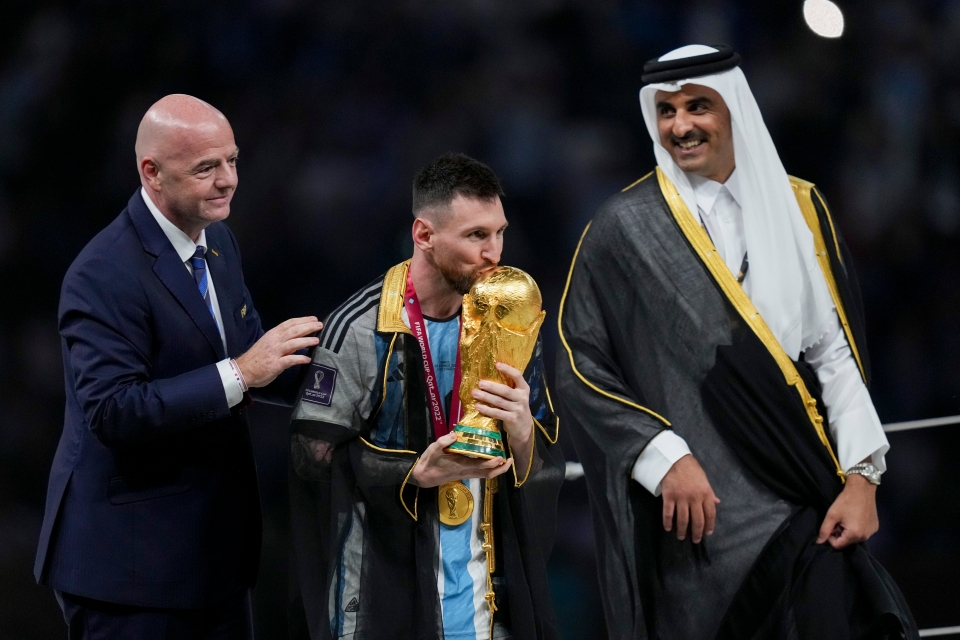 What is a Bisht? The black cloak Lionel Messi wore to lift the World Cup trophy after Argentina beat France
30.5k Shares

Lionel Messi wore a black cloak as he lifted the World Cup to celebrate Argentina’s victory over France in the final on Sunday, December 18.

The showpiece match of Qatar 2022 was one for the ages, with Argentina edging the contest on penalties after the match had finished 3-3 following 120 minutes of enthralling action.

A penalty from Messi and Angel Di Maria’s strike put the Alibceleste in charge of the final as they went 2-0 up at half time.

They appeared to be cruising to a convincing win before Kylian Mbappe levelled for France as he scored twice in the space of 97 seconds – the first a penalty and the second a brilliantly taken volley.

Messi then struck early in the second half of extra-time but he and Argentina were pegged back once again with another Mbappe penalty.

The final was then decided via a dreaded shootout and Argentina came up trumps as Emiliano Martinez saved Kingsley Coman’s spot-kick and Aurelien Tchouameni fired wide. Argentina scored all four of their penalties.

Messi won the Player of the Tournament award before getting his hands on the trophy that had eluded him throughout his career.

Before the iconic moment he exchanged pleasantries with FIFA president Gianni Infantino and Emir of Qatar Tamim bin Hamad Al Thani, who put a robe on him just before the trophy lift.

The cloak Messi was wearing is a Bisht, which is a traditional men’s cloak that’s popular in the Arab world and is understood to date back thousands of years.

A Bisht is worn on special occasions such as weddings or celebration of festivals such as Eid, the religious holiday celebrated by Muslims that marks the end of the month-long dawn-to-sunset fasting of Ramadan.

Dr Mustafa Baig, a lecturer in Islamic Studies at the University of Exeter, said: “Only a select few people would actually wear the bisht.

Speaking about Messi wearing the garment, Dr Baig said: “They basically honoured him by putting it over his shoulders.

“It’s like a mark of honour, and just kind of a cultural welcoming and a cultural acceptance.”

BBC presenter Gary Lineker felt the decision spoiled what should have been a “magic moment”.

The former England striker said: “This is a magic moment. It seems a shame in a way that they’ve covered up Messi in his Argentina shirt.”

Ex-Argentina defender Pablo Zabaleta agreed, saying: “Just why? No reason to do that.”

It may have been a bizarre sight to those not familiar with the custom, but it was not as strange as Infantino’s white trainers.

While nothing odd about the footwear, the fact he had them customised so ‘FIFA’ was printed on the side of them.