SSUE moves up at Signature Concert 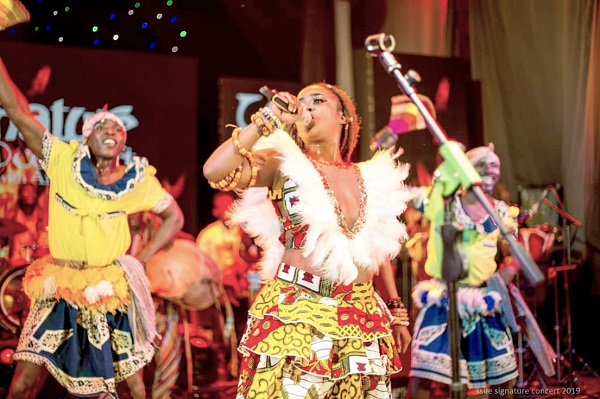 SSUE in action at the Signature Concert
30.5k Shares

She’s not the type of artiste given to basking in the glow of new conquests for long, and that was why SSUE pushed on to raise the bar for herself at her Signature Concert on Saturday, July 27 at Alliance Francaise in Accra.

It was a very visual, eclectic package that embraced traditional and contemporary dances, Hip Hop, Highlife, Soul, Reggae, R&B and more. The Signature Concert was the latest of SSUE’s shows to remind the music-loving public of her strong presence as a live performer.

Her 90-minute set was preceded by a 25-minute session with singer/saxophonist Asabea Cropper. Accompanied by her brother Eugene on bass and the six-piece Ananse band, Asabea was the special guest at the show. She performed some of her known tracks such as ‘Torwia’ and ‘Inamosi’, finishing off with the ever-popular ‘Wamaya’.

SSUE is a strong believer in the late South African musician, Hugh Masekela’s assertion that the older generation of Africans should pass down the poetry, music, dances, costumes and other relevant aspects of their heritage to the younger folks. Asabea’s presence was her (SSUE’s) thumbs up to Masekela’s position.

Singer Imma Emmanuel also delighted the audience with a blend of his own songs and cover versions of some popular material. His ability to communicate well with the audience worked to his advantage.

Arriving on stage as a traditional queen with her courtiers in tow, SSUE showcased some of the well-choreographed movements she had worked out with the Ghana Dance Ensemble. The fluidity and confidence in her moves were noticeable throughout her time on stage.

She sang some of her songs such as ‘Commotion’, Fire Fire Fire’ and ‘Hypnotise’ and danced a lot more than at previous shows, confidently integrating traditional steps such as Adowa, Agbadza and Bamaya.

A sprightly hip hop set with rapper Ian Jazzy followed as they rocked with tracks she had written such as ‘Don’t Talk’, ‘Twinkle Twinkle’ and ‘I’m Straight’.

Ballads with Imma Emmanuel are often the icing on the cake for fans at a SSUE show and they did original tracks, as well as some classic love songs. A section of the audience, touched by the renditions, sang along with them to close the show.
SSUE clearly demonstrated she was capable of climbing some notches higher at every concert. The show also premiered the video for her ‘Fire Fire Fire’ song.

The Ananse Band, led on keyboards by Obed Boakye and with Samuel ‘Sammix’ Apau on guitar, backed all the acts at the very entertaining concert put together by Scratch Studios headed by Kofi Amoakohene.
SSUE is scheduled to leave Accra on August 27 with the Ananse Band for Johannesburg, South Africa to perform on August 30 at this year’s Imbizo Music Festival.