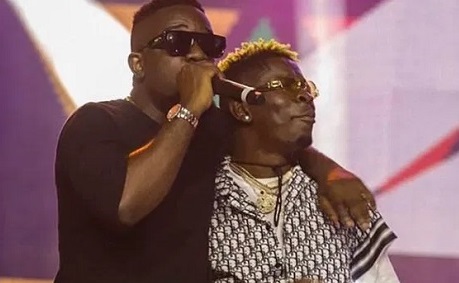 Sarkodie and Shatta Wale performing together

After about two years of 'beefing', rapper Sarkodie and Dancehall artiste Shatta Wale, have shared the stage again.

The two reunited for a performance at Sarkodie's Black Love virtual concert which came off on Sunday, August 16.

The duo, who used to be very good friends, had a falling out when Shatta Wale claimed Sarkodie was poor and living a pretentious life. While he didn't respond for a long time, Sarkodie released the popular Advice track which hit hard at Shatta Wale.

After that the relationship deteriorated although Sarkodie congratulated Shatta Wale on his feature by Beyonce.

However, the two, who have collaborated on a number of songs, made up on Sarkodie's birthday when Shatta Wale was phoned in and wished him well.

And they made it official with their performance of their track Me Gye Wo Girl on Sunday.

Whenever you pray, ask God for a good heart like Shatta Wale, he has good heart and understands showbiz pic.twitter.com/65DLeg52C3


Shatta Wale's inclusion in the concert was kept quiet and his name was not even included in the line up of artistes.

If it had not been for Stonebwoy's altercation with Sarkodie's manager Angel, this would have been a real surprise performance.

However, some viewers were still surprised and it generated quite the chatter on social media.

The Black Love concert was streamed on ceek.com with the site crashing at some point in the show because of the huge numbers who watched it.

Apart from Shatta Wale, other artistes who performed at the show included KiDi, Efya and King Promise.

Sarkodie has received congratulations from several people on social media for what many have described as a well produced show. Below are some of the messages.

Super proud of you champ. 🤴 pic.twitter.com/zBYxlyMF5v

Anything Sarkodie does is TOP NOTCH 💫 #BlackLoveVirtualConcert 🔥🔥

Congrats to the highest @sarkodie on your show last night. More Powers!!

Just read the letter from the sarkcess team. Let them know that if they telecast the show again we will surely watch it again cos it's worth watching. @sarkodie u are a champ #BlackLoveConcert #Ceek #CeekSark