Ready to sing for all presidential aspirants – Sherifa Gunu 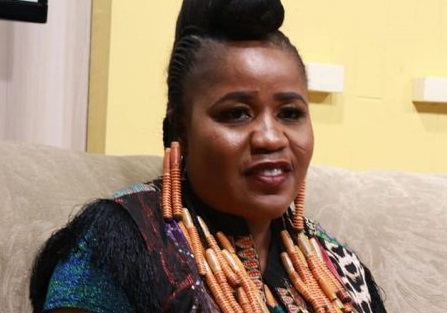 One of the enjoyable aspects of elections season in Ghana is the songs that musicians compose for the various political parties they support.

Over the years, some musicians such as Lucky Mensah, Daddy Lumba, Kwabena Kwabena among others have done songs that have become very popular and endured.

This year, the story is no different with a number of musicians composing songs for the parties. Samini has done a song for the New Patriotic Party (NPP) and to some extent, Sarkodie's song Happy Day featuring Kuami Eugene has been perceived as an endorsement song for the NPP.

Although openly showing one's preference can spark a backlash, Neo-traditional artiste Sherifa Gunu says she is willing to compose songs for all the 12 presidential aspirants.

According to her, she does not care whatever anyone says about her provided the money she is offered is good.

“Why should I worry about what Ghanaians will say about me when I compose a song for a political party? I am just doing my work, it is just like I have been paid to mount the stage to perform. I take my money and I deliver for you perfectly. I don’t see anything wrong with that,” she told Graphic Showbiz recently.

On how she would go about things if she is given an offer, she said once she is approached by a political party she will discuss their plans for the country and use that to write the songs.

“I am very talented when it comes to writing songs. If I have the 12 presidential aspirants calling on me to compose songs for them, it will only take me two weeks and I will be done,” she said.

Sherifa Gunu also indicated that she would be very busy this month and December releasing songs.

“I have a song with an artiste from the UK called Tino Kamal, which will be dropping soon. He will be in Ghana this year to film the music video which I am very excited about. I also have songs with Sarkodie, Ras Kuuku, and Fameye so watch out for them,” she said.

Some of the songs Sherifa Gunu has to her credit include Salamatu, Dingo and Beautiful.