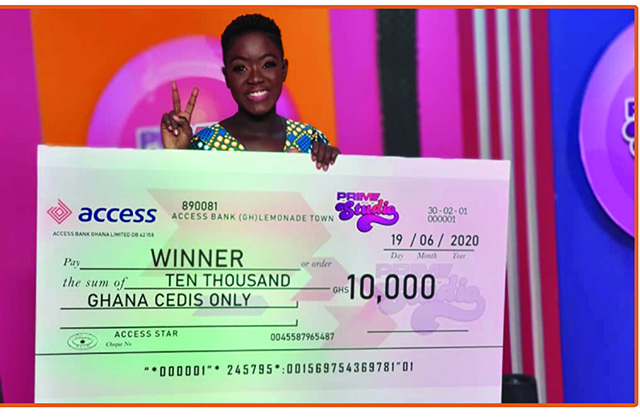 Henrietta Nana Adwoa Marfowaa, who entered music realty show, Prime Studio competition as NAJA has been crowned winner of the first season of the competition which aired on Joy Prime.

After l3 weeks of competition from the contestants, NAJA emerged winner with an impressive score from judges—Dancehall artiste Stonebwoy and seasoned music producer, Dominic Ansa-Asare as well as public votes.

NAJA bagged a one-year recording deal with Alpha Omega Media Group, GHc80,000 worth of promotional airtime with Multimedia Group and a cash prize of GHc10,000 given by Ghanaian entrepreneur and Afrobeat artiste, Luminary DMR, who is known for songs, Agyeiwaa and Bobobo.

Contestants Kissys and R.Tay emerged first and second runners up respectively. They took home GHC5,000 and GHC3,000 cash prizes respectively and GHc10,000 worth of promotional airtime each with Multimedia Group.

NAJA travelled from Sunyani in the Brong Ahafo Region to Accra every week to compete and it is not surprising how her determination and consistency throughout the competition contributed to her wining the ultimate prize.

At the grand finale, she performed two songs: W’afere (her own composition) and a cover version of Kuami Eugene’s Walaahi.


In an interview after her win, NAJA said that even though she aimed at the ultimate prize, she was still surprised to emerge winner.

“I am really happy and surprised as well. I wanted to win and so I worked hard for it, but the other contestants also worked very hard and so at a point, I had my doubts about winning but here I am today,” she stated.

The three stages of the competition involved the first session where the number was pruned from the initial 20 selected to 10. The number was again watered down to five who made it to the finals where NAJA came tops.

Tom Beatz, Nero Steger, Odikro, Harrison Me and Short were the music producers who groomed the contestants.

Prime Studio is an initiative of Joy Prime and Adonko Bitters with support from Luminary DMR.