BY: bbc
Category: Showbiz News
Kardashian said she had been "so honoured" to wear Marilyn Munroe's dress
30.5k Shares

A US museum has denied claims that an iconic Marilyn Monroe gown was left damaged after Kim Kardashian wore it at the Met Gala last month.

Recent images appear to show stretched fabric and missing crystals from the dress, according to Monroe historians.

But the gown's owner, Ripley's Believe It or Not, says a "calculated risk" was made in allowing the dress to be worn and it was not damaged "in any way".

Monroe wore it when she sang Happy Birthday to President Kennedy in 1962.

Scott Fortner, who has curated his own private collection of Marilyn Monroe artefacts, posted photos online earlier this week that he said showed "significant" damage after it was loaned to the reality TV star.

Ripley's Believe It or Not was widely criticised for allowing the TV star to wear the fragile gown. However, on Thursday, June 16 2022, it rejected the damage claims.

"From the bottom of the Met steps, where Kim got into the dress, to the top where it was returned, the dress was in the same condition it started in," Amanda Joiner, Ripley's vice-president of publishing and licensing, said in a statement.

Ripley's said that a condition report from 2017 stated "a number of the seams are pulled and worn. This is not surprising given how delicate the material is. There is puckering at the back by the hooks and eyes".

Ripley's bought the dress for $4.8m (£3.9m) in 2016, setting a Guinness World Record for the most expensive dress sold at auction.

It is now estimated to be worth more than $10m, the museum says.

Adorned with more than 6,000 hand-sewn crystals, the gown was designed by lauded French costume designer Jean Louis. It was so tight, Marilyn Monroe reportedly had to be sewn into it. 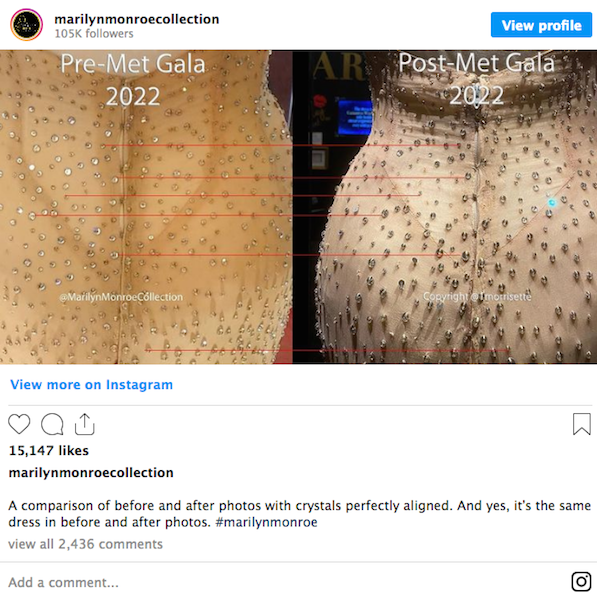 Mr Fortner called the decision by Ripley's to allow Kim Kardashian to wear the dress "irresponsible" and motivated by "publicity".

"When you buy something of such significance, you really need to stick to your word to protect and preserve it… and clearly that didn't happen," he told the BBC.

"This is a significant piece of American culture, celebrity culture, political culture - it's probably the most famous gown in the world and definitely the most expensive. So why they would allow it to be worn is really the question."

Kardashian wore it on the Met Gala red carpet, then changed into a replica for the rest of the evening.

She teamed it with a fur stole to hide the back of the dress because the zipper would not do up.

She has previously said she wore the dress for a matter of minutes and did not sit down in it.

But after her red carpet appearance,  she was accused of sending a damaging message about extreme dieting, saying she had lost 1st 2lb (7.3kg) in three weeks to fit into the gown. 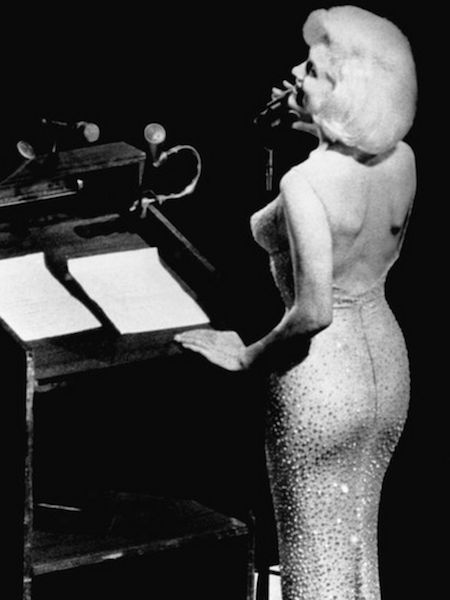 Mr Fortner says Kim Kardashian should not be criticised for the damage, because it is the museum's responsibility to care for the gown.

"It's the most famous dress in the world. Who wouldn't want to wear the dress if they were given an opportunity to do so?"

After the Met Gala on 2 May, the International Council of Museums said in a statement that although the dress was part of a private collection, "historic garments should not be worn by anybody, public or private figures".

Ripley's statement said Kardashian had highlighted the historical importance of the dress and introduced "the legacy of Marilyn Monroe" to a new generation.

Repairs would cost tens of thousands of dollars

Dr Kate Strasdin, a senior lecturer in cultural studies at Falmouth University in the UK, has worked alongside curators and conservators of historic dresses for more than 25 years.

She told the BBC that since the 1970s, specific guidelines had been developed relating to how historic garments should be handled.

"One of them is you absolutely cannot wear historic garments, you just can't," she said.

"You can't even handle a dress like that without damaging it in some way, let alone wear it, so it was inevitable that there was going to be significant damage just by even wearing it on the red carpet."

She added that the dress was "entirely unique" as it had been designed specifically for Monroe to wear using a "soufflé-like silk" that was very expensive.

Repairs would cost tens of thousands of dollars, she said, and anyway, the fabric isn't made any more.

Scott Fortner wants the dress removed from Ripley's collection - where it is displayed behind glass on a mannequin especially made to Marylin Monroe's measurements - and sent to the Smithsonian in Washington DC, where the likes of Abraham Lincoln's top hat and Judy Garland's iconic ruby slippers from The Wizard of Oz are housed.