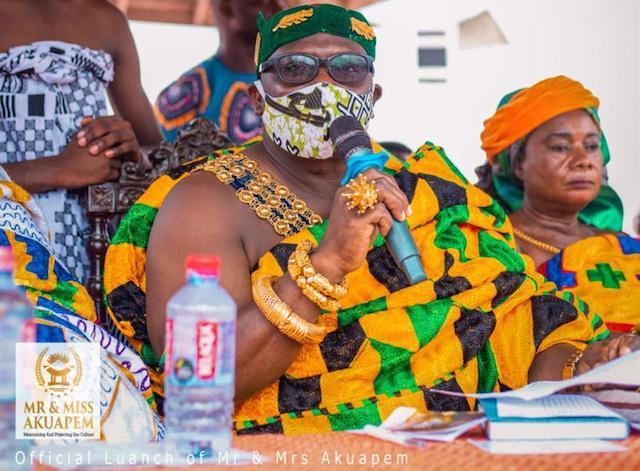 The maiden edition of Mr & Miss Akuapem aimed at showcasing the culture and originality of the Akuapem state was recently launched at the Palm-Hill Hotel at Akropong-Akuapem.

An initiative of Chilky Modelling Agency, in partnership with the office of the Okuapehene, Oseadeeyo Nana Kwasi Akuffo III, the unisex pageant will add to the activities pencilled for this year’s Odwira festival, scheduled for October.

It will be held on the theme: “Unifying, Maintaining and Projecting the Akuapem Culture.”

At the launch, Oseadeeyo Nana Kwasi Akuffo III said culture “is the lifeblood of any vibrant society and our creative expression helps to define who we are while using the world through the eyes of others.”

“It is the duty of the present generation to acknowledge the necessity and importance of preserving our rich cultural heritage.

"Also, we need to show respect to our culture no matter how humble it seems to be. I urge you all to feel proud of our culture and identity and the need to maintain, preserve and project it," he stated.

Mechanics
According to the organisers, who are hoping to make the pageant an annual affair, the contest will start from Sunday, August 1 and run for eight weeks till the grand finale on October 16.

The contestants will undertake varied tasks on which they will be judged. The contestants are also expected to have a fair knowledge of the Akuapem state and the history of its people.

In a presentation at the launch, the CEO of Chilky Group of Companies, Prince Asiedu Chilky, indicated that there was the need to revisit the original traditions of the Akuapem people.

Launching the pageant, the Adukromhene, Nana Osuodumgya Otutu Ababio V, said he hoped it would unify the people, maintain and project their culture.

The event was attended by a number of royals, dignitaries, sponsors and well-meaning persons of both Akuapem and non-Akuapem descent.