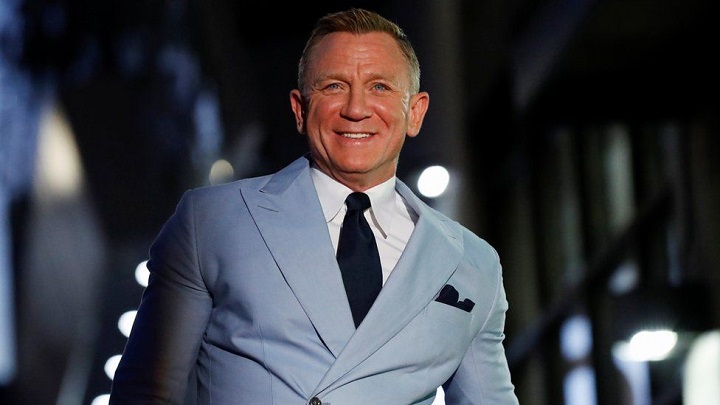 Daniel Craig has capped the launch week of his final James Bond movie by becoming the 2,704th celebrity to be honoured with a star on the Hollywood Walk of Fame in California.

It was unveiled outside 7007 Hollywood Boulevard, in honour of the fictional British spy's code number.

Just yards away is the star of his predecessor as Bond, Sir Roger Moore.

Craig, who has played 007 since 2006, said it was an "absolute honour to be walked all over in Hollywood".

The 53-year-old was introduced by Bond producers Michael G Wilson and Barbara Broccoli, along with his co-star in the latest 007 outing No Time To Die, Rami Malek.

Before his star was unveiled, Craig said: "To Michael Wilson and Barbara Broccoli, I thank you from the depth of my heart, without you I would not be here today - thank you for those lovely words. Thank you to Rami for those beautiful, beautiful words.

"I never thought I would hear myself say this, but it's an absolute honour to be walked all over in Hollywood."

Craig also joins fellow Bond actors Pierce Brosnan, David Niven and Barry Nelson on the Walk of Fame, although the late Sir Sean Connery does not have a star.

No Time To Die won critical praise and earned the highest opening weekend takings of any Bond movie in the UK - after repeated delays to its release date because of the coronavirus pandemic. The film opens in the US on Friday.

Craig said: "If happiness was measured by the company we keep, then me being on this pavement surrounded by all of these legends makes me a very, very, very happy man. So thank you very much."

Malek, who won an Oscar for his portrayal of Queen singer Freddy Mercury in the movie Bohemian Rhapsody, plays supervillain Safin in the latest instalment of Bond's adventures.

Speaking at the ceremony, he praised Craig as an actor and a colleague.

"We all know he's a superb actor, he's dedicated, he can handle all his own stunts with one hand tied behind his back and the other holding a Negroni," Malek said.

"But he's as fastidious about his craft as he is about his empathy for everyone around him.

"He has this ability to hold these two potentially opposing things at the same time - an incredible amount of talent and responsibility and an incredible warmth and acute awareness of what those around him need."

Anti-vaccine demonstrators also attended the ceremony, to protest against Los Angeles passing one of the strictest vaccine mandates in the US.

Stars on the Walk of Fame are awarded each year by the Hollywood Chamber of Commerce, chosen from hundreds of applications.

Recipients also pay a sponsorship fee of $50,000, which pays for the creation and installation of their star, along with the maintenance of the entire attraction.