I won MTN Hitmaker on my fourth attempt — Adepa 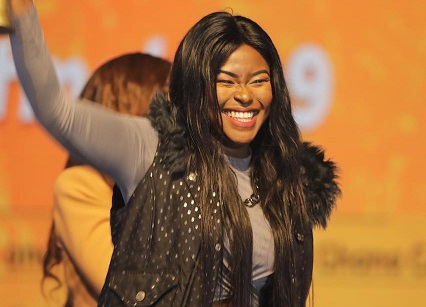 THEY say ‘if at first you don’t succeed try again,’ but for the winner of MTN Hitmaker Season 9, Adepa, who was crowned on Saturday, November 28, she tried three times but failed but succeeded on her fourth attempt.

She wanted so badly to be part of the music reality show that she auditioned for MTN Hitmaker three times and every time she seemed to be making into the final list of contestants, fate would intervene and something would happen that would make her pull out.

However, the stars were aligned in her favour this year and she made it all the way and according to Adepa, real name Flora Kumi, who also becomes the first Gospel musician to win the competition, the only thing that pushed her to keep trying was her hunger to be part of the show.

“Last year for instance, I made it to the final 19 where 12 would be selected but I had an emergency and left. This year, I had hoped that wouldn’t happen and it didn’t. I will say, I wanted to be part of the hitmaker train very badly so I was not ready to give up,” she told Graphic Showbiz after her win.

Read more: Eviction from GMB made me depressed — Ofosua

Describing the finals, which came off at the Dome, Accra International Conference Centre in Accra, she said she had been ready for anything. “During the segment where we had to perform our own songs, it was clear that mine stood out and I knew it was going to be a good night but as for me winning, I wasn’t sure of my chances.”

When asked what the win meant to her, Adepa said, “Inasmuch as I’m happy that things turned out this way, this is for all those who believed and still believe in me.”

“Growing up, I had people who thought I was a good singer and they kept encouraging me to go for such competitions. These people had faith in me that I had what it takes to win and it happened.”

“Again, it is to tell everyone out there that it is not too late to start, to pursue your talent. Look at my age, 30 years, and I am the winner of MTN Hitmaker Season 9 just because I still pursued what I believed in.”

Adepa said her time in the MTN Hitmaker competition had been an eye-opening experience. “It was a great one, I didn’t have it easy because before I went for the audition, I thought I was good but when I got there and heard others sing, I realised my talent was not really up there and it challenged me.”

“Even in the competition, the other contestants were good and I learned a lot from that, everyone had something different to offer. The strategy I used was to pick things from each of them and add to my craft to make it better,” she said.

She thanked all the judges and guest judges for their insightful comments. “I want to say a big thank you to Richie Mensah for his encouragement. Kaywa was always blunt with me and sometimes it got to me but I believed it was for the best.”

“Eazzy is one great lady I admire a lot. She has been around for a long time yet she still has the spark and has her act together.”

On what her future plans are, Adepa, who is a scientist and a member of Roverman Productions, said, “Currently, I am still in talks to get a record label and then start dropping some singles. Apart from that, it’s an honour to be the first Gospel musician to win MTN Hitmaker.”

'We did not see eye to eye' but... - Akufo-Addo eulogises Rawlings