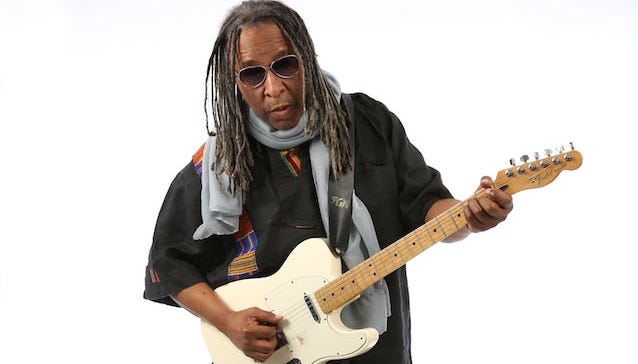 LONG-standing Osibisa member, singer/ guitarist Gregg Kofi Brown, has arrived in Accra from England to receive the Lifetime Achievement Award to be given to the famous Afro-rock band on Saturday, November 20 at this year’s Ghana Arts & Culture Awards (GACA) at the Alisa Hotel in Accra.

Gregg Brown has been part of Osibisa for over 34 years. He also has material under his own name and has recorded with Sting as well as Jazz greats including Billy Cobham, Patti Austin and Stanley Jordan.

He will feature in a show dubbed The New Dawn Concert of criss-cross rhythms on Sunday, November 21 at the Virtual Hub, East Legon in Accra.

New Dawn is the title of Osibisa’s latest album and Gregg Brown wrote most of the tracks on it. On the bill with him for the night will be another Osibisa veteran, keyboardist Bessa Simons. They will be backed by the Bessa Band.

The New Dawn album represents the phases Osibisa has been through since 1969 when it hit the British music scene with a big bang.

The band got worldwide attention with the release of its self-titled debut album in 1971. Osibisa’s style is a thrilling mixture of Highlife, Jazz, Soul, Rock and Funk. The band played a big part in creating an awareness of African music across Europe and North America in the 1970s.

Bessa played with several bands in Ghana before moving to England in 1986. He formed the first Bessa Band there. He also did session work for names like Alexander O’Neal, Hugh Masekela and Manu Dibango.

He toured the world with Osibisa. He has been back in Ghana for a while and reformed the Bessa Band which has been a capable addition to the nation’s live band circuit.

“Osibisa is a brand cherished all over the world. The line-up has been changing but the infectious music has consistently brought joy to music lovers across the world,” Bessa said about the band.

The Boisdale Music Awards in London which annually celebrates the greatest musicians in Jazz, Soul, Blues, Reggae and Pop, this year conferred The Band of the Centrury honour on Osibisa.