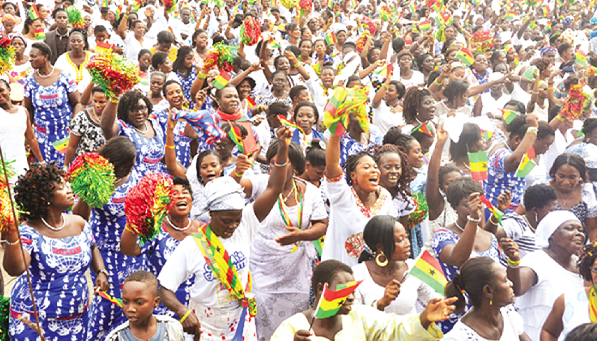 Flasback: Some members of Wome's Aglow during a national prayer session at the Independence Square in 2016
30.5k Shares

The Ancient of Days, God, was sitting on His stately throne in magnificent splendour, clouds of crystal light billowing all around Him. He was morose, ill at ease, shifting now and then in His seat. Problem?

From earth, smoke of impenetrable density had ascended to the borders of heaven and was near polluting the atmosphere.

The angels held the smoke in check. He knew too well that humanity was in crisis, given the intensity of evil deeds on earth.

When they opened their mouths to worship or praise him, the odour that poured out of them was like rotten eggs mixed with the stench of a dead goat!

The Ancient of Days was not happy at all in heaven. His dream creation, humanity, was almost lost to Him. That would amount to work done in vain. He decided on a plan.

His first port of call was to the most powerful, wealthiest and blessed nation on earth, His pride and hHs star nation. He was stunned.

The people had grown so prosperous they had turned their back on Him! Whew! God whistled out of disbelief.

In fact, they had decided that the nation would not be taught anything about his Word, and that references to Him should be excluded from the text books in the schools.

Above all, He also witnessed a high level of sexual abnormalities, with men and women marrying each other, and women having sex with dogs!

With a heavy heart, He went to the other developed nations across the Atlantic Ocean; perhaps He might be welcomed there.

While He was air borne, about to land, He knew in His spirit that his adversary had beaten him to the people. They were lost!

They had completely forgotten the great liberation that He had worked in their lives during the World War II.

They had taken for granted the prosperity that He had made them to enjoy and, they too, like their big brother, had nothing to do with Him.

He decided to find out things for himself. He went to church on a Sunday.

Apart from an old priest and some few aged people with their grandchildren, none were in the church. It was near empty. God wept!

Ei, He said to Himself, so if these people in advanced civilisations have turned their backs on me; if these whom I nurtured on my Word have grown so content that they deride my teachings and hold me in contempt, to whom should I go?

Ei, life is cruel oo! How could humanity be so ungrateful?

God had never felt so lonesome, so lost, so unwanted, so helpless. He was in a wonderment of perplexity.

Having nowhere in particular to go next, he just allowed the wind to take him anywhere, just floating. He passed over the Sahara.

He was amazed He Himself had created such a vast land of aridity. Once upon a time, it was filled with a civilisation. He had forgotten whom. In its present state, it was not hospital to humanity.

Well, he mused, but if you make life comfortable too for them then they forget you, and say unmentionable things about you. Humanity! Whew! God whistled.

Whilst in the air, God espied a column of light emerging from somewhere. It was like the beams of a search light or a light from a lighthouse.

It was far off. Its vibrations were sweet. He felt it. He hurried in the direction of the light. He knew it was on the west coast of Africa. He hurried on.

Long before He crossed over closer to the source of the light, He experienced a swell of pleasurable sensation coursing through Him; what could that be?

From where is this coming? On he came, till a mighty wave of energy shook Him visibly and He began to gasp for breath.

Up in the air, He saw the land of Ghana. He increased speed. Then He saw the source of the most pleasant surprise in His life.

At the Independence Square, waves of adoration, praises on praises, choruses on choruses, prayers on prayers, were ascending to heaven with such fervid heat and passion as had not been seen in that party of Africa for ages.

He went delirious with joy. He danced with the people. He was happy. He never had such a fantastic time. He danced till his legs ached.

What! So, there were people like this and he was all the time wasting so much time on the advanced civilisations? Whew! God whistled, out of sheer amazement at the simple gratitude of a people, the people of Ghana.

He floated around for a long while and savoured every prayer that floated to Him. He instantly took a decision.

He went back to heaven and reported to the Grand Council of the Trinity what His experiences had been on His extended visit to earth.

He narrated how cold and distant the people of the advanced civilisations had been. He feared for their end.

His dismal story ended, God’s face lit up when He told them of his flight to Ghana, and discovery of a people who respected, trusted, adored and worshipped Him with unfeigned gratitude and simplicity in spite of their failings as a nation.

The report was circulated throughout heaven. They jubilated with God. They took a decision.

The Son was sent down to Ghana. Unlike the Father, who preferred floating on clouds, the Son relished walking on the sea. He came to Ghana by sea.

God decided to give that as a present of appreciation to Ghanaians for honouring him with gratitude. That was in 2007.

Ever since, anytime Women’s Aglow held services at the Independence Square, God was present to refresh Himself. He loves dancing!

The writer is a lawyer.